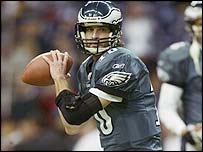 According to the Minneapolis Star-Tribune's blog, the Vikings have agreed to terms with Koy Detmer to be insurance in case both Kelly Holcomb and Tarvaris Jackson can't play this weekend.

Detmer, who last played in a regular season game in 2005 with. . .stop me if you've heard this one. . .the Philadelphia Eagles (when Brad Childress was still their offensive coordinator), is familiar with the Minnesota offense.  As far as I can tell, that's about all he's got going for him at this point, as he wasn't even on an NFL roster in 2007 before signing with the Vikings this afternoon.

So as of now, the quarterback hierarchy looks like this, as near as I can tell:

That's the read I'm getting, anyway.  I don't know why Bollinger keeps getting shoved down the depth chart.  He's been the Vikings' best performer at the QB position thus far.

To make room on the roster for Detmer, the Vikings released CB Ronyell Whitaker. Whitaker will be missed by opposing quarterbacks throughout the league.