Vikings Make Their Second Round Pick

Share All sharing options for: Vikings Make Their Second Round Pick

Well, the poll for which WR we should take at this spot (post-Dwayne Jarrett version) ended up being split between two players. . .Ohio State's Anthony Gonzalez, and Southern Cal's Steve Smith.  So, let's take a look at both of these players, and I'll tell you which one I picked and why. 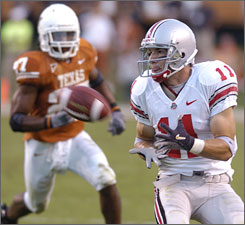 Strengths
Adequate height and bulk...A fantastic route runner who just knows how to get open...Has very good timed speed and quickness...Hands are excellent....Is very smart...An above average blocker who gives a good effort...Excellent intangibles and a hard worker who's dedicated to being the best player he can be...Can also help out as a return man...Still improving, got better every year and has upside.

Weaknesses
Only started for one season in college and was never the main focus of defenses attention...Did not make many big plays...May have some trouble beating the jam at the line...Has some trouble with physical corners...Was shut down in the BCS Championship game (along with the rest of the Buckeye offense) when Ted Ginn, Jr. was injured...Doesn't do much after the catch...May never be a true #1 target.

Strengths
A smooth natural athlete with good quickness...Runs excellent routes and knows how to get open...Has reliable hands...Elusive after the catch...An above average blocker...Good body control...Tough and will work across the middle...Productive, got better every year and had some big games as a senior...A lot of experience.

Weaknesses
Does not play as fast as he times...Lacks a burst and is not very explosive...Size, strength and bulk are average...Struggles to separate, won't stretch the field and is not a vertical threat...Has some character concerns...Was never really the main focus of opposing defenses...Durability is a question...Doesn't have much upside.

So, there you have it.

Having had plenty of occasions to watch both Ohio State and USC last season, what it comes down to between two very similar players is this.

There were many times when I was watching Ohio State that I thought Anthony Gonzalez was the best WR in the Buckeye offense. . .I've never been much of a Ted Ginn fan, and think he's a bit overrated as a WR.  If I was looking for a return man, I'd take Ginn. . .if I was looking for someone to immediately contribute at WR, I'd take Gonzalez.

The Ragnarok has an excellent write-up/scouting report on Anthony Gonzalez for your viewing pleasure.