Share All sharing options for: Undrafted Free Agents Trickling In

The Vikings announced that they signed 16 "street" free agents after the 2007 draft, but that they wouldn't announce who they were until Thursday.  The Star-Tribune's Vikings blog has done some digging and come up with some of the names already.  Twelve of them, to be exact.  Here's the list we've got so far, with links to their profiles at NFL Draft Countdown for the ones that have them.

And, my personal favorite,

Why is the last one my personal favorite?  Well, because if you have the same television viewing habits that I do, you've probably never heard of Joe Anoa'i. . .but you've probably seen a lot of his relatives.  For example: 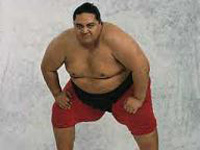 Sika and Afa, The Wild Samoans (Joe's father is the one on the left, actually.)