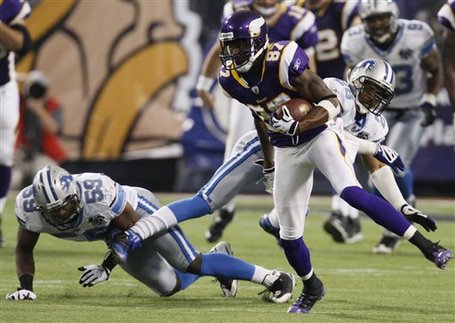 I'll admit that after watching today's game between the Vikings and the Detroit Lions, my immediate reaction was a bit of embarassment. . .almost guilt. . .over the fact that the Vikings, for the second week in a row, had "won ugly."  I even went so far as to go visit our friends at Pride of Detroit to tell them that they had gotten screwed over and probably deserved to win today's game.  Don't get me wrong. . .statistically, the Vikings were the superior team.  But, for some reason, it just didn't feel right to me that the Vikings came out on top this afternoon.

But the more I thought about it, I decided that there was absolutely no reason for me to feel bad about the fact that my favorite team had somehow managed to get themselves back to .500.  Yes, they were supposed to destroy the Detroit Lions this afternoon.  Yes, it was an ugly victory.  Yes, the Lions are a bad football team that was playing a  second or third-string quarterback that was making his first ever NFL start.  Yes, the Vikings got the benefit of some pretty horrendous officiating calls.  Yes, this means that Brad Childress more than likely won't be fired this week. . .and, believe me, nobody feels worse about that aspect of it than I do.

But the reality of the situation is that, as it stands now, we're part of a three-way tie for first place in the NFC North.  And, yes, it was because of an "ugly win."  Hell, do you think our division rivals in Chicago would have been happy with an "ugly win" today?  I flipped back and forth between our game and the Bears/Falcons game, and I'll tell you. . .the Bears got slapped around the Georgia Dome pretty good this afternoon.  Yet, with 11 seconds to go, the Bears had a 1-point lead and appeared to have a victory in hand.  Minutes later, Jason Elam was hitting a 48-yard field goal and the Bears were leaving town with a 22-20 loss heading into next week's game.

Color me crazy, but I think Chicago fans would have been quite happy to "win ugly" today.  If they had, they'd have first place in the division all to themselves.  But as it stands now, like I said earlier, there's a three-way tie at the top of the NFC North.

And as far as the officiating goes?  We're Viking fans. . .we forfeited the need to apologize for actually getting calls from the referees about five seconds after Drew Pearson pushed off.  Yeah, we got some calls.  If we get every big call for two decades straight to go our way like some teams *cough*Packers*cough*, then maybe I'll feel compelled to apologize.  Until then, fat chance.

We can go over some of the negatives during the course of the week. . .and, believe me, they were numerous.  But what were some of the positive things that we can take away from today's game?

Well, for starters, how's about that Bernard Berrian fellow, huh?  Not only was he part of the second-longest pass play in Minnesota Viking history today with his 86-yard pitch-and-catch with Gus Frerotte, but over the course of the past couple of weeks, it looks like he's finally starting to justify that paycheck he's been getting since March.  In his last two games, Berrian has 11 catches for 241 yards and two touchdowns.  That's an average of a cool 21.9 yards per catch.  He was brought in to stretch the field, and to this point, that's finally what he's doing.  If he can continue doing that, this offense should improve. . .well, if the play calling gets any better, that is.

(By the way, does anyone out there know who was involved in the longest pass play in Minnesota Vikings' history?  Answer at the end of the post.)

Speaking of guys living up to their billing, where has this Kevin Williams been for the past couple of seasons?  The best all-around defensive tackle in football was credited with four of the Vikings' six sacks of Dan Orlovsky this afternoon, including one on the final play of the game when the Lions were attempting to get a last-second Hail Mary accomplished.  Williams now has six sacks total on the season. . .which is twice as many as he had in all of 2007 and almost as many as he had in '06 and '07 combined.  The interior line of the Lions had absolutely no answer for #93 this afternoon. . .he kicked people's tails in the rushing game, he kicked people's tails in the passing game, and showed the kind of explosion and quickness that we haven't seen since his first couple of years in the NFL.

Adrian Peterson got back on track this week after a couple of, by his standards, down weeks.  He averaged five yards a carry and went over 100 yards after a couple of weeks below the century mark.  However, he really, REALLY needs to work on that whole "holding on to the football" thing.  AP might be the greatest back in the league, but losing two fumbles in one game deep in opposing territory is unacceptable.  Going into a game against a team as notorious for stripping the ball as the Bears are, #28 is going to have to put in a lot of time at practice focusing on that aspect of his game this week.

And congratulations to Gus Frerotte, who became a member of the 20,000 passing yard club this week.  He needed 174 yards going into today's game, and he passed that during Berrian's big TD catch-and-run.  Surprisingly, Frerotte almost broke the Vikings dry spell of games without a 300-yard passer, and in the fourth quarter had actually gotten to 301 yards passing.

Then, in typical "kick ass offense" fashion, Frerotte threw a swing pass to Adrian Peterson. . .that lost five yards.  That loss put Frerotte at 296 yards for the afternoon, and he never got back above 300.  So, as it stands now, the Vikings' last 300-yard passing performance still belongs to Daunte Culpepper, who put up exactly 300 yards on 25 September 2005 against the New Orleans Saints.

That's all for tonight, folks. . .more on today's game over the course of the day tomorrow.

Oh, and as far as the answer to the above question, the longest pass play in Vikings history took place back 11 November 1962 against the Chicago Bears.  It was an 89-yard connection between Fran Tarkenton and Charley Ferguson.  Unfortunately, the Beloved Purple lost that one to the Bears 31-30 on a late field goal by Chicago's Jim LeClerc.  Ferguson had 3 receptions that day for 130 yards, and all 3 of his catches went for touchdowns.