Share All sharing options for: Vikings/Saints: When "Deserving to Win" Just Isn't Enough

Last night's game between the Saints and the Vikings was nothing short of an emotional roller coaster from start to finish for we Purple faithful.  It started with Drew Brees shredding the Vikings' defense on the Saints' first drive, followed by the first blocked field goal returned for a touchdown in Vikings' regular season history (the Vikings had accomplished the feat once in the post-season).

We then had Antoine Winfield destroying Drew Brees in almost exactly the same way he crushed Jake Delhomme in Week 3, followed by what I like to call a "morning after" touchdown pass from Chester Taylor to Visanthe Shiancoe. . .it was beautiful at the time, but after some time to look back, damn, it was ugly.

Then, the Vikings seemed determined to turn the second half into the Reggie Bush show, and they succeeded for a time, letting Mr. Kim Kardashian return two punts for touchdowns to give the Saints the lead, and you got that same feeling in your stomach that we Viking fans know all too well.  That feeling of "we've played pretty well thus far, and now we're at the point where everything comes apart at the seams."  It seemed like 1-4 was inevitable.

And, then. . .something weird happened.

Just a few snaps after having to sit out for a play after Saints' DE Will Smith decided to get a little too jiggy with him, Gus Frerotte dropped back to pass on 3rd and 16 from the New Orleans 33.  He stood in the pocket, waited, and lofted one down the center of the field for Aundrae Allison.

Or was it for Bernard Berrian?

As the ball hung up in the air for what seemed like minutes rather than seconds, #84 and #87 were streaking toward each other, with Berrian coming from the left side of the formation and Allison from the right.  The ball came closer to Earth. . .Berrian ran into Allison. . .both Vikings fell to the ground. . .and when the field turf settled, Berrian was holding onto the ball in the end zone, and the Vikings were a Ryan Longwell extra point away from tying the ball game.

But there was more.

Drew Brees brought the Saints back out onto the field and, thanks in large part to a 41-yard pass to Billy Miller that ended with a hit that's going to make Cedric Griffin's wallet a little lighter, had driven New Orleans to the Minnesota 28-yard line, where they brought in Martin Gramatica to attempt to take the lead back..  Gramatica had made two previous field goals, and had the aforementioned kick that was blocked by Fred Evans and returned for a score by Antoine Winfield.  To steal a line from Paul Allen. . .Gramatica couldn't miss from there, could he?

But miss it, he did.  And the Vikings took over with 1:59 left on the clock.  The Saints then thought they'd do the Vikings one more favor, because on a 3rd and 3, Saints safety Kevin Kaesviharn thought it would be a good idea to tackle Bernard Berrian on a deep pass attempt by Frerotte.  Of course, he made that decision while the ball was still travelling in Berrian's direction, which is pass interference, and the 42-yard penalty gave the Vikings the ball on the New Orleans 14-yard line.  Ryan Longwell tacked on the game winning field goal, a desperation heave by Brees was intercepted by Tyrell Johnson, and the Vikings escaped from New Orleans with a season-saving victory.

Strangely, when I got home from work today and turned on ESPN's Pardon the Interruption, and one of the topics du jour was, and I quote, "Did the Vikings Win or Did the Saints Lose?"

Yes, apparently the Saints "lost" a game that they trailed 20-10 at halftime and 20-17 after three quarters.  Weird how that happens.  They were, apparently, somehow more deserving of a win than Minnesota.  I, personally, fail to comprehend this.

I understand that the guys in the ESPN booth last night were totally in love with Reggie Bush. . .and, granted, last night Bush gave them good reason to be.  But the Saints are one of the top offenses in football, and here's the result of their actual offensive possessions. . .not counting punt returns. . .after scoring a touchdown on their opening drive:

As the Vikings have learned incredibly well over the course of the Brad Childress era. . .more often than not, one offensive touchdown isn't going to get the job done.  And turning the ball over four times, a couple of which were deep inside Vikings' territory, sure as hell isn't going to get it done, either. 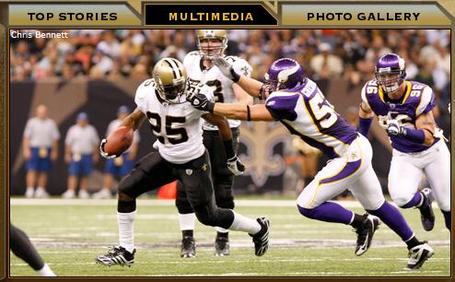 Now, as you've no doubt heard, some people have had a bit to say about last night's officiating, and in particular the play pictured above.  Reggie Bush fumbled the ball away on this play and halted a Saints drive that had reached Vikings territory.  The Saints, for "some reason," felt compelled to place this on the main page of the team website.

I'm going to say this as a fan of the team that's gotten bent over the proverbial table by the referees of the NFL on a regular basis ever since Drew Pearson pushed off.  Yeah, the Saints got screwed on that call.  But the way Sean Payton handled it last night and the Saints putting this picture on their website is a little bit much.

The Vikings, I'm sure, had the means of putting a couple of similar pictures on their website at a couple of points this season.  But I don't recall them putting up a picture of the Colts' Joseph Addai NOT getting into the end zone against the Vikings and being awarded a touchdown anyway, or of the officials in the Tennessee game spotting Justin Gage's 4th and 1 reception a full yard and a half further downfield than where Gage actually got to.  Yeah, there was some questionable officiating in last night's game.  But, as I've heard fans of opposing teams say so many times, referees don't lose football games.  Football players and football coaches lose football games.

The New Orleans Saints didn't "give away" last night's game. . .the Minnesota Vikings took it from them.  And they did it by showing more heart and more guts than they have in any other game of the Brad Childress era.  If I would have told you on Monday afternoon that Adrian Peterson was going to get 32 yards rushing on 21 carries and the Vikings would win anyway, you would have thought me completely insane.  But that's what happened.

We had our first 100-yard receiver since. . .of all people. . .Troy Williamson accomplished the feat in Brad Childress' second game as Vikings' head coach against the Carolina Panthers back in 2006.  Bernard Berrian finally showed some flashes of being worth his big paycheck, grabbing six balls for 110 yards and a touchdown.

As mentioned, we had the first blocked field goal returned for a touchdown in Vikings' regular season history, and the second one in Viking history overall.  The other came in the 1976 NFC Championship game against the (then) Los Angeles Rams, as Nate Allen blocked a FG attempt by Tom Dempsey, and Bobby Bryant returned it 99 yards for a Minnesota touchdown.

And, most importantly, we got to take our season off of life support.  We currently sit just one game behind the Bears in the division, and tied with the Packers (who, contrary to what many of their fans seem to believe, did NOT clinch the NFC North with their lucky victory in Week 1).  We get to host the Lions this week, and then a matchup with Da Bears going into the bye week.  Hopefully we can get into the bye at 4-3 and still in the thick of the division race, if not outright leading it.  With the strength of the NFC East, there aren't going to be any wild card teams coming from this division, so it's NFC North championship or bust.

Thanks to the good folks at Canal Street Chronicles for being fine SBNeighbors this past week, and that's going to conclude things for tonight.  Have a good one, folks, and we'll be back tomorrow with more!