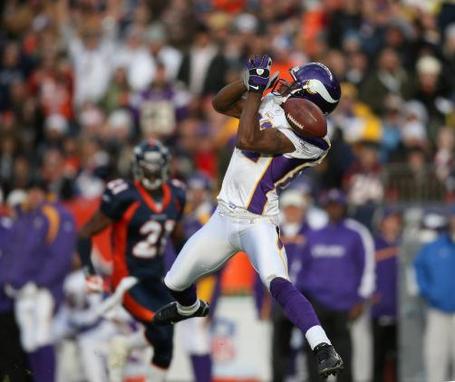 Yes, in case you haven't already heard, Troy Williamson has said that he would like to fight Brad Childress in light of the way he departed Minnesota this off-season.  He says that the incident stems from the way he was treated when he left the team to attend his grandmother's funeral last off-season.

"After that, I had no more respect for Childress," Williamson said. "That's gone out the window, and I don't see that coming back ever. That bridge is burned. ... It just got bad. I knew it was time for me to go. It was just a bunch of personal stuff on my end that he wouldn't let me handle.

"I ain't going to try to dig it back up because I can really, really go at coach Childress, but I'm not going to do it."

Now, don't get me wrong. . .the Vikings did pretty much do a crappy job of dealing with the situation surrounding Williamson and his family when the incident took place.  Sure, they eventually wound up refunding the game check that they fined him and all of that, but it ended up being a PR disaster for the team, and it ultimately led to Williamson making his way out of Minnesota.

Williamson didn't have a very good rookie season, which could possibly have been attributed to being "the guy drafted to replace Randy Moss."  The Vikings gave him every opportunity to improve.  He wasn't particularly good in his second year, either, and his case of the dropsies continued to get worse.  The Vikings sent him to the Nike Vision clinic, they gave him the opportunity to catch 20,000+ balls during the off-season (no mention of how many he dropped), and they again supported him.

Troy Williamson didn't succeed in Minnesota. . .and that, quite frankly, is not the fault of the Minnesota Vikings.  I'm not saying it's Williamson's fault, either, because he obviously worked hard to get better.  The whole thing just didn't work out.  But after the complete lack of production that he provided the Minnesota Vikings, he really needs to point all his anger in a different direction.  He was paid quite handsomely to not produce for the Vikings for three seasons.  He also made a big boy decision about going back home.  Did the Vikings handle it badly?  Yes, as I've already acknowledged.  Did the Vikings attempt to rectify the situation?  As best they could, yes.

And what did Williamson do in return?  Look back up at the picture above.  That's what he did.