Share All sharing options for: Looking Back at Bears/Vikings 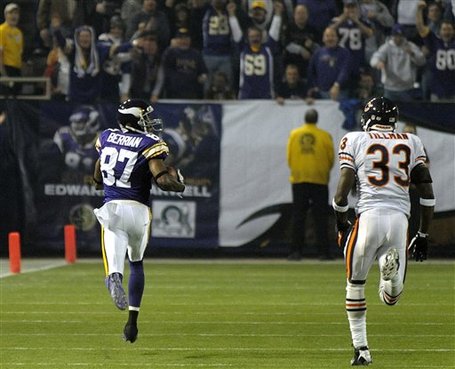 Hey, I can almost see Bernard Berrian from here!

Yes, ladies and gentlemen, almost 24 hours after what happened last night at the Metrodome, the feeling is still pretty awesome.  One of the more dominant games of the Brad Childress era, one of the greatest single plays in Vikings' history, and an all-around outstanding performance from the Minnesota Vikings has placed them alone atop the NFC North. . .for now.

From basically the very beginning of the game last night, the Bears had no answer for any aspect of the Minnesota defense.  At the 8:15 mark of the first quarter, after Kyle Orton threw a touchdown pass to Devin Hester to give the Bears a 7-0 lead, he was 1-for-4 passing for 65 yards and a TD.  For the remaining 51 minutes and 45 seconds, he was 10-for-25 for 88 yards, one touchdown, and three interceptions.

Prior to the interception he threw to Darren Sharper in the third quarter, Orton hadn't thrown an interception in 207 consecutive pass attempts, a mark that established a new Bears' record.  He then proceeded to throw three in his next seven pass attempts, apparently finally remembering that he is, indeed, Kyle Orton.  After Sharper got his first interception of 2008, Ben Leber and Benny Sapp got in on the fun as well, with Leber's interception setting off a Benny Hill-esque chain of events that wound up seeing the Vikings retain possession of the football at Chicago's 22-yard line.

Even after Sapp committed a truly dumb penalty to negate a third-down stop and rookie Matt Forte took the ball down to the Minnesota 2-yard line, the Bears couldn't get through the Vikings' defense.  Four times the Bears inexplicably tried to slam the ball home through the middle of the Minnesota defensive line. . .but with Pat Williams continuing his recent ownership of Bears' center Olin Kreutz, Kevin Williams destroying whatever gets in his path, and Jared Allen turning Bears' tackle John St. Clair into a turnstile, they failed on each and every occasion.  The Vikings put together a spectacular goal-line stand, and Allen concluded it by coming all the way around from his defensive end position to stop Forte on the other side of the formation and stop the Bears on fourth down.

And then. . ."it" happened.  Here's the breakdown of the ensuing play from ESPN:

On first down, offensive coordinator Darrell Bevell called a play that Berrian said he has been lobbying for all season. Lining up in a run formation known as "Tiger," the Vikings had two tight ends on the line of scrimmage.

Berrian trotted out to the far left side. Tight end Visanthe Shiancoe lined up next to left tackle Bryant McKinnie. Tight end Jim Kleinsasser was next to right tackle Ryan Cook. Bevell's play called for Berrian and Shiancoe to run "go" routes. In playground terms, they went long.

Frerotte pump-faked to the right, freezing Payne. Frerotte then looked back toward Berrian.

"Right as I was throwing," Frerotte said, "I saw the corner break to the inside."

Yes, Tillman left Berrian to cover Shiancoe. Suddenly, there was Berrian -- all alone -- along the sideline.

Brilliant move by Tillman. . .a guy who, if he isn't already the single most overrated defensive player in the NFL, is well on his way to capturing that mantle.  Maybe Adewale Ogunleye should have made his cheap shot on Gus Frerotte more worth his while.  (And, yes, I know that Gus flopped like Manu Ginobili after the hit.  But, seriously, what's the over/under on the number of flags that would have been on the field had that hit been delivered by Jared Allen on Kyle Orton?  I'd say at least three.)

All in all, the Vikings' defense racked up three sacks last night (all by Allen, to bring his season total to 11), held the Bears to 228 total offensive yards, forced the aforementioned three Orton interceptions, and showed everyone that the offensive "explosion" that we saw in Chicago earlier this year was a fluke. . .well, half a fluke, anyway.

And let's not forget that, in all the excitement of the goal line stand, the 99-yard touchdown, and the Bears' terrible second-half performance (in the second half, they had 3 interceptions and punted four times), we were treated to another flogging of the Bears' defense by the wonder known as Adrian Peterson.  With his 28 carry, 131 yard performance last night, Peterson has now rushed for a cool 554 yards on 90 carries (6.2 yards/carry) and 8 TDs in four career starts against Chicago in his career.  He now has a solid lead in the NFL's rushing race over Washington's Clinton Portis, as he's the first back in the league this season to reach the 1,300-yard mark.  If the Vikings manage to make the playoffs this year and Peterson can lead the NFL in rushing. . .something that no Viking has ever done, by the way. . .then he's going to merit some serious consideration for the NFL MVP award.  Granted, he won't win it or anything, but he'd merit consideration anyway.

Right now, we're a game up on the Bears, two games up on the Packers, and a victory over Detroit on Sunday afternoon would put the Vikings' in the driver's seat in the NFC North in pretty much every conceivable way.  The important thing is for the Vikings to NOT overlook this Sunday's matchup.  Yes, I know they're the Lions. . .yes, I know they're 0-12. . .yes, I know that they may be one of the worst football teams that any of us have ever seen. . .but with a pretty murderous final three games on the schedule and a big road trip to Arizona coming in two weeks, this Sunday's contest has all the makings of a classic "trap" game.  The Vikings absolutely, positively must avoid the trap. . .a loss to the Lions would not only completely negate all the positivity and good feelings coming from last night's victory, but could send the Vikings spiraling in the completely opposite direction.