Who will Win Purple Bowl IV?

Share All sharing options for: Who will Win Purple Bowl IV?

In what's sure to make Paul Lukas of ESPN Page 2 and Uni Watch fame start dry heaving, the two purplest teams in the NFL will do battle on Sunday at the PurpleDome Metrodome. Wait, sorry, I better be official here--The Mall Of America Field at The Hubert H. Humphrey Metrodome. (Ugh.)

Yes, there will be enough of The Color Purple on the field to keep Oprah, Prince, and even Grimace satisfied as the Ravens and Vikings meet for the fourth time ever and the first time in Minnesota. But which shade of purple will shine brighter on Sunday?

It doesn't take much analysis to see that these two teams share a lot more than jersey colors. Both teams have run-first offenses that have just started to enjoy the luxury of an effective passing game this year. Brett Favre and the Vikings receivers are finally the compliment that we've been looking for to The Best Player in the NFL Period. On the other side, Joe Flacco has made a meteoric leap in his sophomore season to compliment the three-headed Ravens RB monster of Ray Rice, Willis McGahee, and LeRon McClain.

And of course, both teams have perennially excellent defenses that give offensive coordinators nightmares.

Wait a second...are we sure about that? Or are the Minnesota and Baltimore defenses getting by more on reputation than results?

It seems blasphemous to even mention, but maybe the defenses of the Vikings and Ravens aren't exactly carrying their teams these days. As far as yardage goes, the Ravens are 10th and the Vikes are 14th in the league so far. Both are still top 10 against the rush, but not in the top 3 like they have each been the past three seasons. The Vikings are 18th against the pass, which isn't too surprising since we're usually in the bottom half there. But the Ravens are currently 26th against the pass in 2009. That's one spot behind the Rams! I don't put too much emphasis on yardage numbers in the NFL, but any time you're behind the Rams in anything, it ain't good.

For the Vikings, it isn't all about the yardage. I know the Ravens have a lot of people that can hurt you, but I'm most afraid of Todd Heap this week. Why? Because the Vikings have made every tight end they've faced so far look like 1996 Shannon Sharpe. There have been times this season where the Vikes D has left the opposing tight end with so much space that it looks like he just he just cleared the room with a fart. They also just gave up 27 first downs and 400 yards to the Rams. Any time you allow the Rams to do that, it ain't good.

Baltimore's once-indestructible defense has been just pretty good in 2009. Their cornerbacks have looked more like turnstiles on some plays, and their lack of pressure is allowing opposing teams to move down the field. Maybe they're still getting used to Greg Mattison's new defense compared to Rex Ryan's former blitz-wacky scheme; maybe they're just a year older and a touch slower.

As for God's Linebacker Ray Lewis: I believe he is without a doubt the best defensive leader in the NFL today, but he's nowhere near an elite player any more. Ray-Ray makes everyone around him better; it shows when he's the last one in on a gang tackle and celebrates like he made the play all by himself. If it wasn't for his leadership, all his teammates wouldn't have been in the right place to make the tackle a full three seconds before he got there!

(Ray, if by some off chance you're reading this, I'm just kidding around. No need to "obstruct any justice" on me OK?)

That said, the Vikes are still 5-0 and the Ravens are still a respectable 3-2 (and could be 5-0 with a little help from those stinkin' refs, or a little more discipline on defense, depending on who you ask). Both teams are elbow deep in the playoff hunt. Heck, before the season, Ravens-Vikes was my Super Bowl matchup. (Now? Gun to my head, I'd have to choose The Manning Bowl. But there's still plenty of season to be played. Oh God, did I just say "gun to my head" a paragraph after making fun of Ray Lewis?! Let's move on, quickly!)

(More analysis and my Week 6 picks after the jump)

In the end, I see these teams pretty darn even both chromatically and personnel-wise. I think this game comes down to one of my favorite time-honored football cliches: whoever makes the fewest mistakes wins. It's no coincidence that the Vikings are undefeated and happen to lead the NFL in turnover margin. Contrast that with the silly mistakes and late meltdowns that the Ravens have endured the past two weeks, and I like MY purple team to win on Sunday. Unless of course Matt Birk memorized the entire Vikings playbook and recites it perfectly to the Ravens coaching staff. Which is entirely possible, because Matt Birk went to Harvard. (Welcome back Matt!)

Finally, I'd be remiss if I didn't keep with my weekly theme of posting barely-football-related gratuitous pictures of women in my article. After all, the Vikings are undefeated when I do so, and I'd hate for us to lose just because I didn't do my part!

As most of you know, when the original Nordic Vikings would conquer a foe, they would routinely burn their land and steal their women. 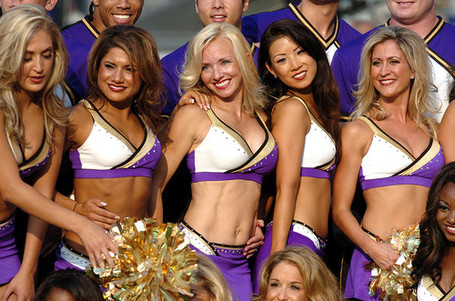 After our modern-day Vikings conquer Baltimore on Sunday, and after viewing this picture of the Ravens cheerleaders, Baltimore can just keep their land as far as I'm concerned. (Besides, I watched "The Wire". That city scares the living bejeezus out of me.)

Texans over BENGALS: Boom! Upset alert right out of the gate! This has Letdown Game written all over it for Cincy. And if any franchise knows how to do letdown the right way, it's the Cincinnati Bengals.

PACKERS over Lions: Of all the atrocious teams in the NFL this year, at least Jim Schwartz has the Lions giving a shit. And if I happen to get this pick wrong, I wouldn't give a shit. Actually, I'd be thrilled.

JAGUARS over Rams: I'd rather stand nude in the Sahara Desert for three weeks straight with no suntan lotion and then put on clothes made entirely of burlap than watch this game.

Giants over SAINTS: Game of the Year so far. Basically the Anti-Jags/Rams game. I'm picking the G-Men here because I like their defense more than the Flying Sharpers.

STEELERS over Browns: My Eliminator pick of the week, which shouldn't come as much of a surprise. Even though the Browns are flying high from their thrilling 6-3 shootout over the Bills last week with Derek Anderson setting single-game passing records (the bad kind), they're still Cleveland.

Panthers over BUCCANEERS: Hey, someone has to win. Although both teams will try very hard not to.

REDSKINS over Chiefs: Yes, the Skins are playing their sixth consecutive winless team. And I thought the Vikes had an easy schedule so far! Too many people picking the Chiefs to upset here, so I'll stick to the more offensive Native American stereotype.

Eagles over RAIDERS: The Raiders have become officially too easy to make fun of. If Al Davis was still alive, he would never let this happen.

SEAHAWKS over Cardinals: After the 49ers crapped the bed last week, the NFC West is officially back up for grabs! This is kind of like saying that Tori Spelling is back on the market. Sure, I guess it counts for something, but I wouldn't really get excited about it.

PATRIOTS over Titans: I have an exclusive transcript of the Titans Radio broadcast...from the FUTURE! Here's a sample of Sunday's broadcast:

JETS over Bills: At this rate, Buffalo residents will help pack the trucks for the Bills' inevitable move to Toronto.

FALCONS over Bears: The Falcons looked waaaay too good last week for me to pick against them this week. Plus I hate the Bears, so it makes my decision even easier.