No Aaron, That's Not a Zombie Chasing You; it's Jared Allen

Share All sharing options for: No Aaron, That's Not a Zombie Chasing You; it's Jared Allen

It's Halloween Weekend, which is far and away my favorite drinking holiday of the year.

"Boondock Saints II: All Saints Day" comes out today. (Although apparently it's not a nationwide release...but still, it's the sequel to one of my favorite movies of all time!)

I may have a chance to head to Green Bay on Sunday to interview Bart Starr, Paul Krause, and Jan Stenerud thanks to the ongoing JCPenney/Van Heusen Hall of Fame promotion tour. (Still pending, but it sounds promising! If you haven't read MilCardFan's interview with Krause yet, do it. Great read.)

If you guessed that I'm more excited than a puppy with two tails right now, you'd be correct. If you thought that I wasn't going to tie in a cheesy Halloween gimmick throughout this article, then I'd like to be the first to welcome you to our site.

First of all, there is one irrefutable reason why Halloween kicks so much ass. No, it isn't candy--it's because this is the one day of the year that gives every girl full license to dress as slutty as they want without any social repercussions. Think about it--98% of women's costumes are "Sexy <fill in the blank>." Sexy Cat, Sexy Police Officer, Sexy Devil, Sexy Cowgirl, Sexy French Maid (is there a Non-Sexy French Maid?)--they're all variations of the same basic premise. (For instance, my girlfriend is going to be Sexy Rapunzel at our Halloween party tonight, and I couldn't be happier. Over/under on off-color hair-pulling jokes from me tonight: 11.5.) Throw in the fact that everyone's inhibitions are inexplicably lowered by about 80% when wearing a disguise of any sort and you got yourself one hell of an entertaining holiday.

(Note to everyone with younger kids: sorry for reminding you how much fun Halloween used to be a few years back. I'm sure you'll have fun trying to put your kids to bed tomorrow night after they have ingested enough sugar to put a wildebeest into a coma.)

As for Sunday's game, I won't bore you with minutiae about each team. It's the Vikings and Packers. We're sorta familiar with each other already. Instead, I'll dole out the classic Halloween costumes that best suit various personnel on each team. (See, I told you there would be a cheesy Halloween gimmick!)

Zombies: They're always coming after you. It seems like you're surrounded by them at every turn. They won't stop until they're on top of you, ripping you limb from limb and eating your brains. Sounds like Jared Allen and rest of the Vikings defensive line to me!

Decapitated Zombies: Zombies are scary. Dead zombies are just gross. They don't move around at all; they're decrepid, smell awful, and don't pose a threat of any kind. That pretty much sums up the Packers offensive line, no?

Mummy: This costume goes to Aaron Rodgers. Even though everyone assumes a mummy should be dead and is bandaged up from head to toe, he's still scary and hard to kill. Rodgers has taken an absolute beating all year thanks to the Decapitated Zombies, yet he's still the second rated passer in the league. Even as a Vikings fan, I have to appreciate that. He gives the Packers a chance to win all by himself at times.

Werewolf: This one has to go to Brett Favre. Just like a werewolf, he can be a lethal, unstoppable force. But the drawback is that you're never sure when he's going to change in certain conditions. Even worse, werewolves can't control when they'll change. I know Favre has been more or less outstanding in 2009, but I wonder if returning to Lambeau will be his Full Moon. I don't think there's a stat line from him that would surprise me. 24/28, 338 yds, 4 TD, 0 INT? Sure. 16/43, 113 yds, 0 TD, 4 INT? I could see it. I'm just hoping we get the cool Michael J. Fox "Teenwolf" werewolf, not the creepy Jack NIcholson "Wolf" werewolf.

(More costumes and my Week 8 NFL picks after the jump.) 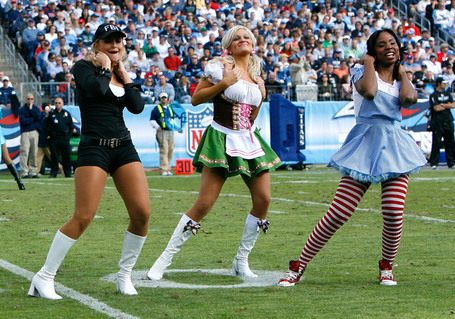 I told you Halloween is awesome.

Vampire: While vampires are immortal and can strike out of the dark at any time, they can just as easily be killed by showing them a little daylight. This costume goes to the entire 2009 Vikings team. At times, it has looked like nothing can kill us. Thanks to the likes of Percy Harvin, Sidney Rice, and AP, we can go for the other team's throat without warning. Unfortunately, our tendency to give up the big play this year has left us very vulnerable--every time we show the other team some daylight, a sure win turns to dust. The Ray Rice plays, the Pittsburgh defensive TD's, the San Fran blocked field goal, the Jermichael Finley Show in Week 4...all of the big plays have made victories uncomfortably close, and it cost us a win last week. If we want to leave Lambeau with a stranglehold on the NFC North, we can't let big plays be our stake through the heart.

Purple Jesus: What's that you say? Adrian Peterson isn't a traditional costume at all? You think I have to assign something like "Ghost" or "Goblin" to the best player in the NFL? Go ahead, I dare you to try and categorize AP with a Halloween gimmick. See what happens. Isn't that right, William Gay?

The Vikings proved they were the better team a month ago. Nothing has happened in the past month to change that fact. Unless Werewolf Favre shows up at the wrong time, I don't see this game going any different than the one at the Dome.

As for the rest of my Week 8 NFL Picks (home team in CAPS):

BEARS over Browns: My Eliminator pick of the week. (I'm 7-0 and still alive for those keeping track at home.) At this point I think Cleveland fans should start visiting people with terminal illnesses to get a new perspective on life. I'm not saying the Browns fans would be cheered up though. I think someone dying might realize it could be much worse. Their suffering will probably end soon, while there's no end in sight for the Browns.

COWBOYS over Seahawks: Who knows which Seahawks team will show up, but one thing is for sure: Miles Austin is scary. And he's a pretty good wide receiver. 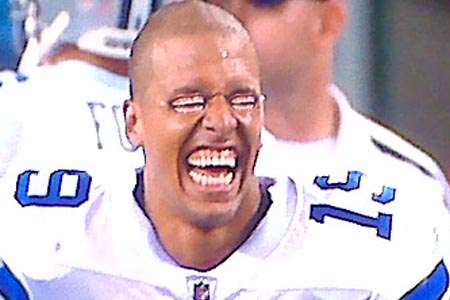 LIONS over Rams: Oh my God, the Detroit Lions are favored in a game! If you even think about watching this game, go take a shower to get the filth off of you.

Texans over BILLS: Houston is the only road favorite this week. Isn't that SPOOKY?? (And you thought the Halloween theme was over!! MUUUUAHAHAHAHAHA)

COLTS over 49ers: Alex Smith rises from the dead to take over as the starter for the Niners. (Boom! More Halloween analogies! I'm unstoppable!) He'll have plenty of chances to prove that his arm is superior to Shaun Hill's, because they're going to be down by a lot the whole game.

JETS over Dolphins: For both teams, the less their quarterback is involved in the offense, the better their team performs. After last week's games, it looks like the Jets have figured out how to minimize Mark Sanchez more than the Dolphins can hide Chad Henne.

CHARGERS over Raiders: You know how most teams try to "keep the ball out of so and so's hands?" I think Norv Turner's strategy this week should be "keep the ball IN JaMarcus Russell's hands." Nothing but good things can happen for the Chargers.

Jaguars over TITANS: I'm going to make Vince Young prove he doesn't suck before I pick his winless team, even if it is against a mediocre Jags squad.

CARDINALS over Panthers: I still don't completely trust the Cards, but they look poised to repeat in the NFC West after their big win in New York. Meanwhile, John Fox is like the corner guy for a boxer that's too proud to throw in the towel. His guy is just getting murdered out there, yet he still won't pull the plug. Or maybe he just knows that Jake Delhomme's backups are equally as awful.

Giants over EAGLES: The G-Men haven't looked great the past two weeks, but Brian Westbrook is still...get this...QUESTIONABLE for the game thanks to a concussion last week! I wonder who is second place all-time being listed as Questionable for a game, behind Westrbook's career mark of 3,431? Shouldn't his nickname be "Q" by now? He has caused more agony for fantasy owners than all other players combined. My roommate last year nearly went bipolar after worrying about Westbrook's playing status so much.

SAINTS over Falcons: The New Orleans offense is making my Madden team jealous. Drew Brees turned the ball over four times last week and they still lit up the Dolphins for 46 points. I'm not picking against the Saints until someone outscores them.