And On the Ninth Week, They Rested.

Share All sharing options for: And On the Ninth Week, They Rested.

If you gave every NFL team the option of when they wanted their bye week, I'm guessing most teams would pick Week 9 because it is the precise median of the 17-week NFL season. Thankfully, the Vikings get that perfect weekend off to kick back and enjoy their perch atop the NFC North. Of course I don't know any of the players personally, but here's how I envision some of them spending their free time this week:

Jared Allen: Hunting at least four species of wild animal using a variety of weapons: bow, shotgun, rifle, his bare hands, and his mullet. The nice thing for Jared is that he doesn't have to change his wardrobe at all when he goes hunting. (Speaking of hunting, I'm heading up to Warroad for my annual deer hunting trip in a few hours, which is why my weekly picks are coming out a day early. Didja see da turdy pointer?)

Brad Childress: Working the drive-thru at McDonald's. (What, you didn't think Mickey D's was just going to give him that headset did you? He has to work it off!) Childress also plans to watch his favorite DVD, "Awesome Beards in History, narrated by Chuck Norris" about five or six more times.

Adrian Peterson: Destroying brick walls and large construction equipment by simply lowering his shoulder into them. You know, just to stay sharp.

Percy Harvin: Making room in his trophy case for the 2009 NFL Rookie of the Year Award. And thinking up more mysterious illnesses to get out of practice during the week.

Asher Allen: Hopefully throwing away his "How to Tackle, by Deion Sanders" book.

Chris Kluwe: Finally beating "Through the Fire and Flames" on Expert in Guitar Hero III and upgrading his Dark Elf Mage to Level 50 on World of Warcraft.

Tarvaris Jackson: Watching game film from last year's Arizona game alone in his house and quietly sobbing. "I had FOUR TOUCHDOWNS! FOUR! I CAN DO IT TOO!"

Sage Rosenfels: Finish writing his novel titled "The Easiest Money I Ever Made: My Time with Brett and the 2009 Vikings."

Bryant McKinnie: I actually know this one. He went through the "ESPN Car Wash" yesterday, appearing on roughly 42 ESPN radio and TV segments. This is a much better alternative to his original plan of fighting in parking lots clubbing in Miami.

(More bye week thoughts and my Week 9 picks after the jump.)

Obviously, the Vikings are in great shape halfway through the 2009 season. They're 7-1, they already have 5 road games out of the way, they pick up after the bye with three home games, and if that wasn't enough, the first one is against the Lions!

But as The Wolf uttered one of my favorite lines of all time in Pulp Fiction, "Let's not start sucking each other's d---- just yet."

We all remember the team that our quarterback was on last year, right? The Jets started 8-3, then Favre got hurt and the wheels fell off. Yes, I know, this team is different, and undoubtedly better overall. I'm just sayin', OK? Of any fan base, we Vikings fans should know that a season can turn at any time without warning. We have a looong way to go before we start seriously talking about that February game in Miami, especially with that team in New Orleans putting up 40 points a game at will. But so far, so good, right?

Let's just hope that the Vikings take this most opportune time to rest, recharge, and be ready to make the second half of the season even better than the first.

Now for my Week 9 NFL picks (home team in CAPS):

FALCONS over Redskins: My Eliminator pick this week (still going at 8-0). I have always loved Clinton Portis' wild characters and costumes he thinks up during press conferences. This year, he's even wearing them on the field! Although I'm not sure "Washed-up NFL Malcontent Running Back" is quite as funny as "Dolla Bill."

BEARS over Cardinals: I wouldn't bet your money on this game. Have two teams ever looked so good and bad on a week-to-week basis? I'm taking the Bears here, but I wouldn't be surprised by a 40-point blowout either way in this one.

Ravens over BENGALS: Big-time revenge game here; Baltimore had their first meeting locked up until they went all penalty-happy. Fun drinking game if you're watching this one: drink every time the announcers mention "leader", "motivator", or "intensity" when referring to Ray Lewis. You should be bombed halfway through the second quarter.

COLTS over Texans: It only took Houston seven and a half years to get two games over .500! Congratulations! I'm a little worried about Indy's rushing attack, but the Colts are in the "not picking against them until they lose" category with New Orleans.

JAGUARS over Chiefs: If I was Maurice Jones-Drew and my team fell behind early to Kansas City on Sunday, I would strip the ball from David Garrard and run it myself every time a pass play was called.

PATRIOTS over Dolphins: Like I'm going to pick against Bellichick at home when he's had two weeks to prepare for a gimmick offense.

Packers over BUCCANEERS: Give the Packers credit--they have looked AMAZING against awful teams this year. Good work Pack! You're 4-1 against teams not named the Vikings!

SAINTS over Panthers: It looks like John Fox is finally figuring out that his rush offense is approximately 48 times more efficient than his pass offense...but it's hard to run the ball a lot when the Saints are putting up Arena League scores.

GIANTS over Chargers: The Chargers are 0-3 against teams with winning records. Believe it or not, the Giants still have a winning record.

49ERS over Titans: Although the Niners seem to have mastered the art of "How to Look Good and Still Lose", I think they'll get a big enough lead in this game to not have to worry about their new skill.

Steelers over BRONCOS: Like Christina Hendricks and Lindsay Lohan, these two teams seem like they're heading in opposite directions. 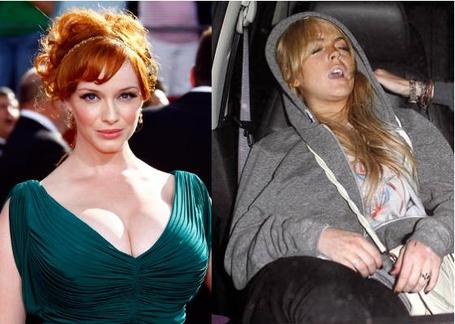