Share All sharing options for: Time for the Road to the NFC Championship to Take a Detour

The Arizona Cardinals, defending NFC Champions, are well on their way to winning their second consecutive NFC West title this year.

But it's true. Arizona somehow made the Super Bowl last year. The same team that Tarvaris Jackson torched for an easy Minnesota 35-14 win in Arizona last year. And even after Vince Young gave Matt Leinart an acid flashback of the 2006 Rose Bowl last week, the Cardinals are still perched atop their division by two games. (Note: I totally didn't mean to make the lame "Cardinals/perched" pun there, but I'm not surprised that I accidentally did.) Technically, the road to the NFC Championship still runs through Glendale, AZ.

But only until Sunday night, if everything goes well for the Vikes. A win for the Purple means the road to Super Bowl XLIV takes a detour away from Arizona.

If the Vikings prevail in the desert, they'll guarantee that Arizona would get the third seed in the NFC at the very best, assuring the Cardinals will have to go on the road to make it back to the Super Bowl. (Yes, I realize they won a road game to get there last year, but they still won the NFC Championship at home. Just stay with my flimsy detour theme here. I posted a picture of a sign and everything.)

But just like creating real detours, we shouldn't expect this one to go smoothly. Yes, Favre is exponentially better than T-Jax. However, we're not the only team that has a Social Security-eligible quarterback that's still playing well. I know Kurt Warner missed last week's game, but I'd be surprised if he didn't play based on what I've heard this week. We have a strong core of receivers in El Sid, Percy, B-Twice, and Shank. But Larry Fitzgerald is still the best receiver in the game (you can mention Andre Johnson here, but he's tied with Fitz at the very best). Anquan Boldin and Steve Breaston are nothing to sneeze at either. If ever there was a game for Antoine Winfield to make his glorious return to the field, it's this one.

And would you look at this--the Cardinals even brought a little bit of a running game this year. They even average more than 2.3 yards a carry! Beanie Wells and Tim Hightower aren't greatest backfield committee ever (that's Tecmo Bowl Bo Jackson and Marcus Allen, of course) but they've added a dimension to Arizona that wasn't really there last year.

Most of us know that stopping the Cards' offense will be tough. But what about the D? From what I've seen of Arizona and learned from the guys over at Revenge Of The Birds, they're better than the numbers show. They're 24th in total yards, but still in the top half of the league in points allowed and tied for fourth in sacks. Defensive lineman Darnell Dockett could give our line some trouble. Karlos Dansby leads the team in tackles and will be a tough test for our running game. Dominique Rodgers-Cromartie is not only annoying to type out, he's also annoying to play against. If Favre can't duplicate his zero-interception November, DRC is always a threat to take picks back to the house. I'd still take Minnesota's defense over Arizona's any day, but it doesn't mean we'll be able to duplicate the easy day in the desert we had last year.

While it would be nice to take another step towards Dome-field advantage, it would also be good to get another victory against a winning team. The only issue the critics have taken with Minnesota this year is "who have they played?" To be honest, the critics have a point. As Bill Simmons said today in his article:

A win on the road over the 7-4 Cards would give us a little more credibility heading towards the playoffs.

Unfortunately, the detour from Arizona might go south to New Orleans even if Minnesota is victorious on Sunday. I'm sure most of you saw the Saints absolutely disassemble the Patriots on Monday night. The Saints offense is formidable to say the least, but that's not what worries me most about N'awlins. That Superdome crowd was absolutely BONKERS the entire game. Could you imagine them in an NFC Championship Game with the franchise's first Super Bowl appearance on the line? My ear drums are throbbing just thinking about it. Let's hope the Saints drop a couple games down the stretch so we can show them how loud the Metrodome can get in late January. But first thing's first--let's start the construction for the detour on Sunday!

COLTS over Titans: These teams are six games apart in the standings, yet they may be the best two teams in the AFC right now. The Titans make an intriguing upset pick here--until you realize it's still Vince Young vs. Peyton Manning. Young is a winner, but he still throws like Uncle Rico.

Texans over JAGUARS: Would you ever pick either of these teams to win a game if your life depended on it? This game could a blowout either way and I can honestly say I wouldn't be surprised. Let's just move on before I change this pick like I already have six times.

Broncos over CHIEFS: The Chiefs as a team are as broken as Tiger Woods' Escalade. But don't tell that to Jamaal Charles, your 2009 Late-Season Fantasy Pickup From A Terrible Team MVP!

Saints over REDSKINS: Yeah, that whole "Detour to Minnesota" theme of my column isn't going to get any help from Washington this week.

BENGALS over Lions: My Eliminator pick of the week--still alive at 12-0! If the Bengals lose two games in the easiest stretch of scheduling ever (Oakland-Cleveland-Detroit), they should be relegated to the UFL.

PANTHERS over Buccaneers: Jake Delhomme is out this week. Does that help or hurt Carolina's chances? Really, I'm serious. I've never even heard of Matt Moore until this week, but I can't imagine he'd be any worse.

Eagles over FALCONS: No Matty Ice for Atlanta this week. Which means they'll have to switch to McNabbelob Golden Light.

Chargers over BROWNS: I literally ran out of jokes to make about the Browns. So instead, I'll treat you to the best NFL theme song ever:

As a bonus, I'll also treat you to the Charger cheerleaders: 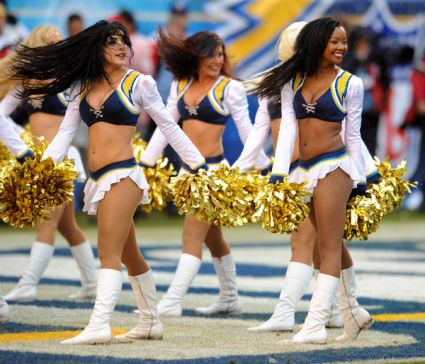 There--I bet you've forgotten all about those rotten Browns by now!

GIANTS over Cowboys: It's December. You know what that means Cowboy fans! Time for some melting down!

49ers over SEAHAWKS: Meh. I just need Vernon Davis and Frank Gore to have big weeks for me to clinch the regular season title in one of my fantasy leagues. So I'm picking San Fran.

Patriots over DOLPHINS: The Patriots don't lose two games in a row. I think it's a league rule or something.

Ravens over PACKERS: I have a bunch of Packer fan friends that are heading to Lambeau for this game. Please oh please, Baltimore, ruin their day for me!

Season so far: 123-54 (including getting Thursday's game wrong)