Share All sharing options for: Reason Number 845,927 Why Jared Allen is Awesome

So, you're the highest-paid defensive player in the National Football League. . .well, you used to be, anyway. . .and you're coming off of a successful 2008 season.  You've been clean and sober for a couple of years, and everything appears to be going well on pretty much every front for you.  How do you celebrate?

Why, you strap on a flak vest and a helmet and go on a USO tour to Iraq, that's what you do!

Vikings' defensive end Jared Allen, along with Cardinals WR Larry Fitzgerald, Giants LB Danny Clark, and Rams LB Will Witherspoon, will be going on a tour of U.S. bases in the Persian Gulf this week.  This is something that NFL players have done since back in 1966 during Vietnam.

Outside of his long-time support for the USO, Allen also has a personal stake in taking a trip to Iraq.

"My little brother just joined the Marines, so I want to go over there and check it out before he does," Allen said. "Just trying to be a good big brother."

Allen's uncle, Ray, was also a 23-year veteran of the U.S. Marine Corps. 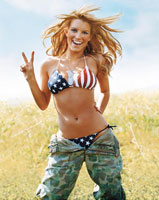 As someone who's had the privilege of seeing the USO do what they do up close, there's something special about the entire thing.  When I was in Bosnia back in 2001, we had the USO folks come through and do a show for us.  There weren't any NFL players on our tour (though there were cheerleaders for a team that slips my mind at the moment),  but the people that were there were overwhelmingly supportive and gracious to all of the troops.  Our particular show featured Wayne Newton (who had just taken the reins of the USO from an ailing Bob Hope), Rob Schneider (who is far funnier in person than he is in the movies and on TV). . .oh, and Jessica Simpson, who did things for camouflage that had never been done before and likely haven't been done since.

(And no, that picture wasn't from the USO trip.  Are any of you going to complain?  I didn't think so.)

With these men and women being away from their families for so long, organizations like the USO are godsends.  Kudos to Allen, Fitzgerald, Clark, and Witherspoon for supporting such an outstanding cause.