Where Gonzo Talks About the First Day of the NFL Draft

Share All sharing options for: Where Gonzo Talks About the First Day of the NFL Draft 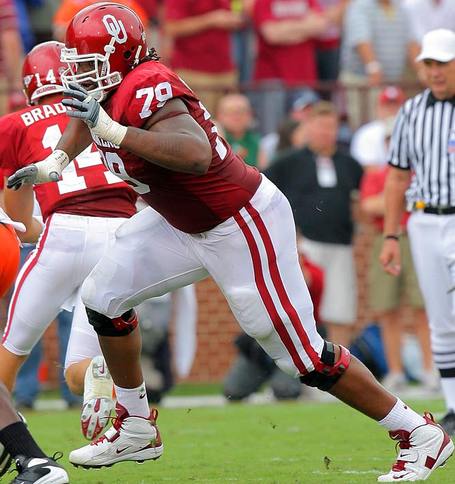 "I'm no football expert, but I know what I hate. . .and I don't hate this."
-C. Montgomery Burns, American entrepreneur (sort of)

Yes, ladies and gentlemen, the first day of the NFL draft has come and gone in pretty much record time.  The first round only lasted three hours and forty-two minutes, the fastest since the league went to 32 teams by a long shot.  Our Beloved Purple did quite well for themselves, if you ask me.  The Cleveland Browns were thwarted in their quest to acquire every pick in the sixth round of the draft, the Broncos had five selections in the first two rounds and somehow found a way to not take Rey Maualuga with any of them, and Al Davis. . .well, he's still Al Davis, and we wouldn't have it any other way.

In the interest of equal time, since we already had a story with a picture of Minnesota's first round pick in it, you'll see to your right a picture of Minnesota's second round draft pick, Oklahoma offensive tackle Philip Loadholt.  As you can see, Loadholt is rather large, standing in at 6'8" and tipping the scales at 335 pounds.  Most importantly, he has a very good chance of pushing Ryan Cook out of the starting lineup, which is something that I think we're all looking forward to.  I know I am.

Drafting a tackle to play tackle.  Crazy, isn't it?

So, yes, I love the Loadholt pick.  I'm also coming around on the Percy Harvin pick, and will have something more extensive on it here shortly.  What I have to say about it right now is that if Brad Childress went down to Gainesville this past week, had a heart-to-heart with Harvin, and decided he was worth the risk. . .well, then, he's be worth the risk.  What I'm interested in is to see how the Vikings will utilize him in the context of their offense.  You don't take a guy like a Percy Harvin without having some idea of how you'd like to use him.  Yes, yes, I know he got busted for pot before the Combine.  But, after the pick was made, a couple of things occurred to me. . .

1) The last wide receiver we drafted in the first round with "character issues" was that Moss fellow back in 1998.  That seemed to work relatively well.  I'd rather my receivers have "character issues" than "watching the ball bounce off your face mask rather than catching it" issues.  (See also:  Williamson, Troy)

2) Last season, we sent a first round selection and two third round selections to the Kansas City Chiefs to acquire a guy that, before that, was basically an alcoholic that had picked up two DUI convictions in the span of five months.  That seems to be working okay thus far.

So, yes, all in all I think the Vikings have done well for themselves on Day One of the draft, and I'm very much looking forward to seeing what transpires tomorrow.  I'm also happy that Day Two has the more "traditional" draft start time of 9 AM Central rather than having to wait until 3 PM.

Some of my other observations from Day One of the 2009 Draft from around the league.

--If, at any point in my tenure as the head guy at this site, the words "Good job, Al Davis" or any variant thereof come across my keyboard, please have somebody track me down and just pummel me with a heavy, blunt object until I lose consciousness.  I mean, seriously. . .it's not even the Heyward-Bey pick that kills me, although I personally think it was awful.  They took a guy in Round Two. . .and, frankly, I can't even remember the guy's name. . .that Mel Kiper had rated as the seventy-third best safety in this year's draft.  Really, it might have been the biggest reach in the history of the draft, and I can say that without exaggeration.

I'm going to hang out by my phone tomorrow, in case the Raiders would like to draft me at some point.  I've been working out.

--As far as the NFC North, the two teams that did have Day One selections had some good and some bad.  B.J. Raji was a good pick for the Packers at #9, and he should help ease their transition to the 3-4 defense.  LB Clay Matthews, on the other hand?  Doesn't worry or impress me in the least.  I am glad, however, that the Packers had to give up as much as they did to get a guy that, frankly, isn't that good.

The Lions did a good job. . .as well they should have, what with three of the first 33 picks at their disposal.  I can't believe that Matthew Stafford is going to get almost $42 million in guaranteed cash, but that's where we are in the NFL these days.  (Rookie wage scale, anyone?)  They also got the best tight end in the draft in Brandon Pettigrew.  Their pick of Louis Delmas at the top of Round Two is a bit of a head-scratcher, particularly when they could have used an offensive lineman, but he was one of the top-rated safeties in the draft, so I suppose it could have been worse.

The Bears?  No Day One picks.  Makes the analysis very easy.

--I really don't know how Rey Maualuga not only went behind both his USC linebacker teammates, but fell out of the first round entirely.  Maybe he was night putting with the daughter of the dean or something, I don't know.  The Bengals got themselves a very nice steal at the top of the second round.

We'll have more observations from the draft tomorrow as the draft moves along.  Until then, I hope you enjoyed the double-barrelled coverage that we had of Day One, and we'll be back for more fun and excitement tomorrow.  Have a good one, ladies and gentlemen!