With last week's OTAs, much of the buzz surrounding the Minnesota Vikings came from the fact that the team was experimenting with what, to this point, has been deemed the "Wildcat" formation. It took the NFL by storm in 2008 when the Miami Dolphins pulled it out in a game against the New England Patriots. Clearly, the Patriots weren't expecting such trickeration from the Fish, as the Dolphins scored four touchdowns in six "Wildcat" plays against New England en route to a 38-13 thrashing of the Patriots.

Now, I don't know if this is going to catch on or not, but I want to take this opportunity to dub the Vikings' version of this offense the "Loki" formation, after the Norse god of trickery and deception. Why? Because everyone seems to be calling theirs the "Wildcat" or the "Wild" something-or-other. We should strive to be different, darn it. Like I said, if it catches on, it catches on. . .if it doesn't, well, then I'll be the only person referring to it in that manner. It's a win-win either way, really.

So, after the jump, let's break down a bit of the Loki formation and what it can potentially do for the Vikings.

The above video shows the three basic plays that we're going to be looking at in this particular piece, as they're the three "staple" plays of the Loki formation. The man diagramming the plays is David Lee, who in this video was the Offensive Coordinator at the University of Arkansas and is currently the Quarterbacks Coach with the Miami Dolphins. Arkansas ran what was called the "Wild Hog" formation, with star running back Darren McFadden taking the snaps from center and Felix Jones playing the role of the wingback in the offense.

The main upside of the Loki formation from a rushing standpoint is that it turns every play into an 11-on-11 situation. In many running plays, the action is 11-on-10, with the quarterback handing the ball off or pitching it back to the running back, followed by a lot of standing around and watching. In the case of the Loki, with the quarterback lined up wide (as we'll see in the formations here shortly), somebody has to account for him on the outside, and that turns things into an even battle. Now, as we've all seen throughout the Brad Childress era, the Vikings are pretty darn good at running the football when it's 11-on-10. Giving them an extra blocker could take this rushing offense from "great" to "freaking amazing."

The Vikings appear to have many players that could work themselves into the Loki formation in various roles, and in fact were rumored to have Percy Harvin, Chester Taylor, and Darius Reynaud all taking direct snaps in this formation. Adrian Peterson would, no doubt, work into this formation as either the wing back or taking the snaps, depending on the play. Speaking of the plays, let's take a look at the three main staple plays of the Loki that Lee talks about in the video. The three pictures that I'll be using to illustrate these three plays are all courtesy of this article from RavensInsider.com (and a big thanks to Luft Krigare for tipping me off to said article). 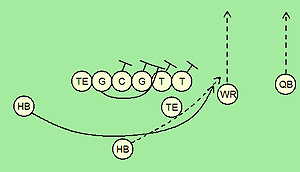 This play is the one that Lee refers to as "Steeler," which is a sweep play that's run out of the Loki formation. This is pretty much the base formation for this particular offense. Now, the first thing you'll notice is that the line is unbalanced. To the weak side (left side, in this case), we have an eligible tight end and a guard next to the center. On the other side, we have the other guard and both of our offensive tackles, with the quarterback out wide and covering the tackle on the strong side of the line. Split farthest out to the left, we have the "wing back" that was played by the aforementioned Felix Jones in the video, and by Ricky Williams in the Miami version of the Wildcat. We have a wide receiver slot right, an H-back or TE on the strong side behind the two tackles, and one of our Loki "quarterbacks" behind center to take the snap.

Now, I'm not sure if this would be the exact way that our OL would line up in the Loki formation, and there are some variations that can be run off of this, but when you hear someone talk about the "Wildcat," this is the formation they're talking about. Not only is this the basic formation for this particular offensive set, but "Steeler" could sort of be considered the base play for it because, as we'll see here shortly, the other two offensive plays that we're going to look at work off of what this play does to the defensive pursuit. Here's what it looks like on an NFL field, as demonstrated by the Miami Dolphins.

I know a lot of people will immediately think of Percy Harvin when they see this play, and rightfully so. Harvin's speed could make him incredibly dangerous on this particular play. But, man. . .tell me you wouldn't like to see a certain #28 coming across as the wing back in this formation and hauling it around the edge. I feel sorry for the extra guy that would be left on the outside to face him. Almost, anyway. 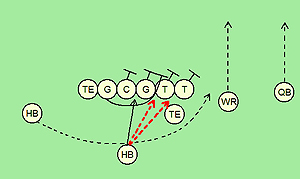 This is the play that's referred to as "Power." The formation remains the same, and as Lee says in the video, the objective is to take advantage of having "a whole lotta beef" on the strong side of the formation. Nothing fancy about this one. . .the "quarterback" takes the snap, fakes the "Steeler" play around the strong side of the formation, and then slams it up into the middle. The hope is that the misdirection of the fake could clear out the middle a little bit, but even if it doesn't, you should have a mismatch more often than not on the inside. As Lee points out, this play can go into pretty much any gap on the strong side of the line. In the diagram to the left there, the black arrow is where the play is supposed to go, in-between the center and the strong side guard. However, it can go between the guard and the tackle, between the both tackles, or even to the outside if the back thinks that he can get the edge.

If Chester Taylor is going to be one of our Loki quarterbacks, this strikes me as the sort of play he could specialize in. He's pretty good at making his reads behind the line of scrimmage, and he's tough enough to bring down where he could get the tough yards in this situation that this play seems to be designed to get. 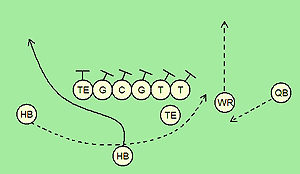 Now, THIS is the play where I think Percy Harvin (and, to a lesser extent, Darius Reynaud) could raise a significant amount of hell. This is the play that's termed as either "Counter" or "70 Weak." The formation is still the same, and we still have the wing back coming across the formation from the weak side. Now, after having seen "Steeler" or "Power" a few times, the fake to the back coming across the formation should thoroughly leave the defense confused as to what's going on next. All of the flow moves to the strong side. . .at which point the "quarterback" takes a counter-step, and cuts back in the opposite direction.

Somebody with the type of speed and quickness that Percy Harvin possesses could make some real hay on this one, I think. As you can see in this particular video, one misstep against Percy Harvin is generally all it takes.

Yes, indeed, folks. . .if Brad Childress is serious about using the Loki formation, it could definitely add an element of surprise to the Minnesota offense, and I think that it would be incredibly effective. Heck, with a rushing offense as good as Minnesota's, these three plays by themselves would probably be enough, but there are variations that can be made off of these plays as well. The Dolphins have thrown out of this formation as well. . .in the aforementioned Patriots game, Ronnie Brown scored four TDs via the "Wildcat": three on the ground and one coming on a touchdown pass he threw to TE Anthony Fasano (he also scored a TD in the more "conventional" way for a running back). You can see the highlights of that Patriots/Dolphins game at NFL.com if you're interested.

I, quite frankly, am happy as heck to see that this offense might actually be ready to take a step to another level. The Loki formation, in my opinion, could play a huge part in helping them do just that. Now. . .let's hope that this isn't just something we hear about in May and June that's forgotten by September. Oh, and don't panic if we don't see it in the pre-season. . .no point in tipping your hand in August, after all.

That's all for tonight, ladies and gentlemen. I'm going to kill some time before Ice Road Truckers starts up in a couple of hours or so, and then get myself some sleep after a long weekend of feeling like crap. We'll see you back here again tomorrow for more Vikings goodness.