Big Time News: Comcast to Sponsor The Daily Norseman for Remainder of 2009 Season

Share All sharing options for: Big Time News: Comcast to Sponsor The Daily Norseman for Remainder of 2009 Season 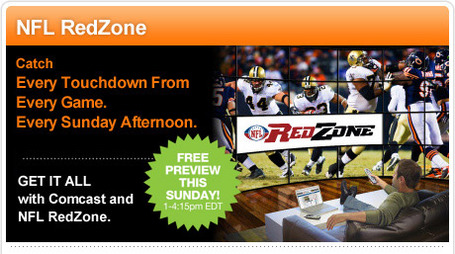 Some pretty exciting news for us here at The Daily Norseman.  The good folks at Comcast have decided to sponsor this here blog for the rest of the regular season.  They've come to The Daily Norseman and many of the other NFL blogs on the network to help them get the word out about their new Red Zone Channel.  They obviously know that the best way to get to the best and most hardcore football fans in America is to go through the SBNation family of websites, and this site is no exception.  The fact that companies like this are coming to The Daily Norseman and to SBNation in general speaks volumes about how much the site and the community have grown over the course of the past couple of years.

The concept behind the NFL Red Zone channel is pretty amazing stuff.  Whenever a team gets inside the 20-yard line, the channel will switch to that game, which will allow you to see basically every touchdown from every game.  If you don't want to shell out the money for the dish and pay for the NFL package, the Red Zone Channel was made for folks like you, particularly if you're outside of Minnesota's primary market as many of us are.

The best part?  The good folks at Comcast are going to be offering the Red Zone Channel for FREE this weekend from noon to 3:15 PM Central time for the early games.  And, as we all know, the Vikings won't be playing until Monday night, so this is a perfect opportunity for you to be able to check it out and decide if you want to pay the measly few extra dollars a month it would take to permanently add it to your package.

To find what channel the Red Zone Channel is on your Comcast cable system, go here and type in your address and it will tell you straight away.

Here are some of the other things that Comcast has going on in terms of their sports lineup:

- Recently moved all of the major sports networks to their most popular tier of service giving it to millions more people at no additional charge, and launched ESPNU.  Also offering ESPN360  to their internet customers for free.

- Comcast also has the new NFL Redzone on its Sports Entertainment Package (about $5-7)  this channel is getting a ton of buzz, and fans love it.  This weekend Comcast will offer the NFL Redzone for free to all of its 17 million digital customers.  The ³free-view² will be available this Sunday, October 4 from 1 PM to 4:15 PM EST (12 noon to 3:15 PM CST).

- We also have On Demand content from the NFL network whose game recaps of every game every week, draft profiles, player profiles, etc.  We also have this type of content for specific teams including the Eagles, Steelers, Bears, Broncos, Seahawks.

Now, I don't intend on turning into a complete shill for Comcast or anything. . .actually, this will be the only post that I intend to do that will be devoted wholly and solely to Comcast. . .I simply wanted to welcome them as a sponsor for the site and let you folks know that they'll be sponsoring the occasional post here at The Daily Norseman.