There Can Be Only One

Share All sharing options for: There Can Be Only One

The snake-bitten Superdome vs. the malaise of the Metrodome.

Bags that cover your head vs. Trades that kill a franchise dead.

Archie Manning never getting a chance vs. Fran Tarkenton just missing out on his.

And now, a battle of religious proportions to see which tortured franchise might finally break through: Voodoo witch doctors vs. Purple Jesus.

It's no secret that the fan bases of New Orleans and Minnesota have endured more than their share of heartbreak throughout the years. While the media is touting this game as the NFC's best two teams squaring off, Vikings and Saints fans both know better. We know what it really means. It's like an anorexic and a cutter both going to rehab and knowing only one is going to get better.

As a Vikings fan, we've been to the clinic a lot more than our Cajun brethren. While the Saints have reached this point only once before three years ago (last week's win over Arizona was only the ninth playoff game in New Orleans franchise history), this is the fourth time in my life that the Vikings have been here. The first three didn't go so well. Take a trip down memory lane with me, won't you?

But hey, look at the bright side! We're 2-0 all-time against the Saints in the playoffs! So what do the Vikings need to do to avoid writing the fourth chapter of this depressing story?

I'll start you off with a nice time-honored NFL cliché: we have to dominate line play on both sides of the ball. 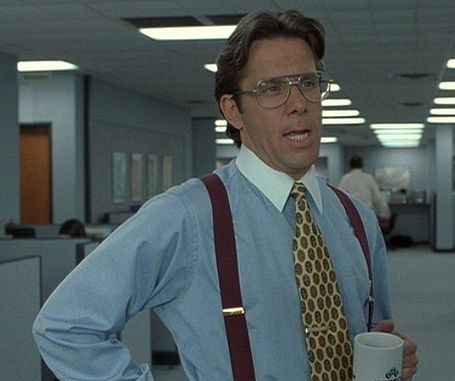 "Yeaahh hi Vikings defensive line. Great job on getting your TPS reports in on Romo last week. [In this case, TPS stands for Tackle, Pressure, and Sack.] Ahh, I'm also gonna need you to go ahead and come in on this Sunday, too. We lost a couple of people this season [E.J. Henderson, full-strength Antoine Winfield] so we're just trying to play catch-up a bit. So if you can just ahhh stop in to New Orleans and play even better this week, that'd be great. Mmmkay? Thanks. Yeaaahhhh."

If our front four can get pressure on their own like they did last week, it will be a huge step towards slowing down the Brees Express. If we're forced to blitz like we did in the Arizona game, we might as well start printing out invitations to the end zone. Drew Brees wants us to blitz. His quick release and excellent decision making will pick apart the mismatches all day if he has time to throw and/or fewer defenders in the secondary.

On the offensive side on the ball, the line obviously needs to keep Ye Olde Gunslinger upright. But more important is that we NEED to get Adrian Peterson going early and often. See how I used bold, italics, and all caps on the word "need"? That means it's really important. The Saints were 21st against the run this year and the Vikings have the best running back in the NFL--it's not like we're talking quantum physics here.

However, there is one thing about our running game I'd like to see a little more of: running AP when we spread out the formation. It seems to me that Peterson can't get going on a lot of runs because there are five defenders at the point of attack. So why not give him more space and fewer defenders to worry about? I know this isn't a revolutionary strategy by any means, but then again our coach is Brad Childress. Hopefully he can figure out a way to get our ground game back on track, because the more yards and clock we can chew up with the run, the less we have to face the best offensive attack in the NFL.

When it comes down to it, the Saints and Vikings are both great teams that have their respective imperfections. Since the teams are so evenly matched, I'm fairly certain that it will come down to one or two big plays. It could be Darren Sharper coming up with a huge interception or it could be Darren Sharper getting burned by a Brett Favre pump fake. It could be Adrian Peterson pulling out an "Ohmygodhedidntjustdothat" TD run or it could be Adrian Peterson fumbling at a crucial time. It could be Reggie Bush killing us with returns like he did last year or it could be Reggie Bush playing the role of Kim Kardashian's arm candy and not much else. It could be a well-concocted trick play from Sean Payton going for six or it could be an ill-timed trick play from Sean Payton backfiring on him. (It's happened more than once--remember that double reverse he called with the lead late in the fourth quarter against Tampa a couple years ago?)

It should be a great game to watch. I just can't believe we still have more than 48 hours until kickoff! Thankfully, interacting with Saints fans this week has been a pleasure compared to the toxicity of many of the Cowboys fans. While I've learned a lot about our opponents (as well as the definition of "gris-gris" and the fact that many natives of New Orleans sound and type like they were extras from "The Waterboy"), I'm more than ready for the game to start. Before the Dallas game I lamented on how last week was the longest week ever. It didn't hold the title for long--this week has been excruciating. To quote YouTube sensation David After Dentist, is this gonna last forever?!

Thankfully we know it won't. I just hope our season lasts a couple more weeks after Sunday.

We know that one tortured fan base will represent the NFC in the Super Bowl this year. The only question is Who Dat's going to be. And you know what? I say it's going to be us. I think the Vikings make one more of those big plays in the end.

So who's going to take on the Vikings in Super Bowl XLIV? Here's my pick:

(Does Philip Rivers scream at everything all the time? Can't you just picture him berating people during random moments of his everyday life? When he makes breakfast in the morning, does he run to his wife and yell "F*CK YEAH, THIS IS MY TOAST! I TOASTED AND BUTTERED THAT SH*T! WHO WANTS SOME?! DIDN'T THINK SO!!")

Besides, if we're going to piss off the rest of the country with two weeks of way too much Favre coverage, why don't we just throw in Peyton Manning and really piss everyone off? By the time the Super Bowl rolled around, wouldn't Manning and Favre usurp Heidi and Spencer as the two most hated people in the world? I hope we get to find out.

Final side note: Is it just me, or does Rex Ryan look like comedian Ron White's fat twin brother? Seriously, look!

Separated at birth, or just separated by girth?