Thanks to Everyone For an AMAZING Year

Share All sharing options for: Thanks to Everyone For an AMAZING Year

I know, you haven't really heard a heck of a lot from me since the game ended on Sunday night.  Everyone else got their takes up so quickly that I didn't want to prematurely obscure them with anything I had to add.  I'll have my take on the actual game tomorrow sometime, but for now I want to put something out there about the site and the incredible year we had this season.

I posted this picture just before the kickoff of the NFC Championship Game, but didn't want to call too much attention to it at the time, so as not to take away anything from the matter at hand.  But I'm going to put it up here again. 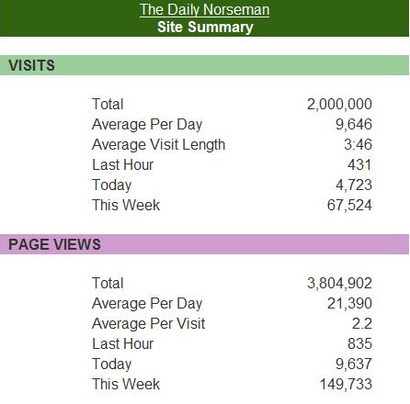 Yes, ladies and gentlemen.  Just prior to kickoff of the NFC Championship Game, this site reached the 2 million hit mark in overall traffic.  Remember way back when I put up the post about reaching the 1 million plateau?  All the way back on. . .1 July?  Of this year?  Just short of the site's three-year anniversary?

Yep. . .it took almost three years to get the first million hits in the history of the site.  It took just short of six months to reach the second million.  The level of growth that this community has experienced this season has been nothing short of incredible, and is a testament not just to the site itself, but to all of you that make up this community.  And this site is going to continue to grow and flourish and get better as the days, weeks, and months come along and we get closer to the 2010 season.  We're even looking into getting merchandise for the site up and running here before too much longer (more on that later on this week).

I have to give a huge thanks to the best damn writing staff a guy could hope to surround himself with.  Anthony and Eric. . .as well as our latest addition, MilCardFan (not sure if he wants me putting his real name out there). . .have brought a lot of great stuff this season, and have made sure that we've always had new, fresh, and relevant stuff out there for everyone to read.  We've all had plenty of times this year when "real life" has taken over, and without all of us working in concert, this site would be awfully empty at times.  As the year goes on, we might look to add even more writers to the site as well. . .after all, what's the best thing that you can add to the best Vikings' site on the internet?  More Vikings stuff, of course!

I just wanted to make sure that I got this out there before I tossed one final log on the fire that was the Vikings 2009-2010 season.  Thanks to each and every one of you that has made this site a part of their weekly Viking routine.  Or their daily Viking routine.  Or their hourly Viking routine.  (Although I might be the only person that falls under that last heading. . .I still think half of our two million hits have come from me personally.)  This site has become the kind of spot that Viking fans deserve to have on the internet, a place for discussion amongst the greatest fans in the NFL.  We'll keep the entertainment up throughout the off-season, and it will be late July again before we know it.

Thanks again, ladies and gentlemen!  Enjoy the rest of your Tuesday.