Share All sharing options for: Vikings Wave Goodbye To Moss, Apparently The 2010 Season

Why? Because the former Vikings GM who helped orchestrate the infamous Herschel Walker trade between Minnesota and Dallas no longer holds the title of Dumbest Vikings Move Ever.

Just under a month ago, the Vikings traded a third round draft pick for Randy Moss. They received the following in return: 13 receptions, 174 yards, two touchdowns, one win out of four games, one memorable press conference, zero new head coaches, and one incredibly incensed fan base thanks to one horribly failed transaction.

As nearly all of you have now heard (especially since Chris and Ted have already posted about it here), Randy Moss was released today by the Vikings. Of course, the team is pointing to his bizarre press conference last night and saying he "wasn't the type of guy they wanted". I'm not disputing that Moss can be a handful, especially when his team isn't doing well. He definitely takes plays off, but he was also the only semblance of a deep threat the Vikings had. He had one catch for eight yards on Sunday, but he commanded double teams on nearly every play. I can guarantee you that Percy Harvin wouldn't have had over 100 yards receiving without Moss' presence yesterday.

So sure, I guess you can point to Moss' attitude as a reason for parting ways. But EVERYONE ALREADY KNEW ABOUT HIS ATTITUDE! WHY TRADE FOR HIM IN THE FIRST PLACE IF YOU WERE SO EFFING CONCERNED ABOUT IT?! I hate to sound like your typical angry sports blogger, but HOLY CRAP I AM AN ANGRY SPORTS BLOGGER RIGHT NOW!

The Vikings knowingly took a gamble when they traded for Moss. It wasn't really paying off during the first month. But inexplicably cutting him after only four games was kind of like going all in during a Texas Hold 'Em hand only to fold before the river card is even dealt. This move just screams, "Well, we gave it a shot but it didn't work out. Better luck next year I guess." How are Viking fans supposed to continue to support a 2-5 team without a modicum of leadership or direction to be found? Are Jerry Jones and Zygi Wilf having some sort of competition to see who can sabotage a Super Bowl hopeful more that I don't know about? (That's the only logical reason I can come up with as to why Brad Childress and Wade Phillips are still gainfully employed.) This season has me feeling like I took more crazy pills than Mugatu in "Zoolander".

I can appreciate that the Vikings put all their eggs in the 2010 basket--they begged for Favre to return, scrambled to trade for Moss, and spent more money than all but a couple of teams in the uncapped year. They realized the window of opportunity was closing fast. Unfortunately, the one rotten egg in charge has appeared to spoil the entire basket.

It's painfully obvious that the Vikings released the wrong person today. I'd be shocked if there was one player in the Viking locker room that is able to take Brad Childress seriously now. It's impossible to take anything he says at face value--even The Boy Who Cried Wolf would call B.S. on anything that comes out of Childress' mouth these days. Yesterday's game was yet another sparkling example of how inept he is as a head coach. Today might be the best example of how inept he is as a leader.

I think most Viking fans wanted a big change after going 2-5. But I think we were all surprised that the change was throwing in the towel instead of correcting the most glaring problem.

Ugh. Right now, it's hard to think about anything other than how Jake Locker or Andrew Luck will look as a member of the Los Angeles Vikings in two years. Just another Monday after another depressing loss in Minnesota. Sounds like we're all gonna have a case of the Mondays for the foreseeable future. 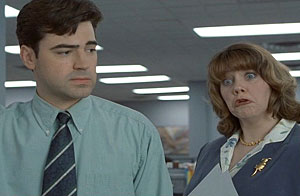