Vikings vs. Bills: Who Will "Take It Now"?

Share All sharing options for: Vikings vs. Bills: Who Will "Take It Now"?

Sounds like something that an NFL Head Coach might say to his players right before a big game, right? But Jordan Chase isn't a coach. He's not even a real person.

If you're unfamiliar with who Jordan Chase is, you aren't watching the latest season of the best show on television, "Dexter". (Now before you start screaming "I don't have Showtime or I'm still catching up with the older seasons on DVD, DON'T YOU DARE SPOIL ANYTHING ABOUT THIS SEASON!"--don't worry, I won't.)

Chase is a prototypical Tony Robbins-type motivational speaker that fires up his minions with his mantra, "Take It Now". Basically it means if you see something and desire it, that you should reach out and take it, no matter what it is. Standing idly by will not achieve your goals and in order to achieve something, you must take it.

That advice doesn't always work the best on the show, but I think it holds fairly true in the NFL. Nobody's going to just give you yards, points, or victories. You have to seize the opportunities and, well, take it.

Maybe the 4-7 Vikings and 2-9 Bills should have attended some Jordan Chase seminars before the season, because neither team has been able to "Take It Now" for most of the season.

Buffalo might be the best 2-9 team in NFL history. They've taken three opponents with a combined record of 23-10 to overtime, only to end up losing in increasingly heartbreaking fashion. The Bills had two golden opportunities to "Take It" last week against Pittsburgh but couldn't capitalize. Leodis McKelvin tripped over his own player on the opening kickoff of overtime when it looked like he was heading to the end zone. And Steve Johnson...ohhh, poor Stevie Johnson...I think we all saw what happened there. The Bills could be battling for .500 this week. Instead, they're the Chicago Cubs of the NFL--just a bunch of lovable losers.

The Vikings haven't been able to "Take It" either. Besides the embarrassment at the hands of the Packers that got Brad Childress fired, Minnesota has had a legitimate shot to win the other six games they've lost. There has been plenty of "taking" in those games--just not by the Vikes. For instance: opponents taking the ball from Brett Favre, wide receivers taking advantage of our porous secondary, and referees taking their flags out at the most inopportune times.

It's kind of comforting to know that one of these tortured fan bases will get to enjoy a victory on Sunday. But who will be able to "Take It Now" in the Metrodome tomorrow?

Both teams have strengths that can definitely exploit the weaknesses of the other. The Bills rank dead last in rush defense, by quite a large margin. The Vikings have Adrian Peterson. While AP is banged up, all indications are that he's going to play. If he can't go, Toby Gerhart should fill in admirably, much like he did last week in Washington. It doesn't take a Rhodes Scholar to figure out that the Vikings should be able to run like crazy on Buffalo.

On the flip side, these Bills can toss the rock around a bit. I'm not too concerned about Fred Jackson running the ball on the Vikes, but he could definitely do some damage catching the ball out of the backfield. Stevie Johnson did have the Drop Heard Round the World, but he's a Fantasy Waiver Wire MVP candidate for a reason. And don't forget, Ryan Fitzpatrick still has deep threat Lee Evans to throw to as well. (Allegedly. According to his fantasy numbers, I'm not certain he still exists.)

Another point of concern for the Vikings is Buffalo defensive tackle Kyle Williams. He has been absolutely wrecking people lately. He drew three holding penalties last week, and that number probably should have been higher. He could continue his reign of terror against Minnesota since they've been playing Musical Linemen for the past few games.

As Chris reported yesterday, there are a lot of Vikings players listed as questionable on the injury report. I like our chances as long as Percy Harvin, Steve Hutchinson, and Peterson are on the field and somewhere near full strength. Buffalo's playing hard every game, but the Vikings are still much more talented, especially with three of their most important players on offense. If the Vikes can keep the turnover-free football going under Leslie Frazier, they should come away with a victory and keep their bleak playoff hopes on life support for another week.

We all know the Bills are better than their 2-9 record; it's just a matter of finishing games. Let's hope they don't suddenly learn how to "Take It Now" on Sunday. 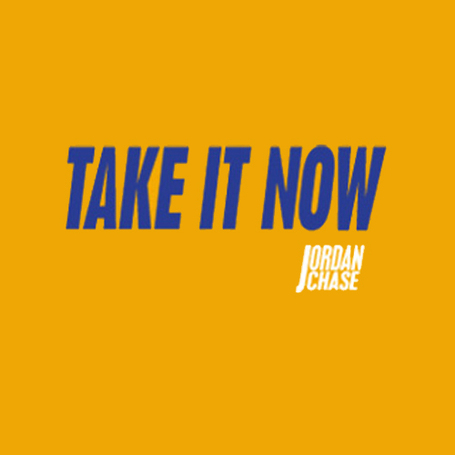 For you, fellow Dexter fans.

Here are the rest of my Week 13 NFL picks (home teams in CAPS):

EAGLES over Texans: This was my suicide pool pick as well, which brings me to 12-1 on those picks this year. (Stupid Giants in Week 10.) When the Eagles burst out to a 14-3 lead, I got a little cocky and nearly Tweet-jinxed myself. Of course Houston came back and made it a game, but their awful defense prevailed in the end.

Saints over BENGALS: Who went from looking outstanding to a hard to look at faster--Carson Palmer or Jessica Simpson?

Bears over LIONS: I was all set to go with the upset here, but then I heard that Drew Stanton is probably going to start for Detroit. Dammit.

PACKERS over 49ers: The best thing about Packers losses: you only need to watch three quarters. If they're behind going into the fourth, you know Aaron Rodgers isn't bringing them back!

TITANS over Jaguars: Only because I feel a huge game for Chris Johnson coming on after the stink bomb that offense dropped in Houston last week. It sounds like Kerry Collins should be back as well, which should mercifully put an end to the Rusty Smith experiment.

CHIEFS over Broncos: AFC West Revenge Game! By the way, since I have Dwayne Bowe in two of my fantasy leagues, I should probably send him a Christmas gift now, right?

DOLPHINS over Browns: Much like the Bears game, I was all set to pick Cleveland for the upset until I heard the two most frightening words in the NFL: Jake Delhomme.

GIANTS over Redskins: This game might actually be better than most people think. Of course, it could also set the NFL record for most turnovers in a game with how these two teams have played at times.

CHARGERS over Raiders: AFC West Revenge Game! Also, it's December. Apparently the Chargers turn into a combination of the 1985 Bears and 1972 Dolphins during this month. Yeah, I don't get it either.

Panthers over SEAHAWKS: Yeah, I picked the 1-10 team to win on the road. It was the only thing I could think of to make this game somewhat exciting. That, and posting a picture of the Sea-Gals. 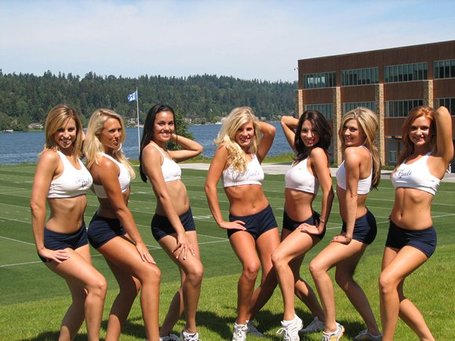 Easily the most interesting thing to watch at Qwest Field this week.

Rams over CARDINALS: At least Derek Anderson will have a Coors Light commercial to fall back on after he's out of the league in 18 months.

COLTS over Cowboys: Unless Dallas decides to dress in San Diego uniforms. Then they'd probably win.

Steelers over RAVENS: Total coin flip here. It just seems like these two teams should split their games every year.

PATRIOTS over Jets: AFC East Revenge Game! Plus, I don't want to hear Rex Ryan gush about how awesome his team is if they win.