What if the Vikings were Vikings FC?

Share All sharing options for: What if the Vikings were Vikings FC?

Hey, did you know the World Cup starts on Friday?! It's in South Africa! They used to have bad laws but now they're a good country thanks to Nelson Mandela, those political guys that formed a soccer league in prison, and of course Matt Damon's rugby team! (Editor's note: Statements may not be historically accurate.)

Of course you know about the World Cup, whether you like it or not! ESPN has been shoving Bono and the commercials with that guy from Blood Diamond down our throats for months now. I'm sure a lot of you are sick and tired of all the soccer talk getting in the way of your Vikings offseason news, but I have a confession to make.

There, I said it.

I've been playing since I was five. I played soccer in high school instead of football--and I didn't even try out to be the football team's kicker! I played soccer all four years of college and even coached for a few years after that. I still play year-round in men's leagues twice a week. I have to admit: I love a perfectly placed crossing pass from Landon Donovan to Jozy Altidore just as much as I love a perfectly placed fade route from Brett Favre to Sidney Rice. A U.S. goal in the World Cup gets me up and shouting just as loud as a Vikings touchdown in the NFC Championship.

After you're done ridiculing me in the comments section (I know you guys won't let me down there), hopefully you'll read on to see why our Beloved Purple footballers and the world's premier "footballers" have a lot more in common than you may think. It'll be fun, I promise!

Of course, I could have taken the easy way out with my NFL-integrated World Cup preview. There are 32 teams in the World Cup and there are 32 teams in the NFL. "Hey, I know, let's compare each World Cup team to an NFL team to educate the non-soccer savvy!" Well, that has already been done. A lot. I'm pretty sure most of you can figure out "Algeria sucks, just like the Rams!" on your own. Besides, who cares about the other 31 NFL teams right now? This is a Minnesota blog dammit! If I'm going to commit blasphemy and talk soccer, I might as well mix in some good old-fashioned homerism right?

So instead, I'll compare how some of the Vikings' elite players share traits with some of soccer's best:

E.J. Henderson and Didier Drogba: Both guys can cover all sorts of ground on the field. They are the main cogs of their respective units, and without them on the field both the Vikings D and the Ivory Coast are much worse off. Unfortunately, Henderson and Drogba have a knack for breaking bones at the most inopportune times. Want proof? Here's Henderson's leg in the Arizona game that kept him out of the last part of the 2009 season and Drogba's arm that might keep him out of the World Cup.

Antoine Winfield and Iker Casillas: They ooze experience--the Vikings DB is heading into his 12th season and the Spanish goalkeeper is entering his third World Cup. Neither is necessarily flashy, but you wouldn't want to depend on anyone else on their squads to come up with a big stop when you need it. Winfield is the anchor of an otherwise iffy secondary, and Casillas is depended on to cover Spain's defensive mistakes. If the Vikings and Spain want to make it to the promised land in their respective sports, these guys must be on top of their game.

Adrian Peterson and Lionel Messi: At first glance, this comparison makes absolutely no sense. AP is built like a brick...um, outhouse, and Messi is probably about the size Peterson was in seventh grade. But both of them are arguably the best in the world at what they do, and they are definitely the best in the world at pulling off "holy crap he did not just do that" plays in their sport. The hopes and dreams of every Viking and Argentina fan rest squarely on these two, which means AP better stop that fumbling and Messi better score a whole bunch of goals in the next month.

Brett Favre and Thierry Henry: These two were a match made in heaven--both are coming to the end of illustrious careers. Favre (at QB) and Henry (at forward) have been considered among the best at what they do for a very long time. And of course, nobody is more universally despised by fans of teams other than Minnesota and France. I'm pretty sure I don't need to cover why so many people aren't fans of the Gunslingin' Grandpa in this space. And just ask anyone from Ireland how they feel about Henry's handball goal that knocked them out of the World Cup. (Then duck, because something will be thrown at you.)

Pat Williams and Oguchi Onyewu: Three words: big ass dudes. "Phat Pat" and "Gooch" are immovable anchors in the center of their respective defenses. You better go around 'em, because you sure as hell ain't going through 'em. Only thing is, nobody's certain how much they'll play--Williams for the Vikings because of the ridiculous Starcaps case and Onyewu for the U.S. team because he's coming back from a major knee injury.

Jared Allen and Cristiano Ronaldo: Again, a silly comparison when you first look at the two. Ronaldo's a world-class whiny pretty boy while Allen's a world-class awesome redneck. But hear me out here. They're both among their sports' elite. You have to know where each is on the field at all times or you're in big, big trouble. And they both make terrible decisions involving women. Allen cut off the most amazing mullet in the world for his fiancée, while the Portugal superstar hooked up with STD factory Paris Hilton. Yeesh.

Jim Kleinsasser and Franck Ribery: These two don't play anything like each other, but holy hell could they both win an ugly contest. Just look at these two! 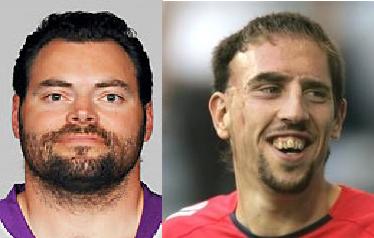 Well I hope that was a fun and maybe even somewhat educational experience for you soccer noobs out there. Even if you can't stand the World Cup, at least we'll be less than a month away from training camp when it's over!