Everyone Remain Calm. (At Least For Now.)

Share All sharing options for: Everyone Remain Calm. (At Least For Now.)

There has been a lot of national sports pundits pondering varying degrees of "What's wrong with the Minnesota Vikings?" since our Beloved Purple fell to Miami last Sunday. Even my sports writing hero Bill Simmons has started throwing dirt on the Vikings 2010 season:

I feel the same way about the Vikings that I do about Sally Draper -- just a ton of red flags early on, and it actually might play out even worse than we expect. My new prediction: Brett Favre makes an Exit Stage Right by Week 6 by pulling an Al Czervik. You could already see him laying the groundwork when he left the locker room after last week's Miami loss and milked that limp with the camera following him. He never wanted to come back. You can't convince me otherwise. Chevy Chase seemed happier filming "Caddyshack II" than Favre seems filming his Vikings sequel. This will not end well.

(This was a great example of why I like Simmons: I know he's not for everyone, but I linked to the exact same video as he did on the same day regarding the same subject. The only difference was that I was joking around about it and Simmons really thinks it'll happen. I swear I didn't read his article until today. You have to believe me!)

I understand why people are worried about Minnesota, and especially Favre: the Vikings are 0-2 and haven't looked good in the process. But I'm here to tell you that we shouldn't jump the Vikings' ship just yet.

First, let's address Favre. Everyone is freaking out about how poorly he's played so far. But let's take a look at what he did the first two games of 2009 compared to this year:

He has just as many completions and over 100 more yards more than he had at this point last year. The two big differences? The interceptions (obviously) and the opponents. Last year Minnesota played the Browns and the Lions to start the year--not exactly murderer's row. This year, they played the defending Super Bowl champions and a Dolphins team that looks above average at the very least. If Favre's play continues to suffer against the porous Detroit secondary, then I think he might be on his way down. But I wouldn't count him out just yet.

Now let's take a look at a couple fun facts:

Fun Fact #1: The Vikings last lost to the Lions in the Metrodome on December 14, 1997. Minnesota has won the last 12 meetings in Minnesota.
Fun Fact #2: Brett Favre is 18-0 at home against the Detroit Lions.

In internet geek terms, the Vikings and Favre have PWNED the Lions at home for a very long time. History is most definitely on Minnesota's side on Sunday.

But of course, you don't play games based on the past. As my Daily Norseman colleague Skol Girl pointed out earlier in the week, these Lions aren't the automatic W they used to be. Here are a couple not-so-fun facts about Detroit:

Not-so-fun Fact #1: Lions rookie RB Jahvid Best has 268 yards from scrimmage and five touchdowns in his first two NFL games.
Not-so-fun fact #2: The Lions are tied for the league lead with ten sacks. Eight of those sacks have come from their defensive line.

This just in: Jahvid Best is good. Like, real good. The easiest way to slow Best down would be for the Vikings to get a big early lead and force Detroit to pass more. If not, the Vikings' ability to stop the run is still the biggest strength of the defense. But from what I've seen of Best so far, he could make a couple big plays off screens and stretch plays.

The front line is definitely one of the ways that the Lions could do some damage against the Vikings. Favre's ankle appears to be just fine, but nobody's going to confuse him with Michael Vick in the pocket. Minnesota has used more max protect packages to keep Favre upright, but I think that's part of the reason why the passing game has been off. Bryant McKinnie and Phil Loadholt need to play well--they've been inconsistent through the first two games. If the offensive line can handle Ndamukong Suh and the vastly improved Detroit pass rush without too much help, the Vikings should be able to put up quite a few points. If not, it might be another long day for #4.

But the bottom line is that the Vikings are still a better team than Detroit. They should be able to tame the Lions. I think the Vikes will make us all nervous, but they'll find enough offense and big plays to keep the historic winning streaks over the Lions alive. If not? Well then, it might be bye-bye to 2010 heading into next week's bye, and you're officially allowed to break this bad boy out:

But NOT before then.

Now it's time to for my Week 3 NFL picks. Hopefully I'll do better than my coin flip 8-8 showing in Week 2 (home team in ALL CAPS):

49ers over CHIEFS: The Vikings are a desperate 0-2 team picked to do much better that needs a win. Same with the Niners. This will be a theme in my picks this week.

PATRIOTS over Bills: My suicide pool pick of Week 3--still alive after picking the Packers last week. Guess who Green Bay played? Yep, Buffalo. This will probably be a theme in my suicide pool picks this year.

Titans over GIANTS: I have absolutely no idea about these two teams after two weeks. Seriously. Are they playoff teams? Are they mediocre? Are they not very good? I'll take Tennessee here only because I picked up their defense this week in one of my fantasy leagues.

RAVENS over Browns: I picked Cleveland to win each of the first two weeks. My blogging privileges should be revoked on that premise alone. I learned my lesson, I promise.

Cowboys over TEXANS: Another "desperate 0-2 team that needs a win" pick.

Steelers over BUCCANEERS: A text I sent to my old roommate (a big Bucs fan) last Sunday: "The Vikings are 0-2 and the Bucs are 2-0. I hate this Bizarro World." I think the world returns to a little more normalcy this week.

Bengals over PANTHERS: Wow, Matt Moore. If you go to a Charlotte bar and tell a girl that you play quarterback for the Panthers, do they just pour drinks on your head in disgust now?

Eagles over JAGUARS: Weird week in Philly--Andy Reid picks QBs like my wife picks outfits. "This one...no, this one!" And by the way: seriously, Philadelphia Daily News?! Top Dog?! 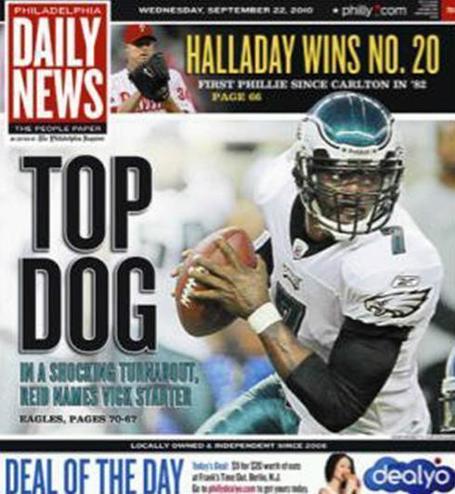 Redskins over RAMS: The Skins have had all sorts of trouble against the Rams in recent years, but I just couldn't bring myself to pick a team that has won six of its last 50 games.

Colts over BRONCOS: Knowshon Moreno is out, which means Correll Buckhalter is next in line for the "Broncos RB that blows up out of nowhere and causes every fantasy owner to frantically try to pick him up" period. Good times. But Indy still wins.

CARDINALS over Raiders: Arizona sucked hard last week, but I just can't in good conscience pick the Flying Gradkowskis on the road.

Chargers over SEAHAWKS: Ryan Mathews might be out this week, which means Mike Tolbert will be doing his best Buckhalter impression in fantasy leagues.

Jets over DOLPHINS: First one to score a touchdown wins?

Packers over BEARS: Only because I can't pick "tie while both teams lose 14 starters to injury."