Of course, this isn't exactly an award that you'd like to win by any stretch of the imagination.

Yes, with Chris Cook's arrest on Saturday morning on two counts of domestic assault, the Minnesota Vikings now have more arrests than any team in the National Football League since 2000. 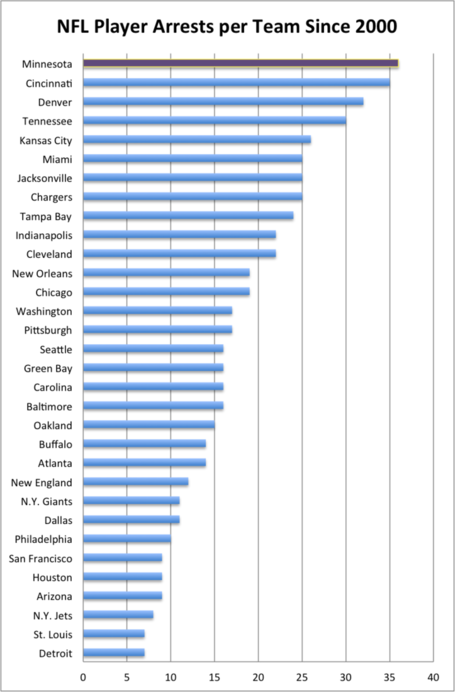 (Picture taken from The Fantasy Football Source. Their FaceBook page is here. Not sure if they have a Twitter account, but if they do, I'll link it here. They got their information from The Deets, which you can find on Twitter right here.)

So what, exactly, can this be blamed on? It isn't coaching, since this team has gone through four different head coaches during this time (Dennis Green, Mike Tice, Brad Childress, and now Leslie Frazier).

Are the Vikings taking too many "character risks" with players they draft or sign in free agency? Should they be looking for choir boys with slightly less talent?

Seriously, I'm at a loss. . .Minneapolis isn't a crappy place to be (despite what some others might tell you). I simply don't get what the deal is. If any of you good people have an idea, please feel free to express it in the comments.