Week 12 Preview: Is There Anything To Be Thankful For?

Share All sharing options for: Week 12 Preview: Is There Anything To Be Thankful For?

After watching yet another painful Vikings loss last week in person at the Metrodome, I should probably spend this space opining about the woes of my favorite team. The other three hated rivals from the NFC North are deep in a playoff battle while we're stuck wondering about which hole we'll fill first in the 2012 draft. I should waste 1500 words ranting and raving about the un-watchable present and uncertain future of the Vikings.

But you know what? I'm going to be the bigger man today. No, really--it's the day after Thanksgiving. I'm a much bigger man today. Turkey, mashed potatoes, corn, stuffing, gravy, and pie will do that to a guy. Rather than break down how the Falcons will most likely stomp out a hapless, most-likely-Adrian-Petersonless Vikings squad in Atlanta on Sunday, I'll use a tried and true Thanksgiving weekend column gimmick and tell you what I'm thankful for this holiday season.

First and foremost, I'm thankful for the Daily Norseman community. Seriously, I'm not sure how I could have made it through this season if I didn't have an outlet to publicly vent about the Vikings' shortcomings. It's great to have a ton of like-minded fans to commiserate with during this historically bad season. I truly appreciate everyone that contributes to this site in one way or another. (Even the handful of evil trolls that feel the need to visit our wonderful site. You guys make it fun for Chris, Ted, and I to wield the ban hammer!)

I'm also thankful that we're not 100% sure that Adrian Peterson will be out for Sunday's game. After watching him get carted off the field against Oakland, I couldn't help but expect the worst. I honestly hope AP doesn't rush back for a game that means literally nothing to Minnesota, but the fact that he might have to get chained to the bench in order to keep him out is good news.

I'm thankful that Jared Allen is a bionic, relentless, sack machine no matter what the scoreboard says. If the other ten guys on defense had half the motor and desire of Allen, our team would be in much better shape.

I'm thankful that Christian Ponder is quick on his feet, both in the literal and physical sense. He still has a lot to learn, but I love how he can improvise and buy time with his legs in order to avoid getting killed by our porous offensive line. Speaking of which...

I'm thankful that just about everyone agrees what the Vikings' three main problem areas are: offensive line, wide receiver, and defensive backfield. When there's this much consensus about what needs to be addressed in the draft, it makes me feel a little less nervous about Minnesota's front office screwing it up next April.

I'm thankful that Toby Gerhart will get a chance to prove he was worth a second round pick. It's hard to display your talents when you're second in line behind the best running back in the league, so hopefully Gerhart will seize the opportunity. (Lorenzo Booker, that goes for you too. Prove that you're more than just a kickoff return specialist.)

But thankfully I'm realistic, and I'm making the Falcons my Survivor Pool pick of the week. (9-2 on the year so far after the 49ers came through for me last week.)

Here are the rest of my Week 12 NFL picks, after thankfully finally having a good week for once (home team in ALL CAPS):

Packers over LIONS
COWBOYS over Dolphins
RAVENS over 49ers
I'm thankful I Tweeted these picks out on Thursday morning so you'll know I wasn't lying about actually getting picks correct for once.

JETS over Bills: I'm thankful that the Bills are such a dumpster fire that it justifies me picking Mark Sanchez not to screw up enough to lose.

BENGALS over Browns: I'm thankful that it's easy to pick against a team that doesn't have a single player that should start on any self-respecting fantasy team right now.

TITANS over Buccaneers: I'm thankful that I could just flip a coin and not care either way about this game. And since I have nothing else to say about this one, I'm thankful for the Gratuitous Picture of the Week! 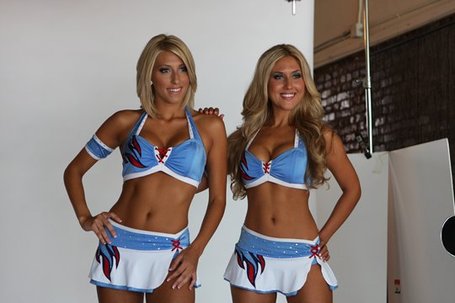 Panthers over COLTS: I'm thankful that I can pick the worst defense in the NFL to win because the Colts couldn't score three touchdowns against a JV high school team at this point.

RAMS over Cardinals: I'm thankful that I won't have to watch a single second of this game.

Texans over JAGUARS: I'm thankful that if I get this pick wrong I can bring out all the old Matt Leinart jokes again.

RAIDERS over Bears: I'm thankful that we won't be the only NFC North team to lose to the Raiders thanks to Jay Cutler's thumb.

SEAHAWKS over Redskins: I'm thankful that I picked up Marshawn Lynch in both fantasy leagues I'm in. And I'm still thankful Tarvaris Jackson isn't our quarterback even though his team has twice as many wins as ours.

CHARGERS over Broncos: I'm thankful that the law of averages has to bring Tim Tebow back to Earth for at least one week against a desperate opponent. Right? RIGHT?!

Patriots over EAGLES: I'm thankful that Philadelphia is just too beat up to compete, which means they have to lose and finally remove themselves from the playoff picture. Right? RIGHT?!

Steelers over CHIEFS: I'm glad that the hapless Chiefs swooped in and picked up Kyle Orton, because I didn't want to see the Return of Neck Beard in Chicago.

SAINTS over Giants: I'm thankful that this column gimmick is finally over. I bet you are too.