Week 16 Preview: The Twelve Days (And Counting) Of Losing

Share All sharing options for: Week 16 Preview: The Twelve Days (And Counting) Of Losing

Tomorrow's game against the Redskins means absolutely nothing except where each team might draft next year. It's really hard to be motivated to break down a matchup between an embarrassment and a debacle. (I'll let you choose which is which.) Both teams have endured six-game losing streaks this year, which pretty much guarantees that your season is kaput (although the Vikings have the chance to extend it to eight if they keep playing the way they have).

At least the Redskins have shown flashes of being a legitimate NFL team in the past month--their upset of the Giants last week was impressive. The Fightin' Rexes are favored to win, and they should win. Sure, I guess Washington could lay an egg on Saturday. Maybe Adrian Peterson finally gets enough touches to do some damage and runs roughshod through the Redskins defense all day. Maybe Rex Grossman pulls a...well, Rex Grossman and throws four picks to the interception-allergic Vikings secondary. Maybe Bill Musgrave coaches to his offense's few strengths instead of calling cutesy play-action hand-offs to our starting quarterback.

But maybe if you've followed this Minnesota team in 2011 (and I'm guessing you have if you're still reading a preview for a meaningless game), you know that it will probably end up poorly for the Vikings. It might happen in a completely unexpected and heartbreaking manner, but rest assured that the result will probably be the same--another tally in the L column.

Oh man. I apologize. I don't mean to shout "Bah humbug" like this during the holiday season. So what if our team is 2-12? Why can't we look past our team's laundry list of problems and sing a festive Vikings-themed Christmas carol instead?

Well, we can. Join us after the jump for a very special twist on a holiday classic.

Since the Vikings have 12 losses so far this year, I think there is no better way to introduce some holiday cheer into an otherwise awful season by singing about each and every one of those painful losses. To the tune of "The Twelve Days Of Christmas", I'll go through a statistic from each loss starting with the most recent. Ladies and gentlemen, I present to you the world premiere of "The Twelve Days Of Losing":

On the twelfth day of losing, my Vikings gave to me:

10 TEBOW PASSES (for 202 yards, which is all the completions it took for yet another Tim Tebow fourth quarter comeback)

6 POINTS-A-LOSING (The Vikings actually kept it close in their first loss to the Pack, creating lots of what definitely turned out to be false hope)

FIIIIIIIVE KLUWE PUUUUUUUUNTS! (One of which was run back for a 98-yard touchdown by Devin Hester as the Bears blew us out on national TV)

AND A DONOVAN MCNABB T-D! (He actually threw one against San Diego in his ominous debut as a Viking, despite throwing for only 39 yards)

I hope you enjoyed that festive, nostalgic trip down memory lane as much as I did. Happy holidays to you and yours. And remember to enjoy your friends and family when you're sitting with them tomorrow wondering how you can cheer for a team that plays this poorly.

And now for the rest of my Week 16 picks (home teams in ALL CAPS):

Broncos over BILLS: Tebowmania is infiltrating the playoffs. Just accept it now and prepare to not hear a single word about the other three games on Wild Card weekend.

BENGALS over Cardinals: Speaking of which--ALL JOHN SKELTON DOES IS WIN! IT MIGHT NOT BE PRETTY, BUT HE JUST FINDS A WAY! HE'S 4-1 AS A STARTER!!! Let's hope that Cincy takes care of business at home to shut up all those media folks clamoring about the young upstart quarterback.

RAVENS over Browns: I don't think I've posted the Cleveland video in my picks yet this year, so here it is. FUN TIMES IN CLEVELAND AGAIN!

TITANS over Jaguars: Every time I see Christian Ponder make a mistake, I remind myself that at least he isn't Blaine Gabbert.

Raiders over CHIEFS: Too many people jumping on the KC bandwagon. I think they'll be spent after their season-defining win over Green Bay.

STEELERS over Rams: Screw the ankle--Ben Roethlisberger could beat the Rams with an amputated leg.

PATRIOTS over Dolphins: I did a fantasy basketball draft last week with a bunch of friends that know just as little about the NBA as I do. I really wish I would have picked Kris Humphries. If Reggie Bush can have a renaissance like this after getting out from under the Kardashian spell, Humphries should average 25 and 10 this season.

Giants over JETS: Every time we think the Giants have turned it around, they lose. Every time people count the Giants out, they win. This week, it's the latter. (Plus the Jets kind of suck.)

PANTHERS over Buccaneers: My Survivor Pool pick of the week, now 12-3 on the season. Cam Newton is going to go nuts on the porous Tampa defense. (If I say that enough, hopefully it will jinx him into playing poorly against me in one of my fantasy football championships this week.)

Chargers over LIONS: Detroit will still make the playoffs, but it's the Lions--they can't have nice things without struggling for them first.

Eagles over COWBOYS: Because apparently nobody wants to win the NFC East. Since I have nothing else to say, here's your Gratuitous Picture of the Week! 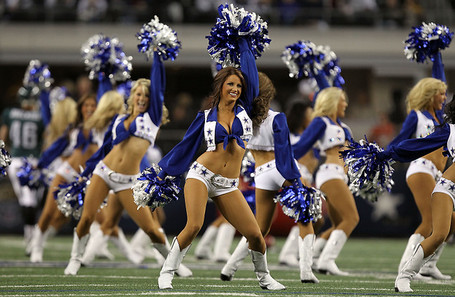 49ers over SEAHAWKS: The Niners defense has made me a believer. I'm benching the scorching-hot Marshawn Lynch in favor of C.J. Spiller in one of my fantasy championships because they have allowed zero touchdowns on the ground this year. You read that right. Not a one. No matter how mediocre their offense is, that D will make them a tough out in the playoffs.

PACKERS over Bears: It took Chicago four games to realize Caleb Hanie was terrible; too bad they only have two games to come to the same conclusion about Josh McCown.

SAINTS over Falcons: I know that most Vikings fans aren't wild about the Saints or their fans, but I hope you'll forgive me for rooting for Drew Brees on Monday night. He could win me hundreds of dollars with his performance on Monday night. Plus, let's face it--the Saints probably have the best chance to take down that team from Wisconsin in the playoffs.