Contrary to popular belief, Sunday's game in the Metrodome will be played between two teams with 11 players on each side of the football.

But you know damn well that 99% of the talk for this game is about just one person. So let's just get it out of the way now.

This probably isn't the best time or place to admit it, but I'll do it anway: I'm a Tim Tebow fan.

Yes, I genuinely appreciate the quarterback that will line up across from the Minnesota Vikings tomorrow afternoon. It usually isn't pretty, but you don't just fluke into 5-1 in the NFL. His herky-jerky release is better timed with a sundial instead of a stopwatch, yet the ball seems to land in Eric Decker's hands at the most crucial times. His throws can follow the flight pattern of an inebriated duck, yet he has thrown only one pick this year. NFL defenses are supposed to be too fast for the option offense, yet Tebow has 455 yards rushing, mostly through variations of the option.

I also appreciate Tebow as a person. His religious message gets mocked (granted, most of the mocking is lighthearted and not meant with any disrespect), yet he remains incredibly comfortable in his own skin. He's different. He knows he's different. He embraces the fact that he's different. Even if his message was something I disagreed with (don't worry, I'm well aware that an NFL blog is the last place in the world I would get preachy), I'd still respect him for having such strong convictions.

But I think my favorite thing about Tebow is simply how he drives everyone nuts.

I can sum up just about everyone's exasperated opinion of Tebow with the help of one simple internet meme: 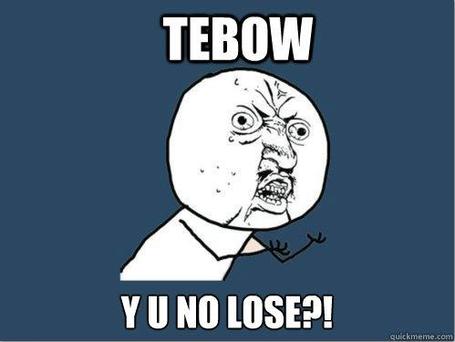 If you've never seen this online meme before, I'd like to welcome you to the internet.

The most compelling aspect of Tebowmania is how much it defies conventional logic. There's no easy way to describe what's happening in Denver right now and that's why everyone is talking about it.

But if you do try to describe it, you better recognize one very important point: it isn't all about Tebow. Not by a long shot. In my opinion, Denver's success is mostly attributed to the guys on the other side of the ball, starting with rookie Von Miller.

Miller's status is officially Questionable for Sunday thanks to thumb surgery, but his talent isn't. The second pick of last April's draft has more than lived up to his billing. It sounds like if he plays he'll wear a club over his injured thumb. Fitting, because clubbing is exactly what he can do to Minnesota's offensive line.

It doesn't stop with Miller. Elvis Dumervil missed all of 2010 and the Broncos were one of the worst defenses in the NFL. He's back with a vengeance this year and now the Broncos are one of the toughest teams in the league to score on. That's not a coincidence. Throw in an experienced secondary with the likes of Champ Bailey and it's fairly easy to conclude that points will be tough to come by for Minnesota's banged up offense.

That is, if our banged up offense actually sees the ball. One of the most underrated aspects of the Tebow-led read option offense is how their run-heavy attack can control the clock. When you have Tebow and Willis McGahee averaging an NFL-best 159.7 rushing yards per game it can drastically shorten the game.

In summation, Denver has a stout defense, a grind-it-out offense, and the most inexplicable escape artist the league has ever seen. Meanwhile, the Vikings will be without their best player. Minnesota's receiving corps and secondary might look more like city league flag football teams than NFL units. Surely the Vikings can't defend their home turf against the resurgent Broncos, right?

Sure, conventional logic points to an easy Denver win. But then why the hell are the Vikings still 1.5 point favorites? Hmm...

Maybe it makes more sense than you think. Even though the Vikings' starting secondary consists of...you know what? It's not not even worth naming the starters. Either way, Tebow's inconsistent passing is probably the best-case scenario for them. The Denver offense isn't built to take advantage of our defense's biggest weakness. Believe it or not, the Vikings' defense is still very good against the run. I don't see them completely shutting the Broncos down, but I think our front seven still has the speed and discipline to keep Denver from moving the ball in big chunks on the ground.

The Metrodome hasn't provided the results we want this year, but it's still very clear that the Vikings are a better team at home. If the Vikes don't make critical mistakes, if they the avoid stupid penalties, and the second-stringers play as balls-out as they should to prove they belong, they could easily steal one from the Broncos. Besides, Tebow is due to fall short just once in the fourth quarter, isn't he? ISN'T HE?!?!

Once again, I'm going to the game on Sunday, so I won't be around for the game threads. (Although I'll try to Tweet my thoughts during the game and maybe even some tailgating pictures before the game--shameless "follow me on Twitter" plug here!) And dammit, I'm sick of watching my team lose live. So I'm picking the upset-that-technically-isn't-an-upset.

May His Tebowness have mercy on me for forsaking Him. (C'mon, I had to make one joke.)

Here are the rest of my Week 13 NFL picks (home teams in ALL CAPS):

Eagles over SEAHAWKS: Yep, good start for my picks this week. I Tweeted it Thursday night just to prove I know nothing. But I'm almost glad I got this one wrong just for the sake of schadenfreude. MORE LIKE NIGHTMARE TEAM, AMIRIGHT??

Falcons over TEXANS: Team #1 that desperately needs a quarterback yet wouldn't touch Donovan McNabb. I think Houston is still going to win the AFC South, but T.J. Yates isn't beating the Falcons.

BEARS over Chiefs: Team #2 that desperately needs a quarterback yet wouldn't touch Donovan McNabb. My Survivor Pool pick of the week, now 10-2 after picking the Falcons last week. I'm predicting the Return of Neckbeard to Chicago in this one--too bad it's going to be in garbage time.

STEELERS over Bengals: Not even Dalton will be able to get Cincy out of this Road House alive. Wait, why are you groaning and rolling your eyes?

PATRIOTS over Colts: C'mon. And since I have nothing else to say, here's Skol Girl and my wife's least favorite weekly segment, your Gratuitous Picture of the Week! 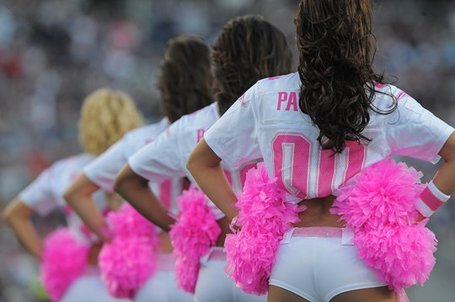 They have a better chance of scoring on the Pats than the Colts do.

Raiders over DOLPHINS: I know the Dolphins are a very tough out these days, but Oakland's MVPs will carry them to victory. Of course, I'm talking about Sebastian Janikowski and Shane Lechler.

Jets over REDSKINS: Why do I have a feeling that this game will be decided by an awfully thrown pick-six?

BUCCANEERS over Panthers: I can definitely see Carolina beating up on the struggling Bucs, but I'm hanging out with my old roommate (huge Tampa fan) this afternoon to watch our alma mater NDSU in the FCS football playoffs. (GO BISON!) I just want to cheer him up.

Ravens over BROWNS: If Cleveland wins this game, I will rename the Ravens the Baltimore Trap Games. They can't have another letdown after a big win, can they?

Packers over GIANTS: I know everyone's been saying how the G-Men are the undefeated team conquerors, but I'm now openly rooting for the 2011 Packers to complete their transformation into the 2007 Patriots. They're basically there already: undefeated season, quarterback playing out of his mind, questionable defense...if it leads to Green Bay pissing away the Super Bowl like the Pats did, I'm all for it.

49ERS over Rams: Can they just end this game as soon as San Fran gets to 13 points? Because there's no way St. Louis is scoring more than that.

SAINTS over Lions: New Orleans is going to stomp Detroit. (Didn't like the play on words? So Suh me, Lions fans.)

Chargers over JAGUARS: Just like the Eagles, if it takes me picking the Chargers for them to lose every week, then so be it.