The Williams Wall Could Still Get Suspended

Share All sharing options for: The Williams Wall Could Still Get Suspended

No, not Packer fans gloating about their Super Bowl victory--although that answer is also correct.

This Williams Wall suspension story just won't die. The Minnesota Court of Appeals has denied the request of Pat Williams and Kevin Williams to get a permanent injunction against the NFL from punishing them for a failed drug test. A failed drug test that resulted from a over-the-counter weight loss supplement, StarCaps, that didn't properly list all its ingredients and was summarily pulled from stores by the FDA. A failed drug test from 2008. Nearly three years ago, yet we're still talking about it.

Here's the legalese from the folks at the Pioneer Press:

Minnesota's Drug and Alcohol Testing in the Workplace Act does not regulate bumetanide, the prescription drug found in StarCaps, the tainted weight-loss supplement the Williamses used, which means the NFL did not violate state law by trying to discipline them, the Court of Appeals ruled today.

The Williamses have played the last three seasons because Hennepin County Judge Gary Larson issued a temporary restraining [order] blocking the NFL from suspending the linemen during their lawsuit. Larson denied the Williamses' quest for a permanent injunction.

So yes, even though a court has ruled multiple times that the Williams Wall shouldn't be suspended, the Court of Appeals' decision has basically canceled that out. Hopefully the NFL will finally let this go--they sorta have issues that are exponentially more important at hand right now with the labor situation.

The funny thing about this situation is that there's a very good possibility only one half of the Wall will be in Minnesota by the time any sort of final ruling comes down; most of the speculation with the Vikings points to letting Pat finish his career elsewhere unless the price is right to re-sign him.

Ugh. Between this story, the celebration going on in Green Bay today, and the black cloud of labor strife hanging over everything, the 2011 season can't get here fast enough. It reminds me of a funny picture Skol Girl posted on her Facebook page yesterday: 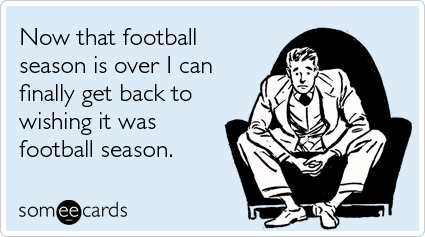