Our Field Trip To Winter Park

Share All sharing options for: Our Field Trip To Winter Park

As you all know from Chris' recent post, we had a pretty exciting meeting with the Vikings PR people on Tuesday night. Well, to be honest, any meeting with the Vikings brass is pretty darn exciting for a little ol' Vikings blog, no? But for an NFL team to proactively reach out to sites that directly connect to fans like we do here at the Daily Norseman...well that's just downright kick-ass.

While Chris and Ted called into the meeting since they live in other states (slackers), Skol Girl and I were able to attend in person and get a first-hand glimpse at where our favorite team works. Since we're just fans at heart and haven't let the "big time" get to our heads (yet), we thought we'd both share the experience of our little field trip.

That's right kids, not only are you getting an inside glimpse at what it was like to be at Winter park, you're getting the first-ever Daily Norseman collaborative post!

What? You don't care that Skol Girl and I are writing this together and you just want us to get to the cool stuff? OK fine. Being the gentleman I am, ladies first:

Recently, I took advantage of the off-season to indulge in a trip to visit my 14-month-old niece in Michigan. I take my role as favorite auntie seriously, but during the NFL season it was hard to fit road trips in between all the Minnesota Vikings drama unfolding on and off the field so frequently. With nothing more interesting than a CBA negotiation deadlock and the Vikings looking into the feasibility of Arden Hills as a potential stadium site going on, it seemed like a safe time to leave town. Imagine my surprise when I got back home to find that the Vikings’ organization had decided to tentatively embrace alternate media and, to that end, they were inviting the Daily Norseman and other blog and fan sites to Winter Park to take part in a forum discussion.

Just when I think I’m out, they pull me back in. Maestro, a little celebratory mood music please.

I couldn't believe it either. I mean, c'mon...professional teams don't just openly invite people from "alternative media" into their headquarters, especially teams from the almighty NFL. But sure enough, this Jeff Anderson fella had a real NFL email address, and he was letting us walk through Vikings HQ with nary a threat of being shot on site for trespassing. Even as I was driving to Winter Park after work, I was wondering what the catch was. (And I had plenty of time to do said wondering: I do not recommend driving from Mounds View to Eden Prairie during rush hour.) But they were there to greet us at the door, and it wasn't even Ashton Kutcher reprising Punk'd for a new season.

Since we welcomed the witty and talented Kyle (a.k.a. OrlandoVikesFan) to the Daily Norseman front page, there are now five of us on "staff", but only two of us currently living in Minnesota—Eric and me. It was up to the two* of us to represent the Daily Norseman as a legitimate and growing online community for Vikings fans.

*At the time I didn’t realize that Ted was going to call into the forum and sound ridiculously professional and brilliant. He’s a spoiler like that.

Eric and I took this responsibility seriously. We chatted for a solid 5 minutes about how we were going to sit together and exchange snide comments during the meeting and bring our cameras. I like to think it’s that kind of attention to detail that sets the Daily Norseman apart from other sites.

Tuesday evening a little before 6pm we arrived at Winter Park for the meeting. Again, I wish I could say that I was cool, calm, collected, but I was as nervous as if this was a first date, even to the point that it took me an age to figure out what to wear for the event. For as much as I knew the meeting was important to our site and to future relations between the Vikings organization and alternate media sites, I was just as excited simply to see the place where the magic happens.

Full disclosure--I changed outfits that morning too. But only because I was wearing a kelly green button-up shirt to work before I realized that color might not go over too well in the Land of Purple. Even with the experience I had during the season of interviewing Anthony Herrera and Toby Gerhart, I was still a wee bit nervous too if only because I had no idea what to expect.

The progression of the meeting itself might be kind of dull for people other than those of us gathered (about eight of us) around the table, but it boiled down to this—the Vikings organization realizes that bloggers and fan sites are becoming a bigger and bigger element in the fan experience and so they want to reach out to us and find out what they can do to help us do that voodoo that we do so well. There weren’t any promises of all-access press passes, yet, but we now have a base to grow on. And that’s positive because, until now, blog and fan sites have been treated a bit like redheaded, bastard stepchildren rather than genuine media outlets deserving of media credentials and access.

I won't go into the full details of the conference call either, but there was one very non-dull thing about it--the meeting was held in the exact room where the Vikings will hold their draft War Room in April. There were boards all around the room listing where the Vikes ranked players of every position! Unfortunately, they were very well covered, and the PR guys wouldn't let us peek even for a second. Something about "wanting to keep their jobs" and "potentially ruining the draft for the Vikings if that information got out". Whatever.

(But I still totally peeked. Get ready for Ryan Mallett folks! Just kidding, we couldn't see a thing.)

Chris already touched on this, but I wanted to clarify the kind of access the Vikings front office so graciously gave us to start:

But enough about the business of slogging it out getting information and access to aid our writing, we were in Vikings’ fan Mecca and, following the business portion of the evening’s activities, we were going to get a tour of Winter Park.

We set out, the group of us quietly trooping out of the coaches’ conference room where our meeting was held (and where the covered draft boards teased us) and down halls lined with coaches’ offices, jerseys of players like Tinglehoff and Randle and Studwell, and pictures of players past and present. I felt a like a kid on a field trip, very conscious that I had to be on my best behavior because, while being good wasn’t necessarily going to get me my precious press pass, being obnoxious would probably guarantee that the closest I would ever get to Vikings players and coaches was via my television.

One of the first things I realized about Winter Park is that being there on a regular basis might test even my stalwart affection for the color purple. It was freaking everywhere, from the handrails in the stairwells to the exercise machine upholstery, right down to the mat on the weight room floor. (EJT: Holy crap yes. I thought I was in Prince's house there was so much purple.) The second thing that hit me was that this place was not nearly as lavishly luxurious as I thought it would be, but that is probably because, for all the mystical esteem in which I might hold Winter Park, it’s a workplace and not a museum. Once you get past the lobby, it’s all about football work. Not sure what I expected, maybe something more like a Liberace/NFL/Hollywood-style mash-up featuring lots of lighted display cabinets. However, knowing that the Vikings organization is more interested in putting their money into salary-cap rather than ostentation isn’t bad either.

I was a little surprised at how simple the offices were too. But I guess a team that calls the Metrodome home should be used to underwhelming facilities, no?

I think my favorite part of the tour (unlike the guys, seeing the cheerleaders running laps was not the highlight of the tour for me) was when we got to see the team lockers. It cracked me up to realize that these players, who are worth millions, use locker cubbies that are essentially just larger, dark wood versions of what I had in kindergarten. Talking to Dan, one of the Vikings PR guys, I learned that locker assignments are basically random and based on availability more than anything else. However, Dan also said that Adrian Peterson and Brett Favre had lockers in a corner that afforded them a little more space, so it would seem things weren’t entirely random.

There were cheerleaders? I hadn't noticed. I was too busy taking in the rich history of our storied franch...ahh of course I ogled the cheer babes as they jogged by! It was my duty as a red-blooded American male!

Anyway...you guys wanna see some pictures or what? Well, here ya go! 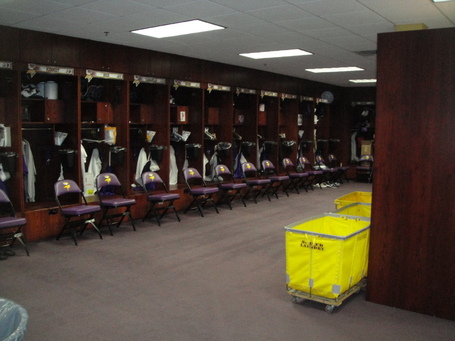 The Vikings locker room. When asked for comment about this photo, Jerry Jones replied, "My executive bathroom is bigger than this." 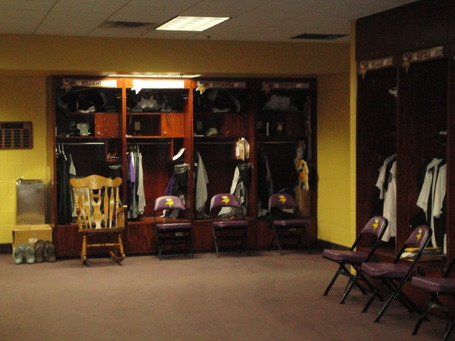 The famous rocking chair that Brett Favre received when he arrived in Minnesota currently resides with Pat Williams. I wonder who it'll get passed to next year with both players likely gone? 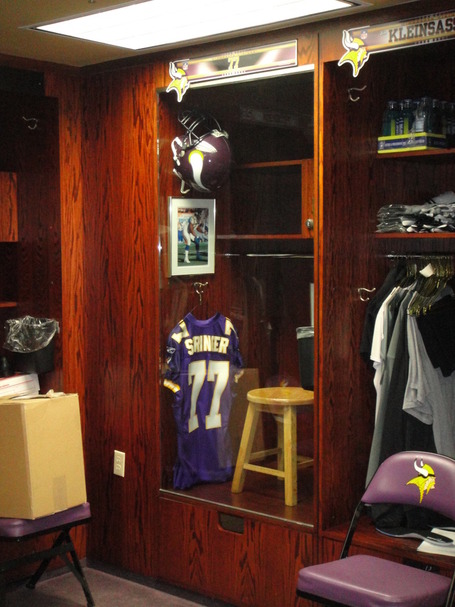 Korey Stringer's locker, still in tact and covered with glass. Very cool of the organization to keep his memory alive like that. 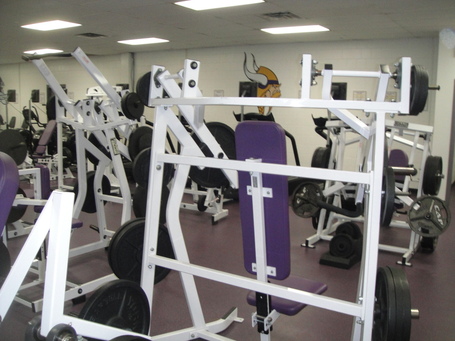 The weight room, which was easily the most purple area in our tour of purple places. We got to quickly chat with Special Teams Coordinator Mike Priefer as he was getting a workout in. 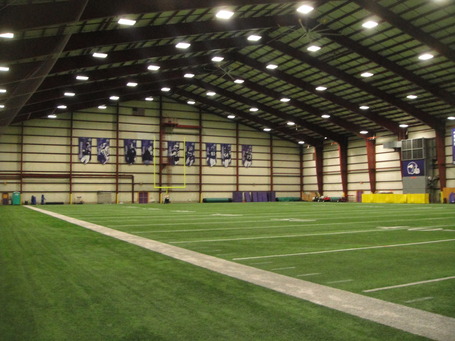 The Vikings indoor practice facility. The cheerleaders were just out of shot on the other side of the field--I thought about snapping a few pictures of them, but I thought the staring was already creepy enough. 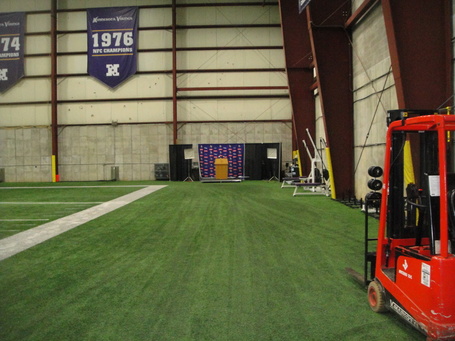 You know when you see players and coaches getting interviewed for press conferences and all you see is that purple background? Well, here's where all of that happens. Not exactly a fancy setup, is it?

Once again, we can't thank the Vikings PR team enough for giving us such a wonderful opportunity to make our site even better. The Vikings are truly pioneering this kind of access in the sports world. 2011 is going to be an exciting season for the Daily Norseman and its readers!

(Insert "if there is a season" joke here.)