An Even More Accurate System Of Grading College Quarterbacks?

Share All sharing options for: An Even More Accurate System Of Grading College Quarterbacks?

Gotta give a hat tip to the folks at our Carolina Panthers blog, Cat Scratch Reader, for finding this one.

We talked previously about the Parcells rules for drafting quarterbacks coming out of college, as well as the 26-27-60 rule for the same thing. Well, a man named R.C. Fischer has hit on a formula that has proven to be more successful in terms of finding busts and quarterbacks that have worked out long term. . .a success rate that checks in at about 70 percent.

Read on after the jump to find out more, including the name of the guy that, according to Mr. Fischer's formula, might be the best quarterback in the 2011 NFL Draft.

Just a hint on that last one. . .nobody is going to guess who that person is, and hopefully you're sitting down when you see the name.

Mr. Fischer's formula is based on the physical attributes and college careers of six elite NFL quarterbacks. . .Peyton Manning, Tom Brady, Philip Rivers, Drew Brees, Ben Roethlisberger, and Aaron Rodgers. He then examined what those quarterbacks had in common, and used that as the baseline by which to measure college quarterbacks by. He found a few common factors, as follows directly from his site:

KEY MATCHUPS – the first thing I do is throw out ridiculous games (which typically leads to ridiculous results) or in other words, throw out games/stats against horrible teams on their schedule. We look at only logical games (to not be subjective on that, we just look at games against teams with winning records), which reduces the sample of a season to somewhere between 6-10 games for any QB. We only look at games played in their final year, not the entire body of work.

WEIGHTED MATCHUPS – playing big games on the road, playing top teams (and/or defenses) in the college ranks within their season, that’s worth looking at harder. I use strength of opponent for judging an individual games value for statistically rating a QB. A matchup against a Top-10 team is worth a lot more "weight" than their matchup against a 6-6 barely qualified for a Bowl Game matchup.

PEFORMANCE PER ATTEMPT – A 300-yard passing game in 30 pass attempts, is that not similar to a 200-yard passing game in 20 attempts?…or more to the point a 400-yard game in 40 attempts? It's all still 10 yards per pass attempt? For that matter 2 passing TDs in 20 Pass Attempts is the essentially the same performance as 3 passing TDs in 30 Pass Attempts. Colt Brennan and Graham Harrell should not have an advantage over Tom Brady because they throw 40+ times a game and compile bigger stats. We look at Passing yards, Passing TDs and INTs through the lens of the number of completions and attempts...not game compilations. Quality, not quantity.

PHYSICAL CHARACTERISTICS – Height, Hand-size, arm length are some items we look at. Speed plays no factor. Do any of the elite NFL QBs of today exude any big speed? Mobility is not a characteristic of most/all elite QB (please no Michael Vick yet, we’ll get to that).

WONDERLIC/IQ – an unavoidable and a key data point we have access to on basic IQ and problem solving. There is a definite correlation to low Wonderlic scores and QB disappointment.

Now, I know that a lot of folks aren't into mathematical mumbo jumbo and so forth. . .but I'm damn sure not going to argue with a success rate like that. 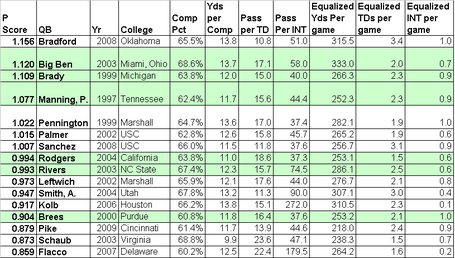 As you can see, the .850 line pretty much shows who the good quarterbacks from the last few drafts have been. The four that are questionable at this point?

-Byron Leftwich, who was a pretty decent quarterback who couldn't stay healthy early in his career
-Alex Smith, who got jerked around a lot in San Francisco
-Kevin Kolb, who may or may not fall under that heading (not enough data)
-Tony Pike(!?), who hasn't seen any NFL playing time

Other than that, the rest of those guys have been pretty good quarterbacks.

Thus far, Mr. Fischer has run four of this year's top quarterback prospects through these metrics, and here's what he's come up with thus far:

Blaine Gabbert - Score of .559, which would put him right between Brady Quinn and John David Booty on the chart.

Ryan Mallett - Score of .738, which would put him right in between Ryan Leaf and Matt Ryan (could there be a bigger contrast there?)

And then there's the guy that, if these metrics are to be believed, might be the best quarterback in the draft class of 2011. Not Cam Newton. . .not Colin Kaepernick. . .not Christian Ponder. . .remember, I said you should probably be sitting down for this. . .

By Mr. Fischer's metrics, Stanzi clocks in at a 1.012. That gives him a higher score than Mark Sanchez, Aaron Rodgers, Philip Rivers, Drew Brees, Matt Schaub, and Joe Flacco. Stanzi had a pretty good senior year at Iowa. . .64.1% completion rate, 3,004 yards, and an outstanding TD-to-INT ratio of 25/6. So far, everything I've heard about Stanzi tabs him as a third or fourth round prospect.

If Mr. Fischer's metrics are as accurate as they appear to be, the Vikings would be well-served to grab him a whole lot sooner than that.