Share All sharing options for: The Part Of The Story Where Ted Goes All 'Get Off My Lawn' Regarding The Stadium Bill

One of my favorite movies is Gran Torino, starring Clint Eastwood. In one scene, there is a lot of commotion going on in the front yard of the house next door which spills over into Eastwood's yard, and Eastwood, in a fit of anger, grabs his M-1 rifle, points it in the direction of the rabble rousers, and famously declares:

I've gotten to that point with the Vikings and their effort, if you want to call it that, to get a new stadium and stay in Minnesota. It's a rant, and it's after the jump. But please, before we get all serious, enjoy my light hearted and amateurish attempt at photocropping. Yes, I know it's terrible, but you get the idea. 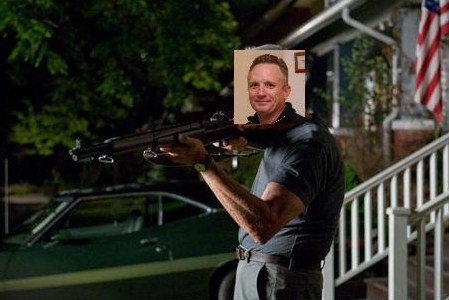 You damn Vikings...GET OFF MY LAWN!!

The more I look at the details, I can only come to one conclusion: This is a terrible, terrible plan, and it has been rolled out in the exact same way that other failed Vikings stadium ventures have been in past legislative sessions.

If the definition of insanity really is doing the same thing over and over hoping for a different result, then the Vikings stadium efforts are definitively insane. Some highlights...or lowlights:

The bill has been introduced late in the legislative session, meaning there might not even be enough time to get it through the required committees needed to make it to the floor for a vote in both chambers.

There has been no site finalized, which I would think, in the grand scheme of things, would be pretty freaking important. See, where you want to put the stadium determines who said government partner is going to be, since the state has ruled out general fund money. Will the local government be open to some sort of sales tax? WIll they demand or waive a voter referendum? How much are they able to contribute, and how will the revenue be raised? Yes, what was introduced by Legislators Lanning and Rosen has nebulous theories on a Vikings lottery, a Racino option, and some other ideas on how to raise revenue, but there is nothing definitive or concrete--just like the other stadium roll outs.

With regards to potential sites for a new stadium, I really think that the Vikings are once again playing both ends against the middle. Owner Zygi WIlf has almost lusted for a downtown location, and really has no intention of going to Arden Hills unless that is his only option, and they run the risk of alienating them just like they alienated Anoka County a few years back. Had Wilf just kept negotiating with Blaine and Anoka County, I think the Vikings would be moving into a new stadium within a year or two.

There is no longer any time left to flirt with Minneapolis; that longboat has sailed.

You know, the Vikings have done a good job advocating in the press that they need a new stadium, and were given a gift when the Metrodome roof collapsed, and what did they do? They half-assed yet another bill that seems doomed to fail, because they don't have their ducks in a row. Again. I've always felt that at the 11th hour, the state would get something done and get a bill passed, because I thought the Vikings were motivated to get something done. This latest effort has shown me they are not, but they talk a good game. I am very disheartened, because I'm beginning to think the Vikings have arrogantly taken the 'we're the Vikings, build us a stadium' stance, and I think they're playing coy with the politicians, and are banking on them carrying the water.

And the politicians will have to carry the water to get the bill through the Legislature, but the Vikings have to fill the pail with water...which they aren't doing. They have nothing but a bill that says, essentially, 'please build a stadium for the Vikings. We're not sure where its going, we're not sure how it's going to be financed, but just okay a plan. We'll get the details figured out later. Kthxby.' There is no way that this bill will pass as is, and if the Vikes try to bum rush a location and finance plan in at the last minute, it's going to go nowhere fast.

I really, really believe that the Vikings will think that they can wait until the last minute and cobble together whatever plan they come up with because the Legislature will be desperate to pass a bill to get them to stay, and that just isn't the case. There is no overwhelming support for the Vikings in the Legislature, anyone who reads the papers or the Internet can see that. For the Vikings to get a new stadium, they need to come in loaded for bear with a plan that absolutely blows the socks off the Senate and the House, and even then it would still be a tough slog to get that bill passed, considering the economic times we live in.

The Vikings have done the exact opposite of that; they have walked into the Legislature like Joey Tribbiani from Friends, cocked the eyebrow and said how YOU doin'?

Yeah, not so well, thanks for asking.

Sorry to rant, but the Vikings HAVE to know...HAVE TO KNOW...that this is their last chance to get a stadium. It's too late to in the game to be looking for a local government partner and a location. This thing should have been ready to be submitted the first week of the session, and it should be through the committees and awaiting final passage, or at least knee deep in committee hearings.

In comparison to the Vikings effort, when the Minnesota Twins approached the Legislature about a new stadium, they did their homework, and were even lauded by stadium opponents for having an impressive presentation. The Twins had a location, a cost estimate of land and infrastructure improvements, a blueprint from an architect (HOK) that was going to build the stadium along with a cost estimate of the facility, a local government partner (Hennepin County) that had already agreed to levy a sales tax measure at great political cost, and support from the governor.

And the Twins bill still only passed by one or two votes in each chamber.