Just got back from the press conference that head coach Leslie Frazier and GM Rick Spielman.  My impression is that they LOVE this kid and that they know something no one else does.  Some info after the jump: 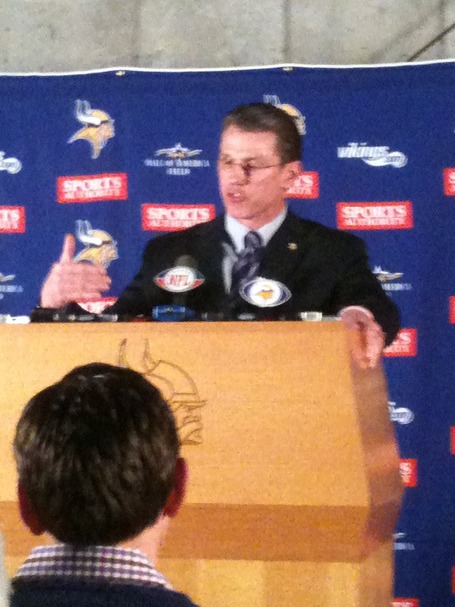 Rick Spielman addressing the media immediately after the Christian Ponder selection.  Don't bitch about picture quality, it was an iPhone camera.  DN's budget wouldn't allow for a photographer.  Or a, you know, actual camera.

The reaction from the fans might have been mixed, but there was no doubt that Rick Spielman and Leslie Frazier feel like they got their guy.  First things first.  Spielman was asked about moving back and grabbing Ponder later in the first round, but there were two issues with that.  The first was that with the way the draft was unfolding, the Vikings felt that if they moved back Ponder would not have been around when they were on the clock.  Secondly, and most importantly, they didn't get any offers to trade.  They had discussions with a few teams prior to today, but when the draft started they didn't receive any offers.

They feel Ponder is a great pick, and they aren't worried about injury history.  He's been checked out, and his arm is healthy.  They were impressed with him at the combine, and when they went to Florida State to scout him, they came away impressed with his leadership, his athletic ability, and his football smarts.

Coach Frazier said he was excited about the pick, and wholeheartedly endorsed it.  He's not worried about being tied to a quarterback, like Brad Childress was tied to Tarvaris Jackson, because he's confident that Ponder will be a great player.

As for the QB position, Coach Frazier said it will be an open competition, and Ponder will be in Minnesota tomorrow to pick up the playbook and get to work.  They're still not sure how much they can do, but Ponder will be here.

Neither Frazier or Spielman really addressed free agency, as there are still a lot of unknowns.

Also spoke to Christian Ponder, and he's obviously excited about being selected.  He wasn't sure that the Vikings were going to select him, but he knew they had interest, especially after they went down to visit him.  He said the offense that the Vikings will run is 'conceptually similar' to the one he ran at Florida State, so he's very comfortable with it.

As to the pressure of being a first round pick, he kinda sorta feels like he understands pressure already by being the quarterback for Florida State, but also understands that the NFL is a completely different animal.

I still have to go through the transcripts, but those are the highlights for now.  Enjoy!