First things first, and we'll comment on this a little bit more later on, but

AMERICA IS AWESOME AND BIN LADEN IS SUCKING A PIG'S PECKER IN HELL AND WASHING IT DOWN WITH A PORK MILKSHAKE WITH A BACON CHASER.  BOOYA!!

Okay, back to football.  If there's a theme for this weekend, it's 'Big Time'.  Not only are the 10 picks the Vikings made this past weekend on the verge of it, but so is DN, since we got press credentials for Thursday Night, and we've got the pictures to prove it.

But first, a music video, as is our wont on the SMR:

Like you didn't see that coming. It was going to be Peter Gabriel's 'Big Time', but world events have caused a change in our regularly scheduled programming, and I couldn't be happier about it.

We'll put a boot in your ass, it's the American Way.

SMR, after the jump.

I think it was a solid weekend for the Vikings, as they had a draft where they addressed multiple needs with quality players up and down the draft. I have no problems with anything the Vikings did in the draft, none at all.  Granted, I was an advocate of trading down and trying to recoup that third round draft pick they lost in the Randy Moss trade, but if there are no trading partners, like GM Rick Spielman asserted during his press conference on Thursday, then there's really no option but to take who you feel is best for your team at #12.

Christian Ponder, QB:  I know there is some angst among fans who feel Ponder was a reach at 12, but this is a good pick for the Vikings.  I've already discussed why, as has every other writer here at DN, so I won't beat this dead horse anymore--much.  But just let me say this, and then I'll quit, I promise.  The NFL is a quarterback league, and the Vikings are woefully trailing in the NFC North Arms Race.  You're not going to win a championship with just a good quarterback, but you're going to lose one without a good one.  Unless you're the 2000 Baltimore Ravens.  As much as I hate to admit it, the Vikings aren't even going to win the division as long as they're trotting out Jim McMahon Warren Moon Randall Cunningham Jeff George the noodle armed version of Brad Johnson Brooks Bollinger Kelly Holcomb a 41 year old Brett Favre (insert name of any 30-something QB here)Tarvaris Jackson.

There, I'm done saying my peace on Christian Ponder.

Kyle Rudolph, TE:  I was pleasantly surprised with this pick, because the Vikings went with the best player available strategery with the draft, and Rudolph was the best player available, and will provide a great target for a developing Ponder.  Obviously, this means Jim Kleinsasser's days as a Minnesota Viking are coming to a close, and my soul will die just a little bit when Jimmy K has retired, but nothing lasts forever.  Kyle Rudolph reminds me of Joe Senser, a big target that can get a lot of yards over the middle.  I'm looking forward to hearing 'Ponder..rolling right has a target...throws...touchdown, Kyle Rudolph!' for about a decade or so.

Christian Ballard, DL:  I was driving home Saturday when I got a text that the Vikings had drafted Christian Ballard in the fourth round, and I was very pleasantly surprised.  The SB blog that covers everything Iowa, Black Heart Gold Pants, did a nice write up on Ballard before the draft, and they think he can be a solid contributor for a long time as a Viking.  That's good enough for me.

Ross Homan, LB:  Woot woot, a Buckeye!!  Sixth round?  Wow.  I'm kind of surprised that Homan lasted that long, but good for the Vikings.  He's not the fastest guy, he's not a guy that jumps out when watching him, he doesn't have a lot of WOW moments (except for the late first half pick against Oregon in the Rose Bowl--SUCK IT DUCKS FANS), but he's just an all-around smart football player.  He made all the defensive calls for the Buckeyes, and was one of the more consistent players on a very good defense.  Short term he's an immediate contributor on special teams, and long term I can see him taking the place of Ben Leber.  Or taking the place of the guy who takes the place of Ben Leber.

There are no junk bonds this week.  A bunch of kids who have dreamed of playing football in the NFL got a call from a team and will have an opportunity to fulfill what they have worked very hard for.  I hope they all make it.  And a group of American warriors risked life and limb to bring to justice the biggest bastard in my lifetime.  I hope they all make it home safe.  God Bless fellas, and may you never have to buy yourself another beer.  PaveLow leads.

Buy:  Sid Hartman's Old School Ways:  So let me set the stage.  I get to the Sid Hartman Media Center about 3:30 or 4:00 on Thursday, and when I walk in the Holy Trinity of Vikings beat guys (Zulgad, Scoggins, Pelissero) along with their evil corporate overlord (Kevin Seifert of ESPN--who really isn't evil, but the corporation is, so it's more of a guilt by association thing.  I really like Seifert's work a lot, and he's a really good guy) are typing away madly.  You know, working hard and doing the job of a good beat writer.  About an hour and a half later, Sid Hartman walks in, and immediately demands to change the channel on the TV in a Clint Eastwood in Grand Torino 'get off my lawn' kind of way.  Hey, when the media room is named after you, you can watch whatever the hell you want to.  When it comes time for the Spielman presser, Sid grabs his recording device, a vintage...VINTAGE...cassette recorder with a microphone straight out of 1964, and grabs a seat.  Sid Hartman mocks your modern technology, and scoffs at your Internet and Twitter.  He'll write when he's damn good and ready, and not a minute before.   I would bet that Sid used that cassette recorder the last time the Gophers were in the Rose Bowl. 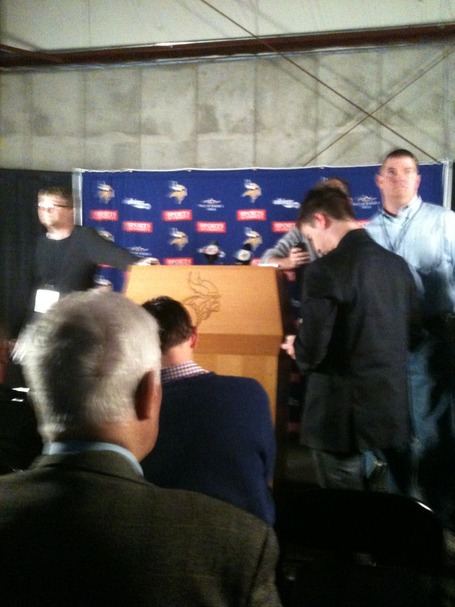 While Everyone Else Scrambles, Sid Patiently Waits.  Why? 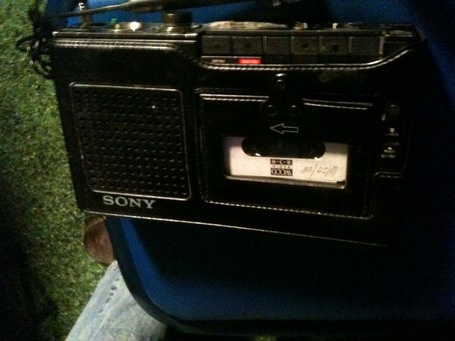 Because Sid's Tape Recorder has forgotten more about football than we''ll ever know, that's why.

Sid Hartman might be in his 80's, but he's still a badass, and it was cool just to be in the same room with those guys.

Buy:  Taking Ponder at #12:  Okay, just one more thing about Ponder.  I tire of the 'value' argument when it comes to the draft.  Yes, I know, I just used that argument when talking about Ballard and Homan, but I embrace hypocrisy when it suits me, and it suits me here.  As a team, if you feel that Christian Ponder is the guy that can lead your team effectively for the next ten years or so, and you know he won't be around in the second round, and the guys that will be available won't be as good as Ponder, then Ponder is a good value pick at 12.  Okay, NOW I'm done.

Sell:  Assuming the Defensive Guys That Were Available At 12 Were Better Options:  The NFL draft is such a crapshoot that it's impossible to say whether or not somebody should have been picked before somebody else.  Were there other guys available that might have been just as good as Christian Ponder might be?  Yep.  Were there other guys out there that could be as monumental a bust as Ponder might be?  Sure.  For me, it's just too early to get worked up about any of these guys, because they haven't even taken a snap in the NFL.  I'm satisfied with the guys the Vikings took, and I'm excited to see what kind of contributions the Class of 2011 will make in the years to come.

And I don't care about who they DIDN'T take.

Sell:  Issuing Draft Grades Less than 24 Hours After The Draft:  I could try and be more eloquent than Chris was over at SB Nation Minnesota, but I can't be.  He is spot on perfect with this piece here, so I'll just link to it and move on.  And Kyle was on the mark here, so I think you guys understand where we're coming from on the whole grading process.

Sell:  Atlanta trading 204 Draft Picks For A Guy That Has Never Played A Down In The NFL:  Quick, name a receiver that if your team traded your 1st, 2nd, and 4th round picks this year and their 1st and 4th round pick next year for you'd think, 'wow, that was a great trade!'  I'll wait.  Larry Fitzgerald?  Yeah...maybe.  And I'd be leery then.  But for a guy that's never played in the NFL?  Ree-damn-diculous.  Look, I get that it's official policy for most writers that cover the NFL to bash the Vikings for anything they do, but to call out the Vikings for 'reaching' for a QB while staying relatively silent on the dumbest trade in recent memory is insane, unless you call it a good one for Cleveland.  This was a GREAT trade for the Browns, and just a stupid move for the Falcons.  I don't even think Larry Fitz is worth 5 draft picks, and he's the best receiver in football.

So it's a kind of an abbreviated SMR, but I think we covered all the points.  I'm digging what the Vikings did, and by reading a lot of the post draft analysis, it seems that the early reviews on Ponder are more positive than negative.  I will say, Rick Spielman and Leslie Frazier are very high on this kid, and spoke highly of all their draft picks.  Granted, I'd be a bit dismayed if they came out and said "we weren't really fired up about this guy, we just sort of panicked and threw a name down on a piece of paper so we wouldn't pass on our pick like Tice did in '03", but it seems like they got good players where they needed one, with maybe the exception of safety, and got good players early, middle, and late in the draft.

Depending on what the courts say, of course.