Behold Christian Ponder In All His Madden Glory

Share All sharing options for: Behold Christian Ponder In All His Madden Glory

Usually, on draft weekend the folks at EA Sports will release pictures of the latest NFL stars. . .the recently drafted rookies. . .doing their thing in the latest incarnation of the Madden franchise. However, that did not happen this season, in all likelihood due to the legal strife with the National Football League owners and their players.

So, the folks over at Pasta Padre did the next best thing. . .they fired up their copy of the most recent Madden game, substituted the players in there, and took screen shots.

With that, here's what Vikings' first round draft choice Christian Ponder will look like. . .virtually. . .as the quarterback of the Minnesota Vikings. 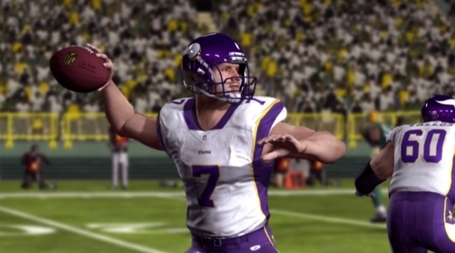 Boy, if the folks at Sony could get their sh. . .er, stuff. . .together long enough to actually get their network back online, I'd nose around and see if I couldn't find a roster that had all the new rookies on it for Madden '11. Unfortunately, nobody seems to know when that's going to happen. Still, it's kind of cool to see.