Jared Allen Is A Lot Cooler Than You Are

Share All sharing options for: Jared Allen Is A Lot Cooler Than You Are 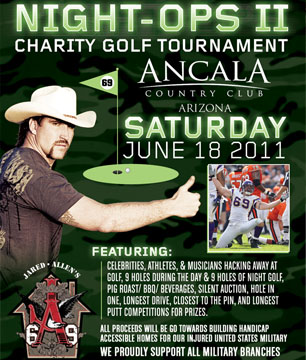 Coming up in about a week and a half at the Ancala Country Club in Arizona, Allen will be hosting his second annual "Night Ops" Golf Tournament to benefit his charity, "Jared Allen's Homes For Wounded Warriors." Homes For Wounded Warriors raises money for the purposes of either building or modifying the homes of wounded military veterans in order to make them more accessible and comfortable. Allen started the charity in 2009 after returning from his USO trip to the Middle East.

Now, if you were expecting something normal from Allen. . .well, you just haven't been paying attention. See, this isn't your average, every day, run of the mill, boring-ass golf tournament. The highlights of the Night Ops tournament include:

-Nine holes of golf in the afternoon, and nine holes of golf in the evening (things get underway at 3:30 PM local time to ensure the last part of the course gets played at night). Night golf includes glow-in-the-dark golf balls and other frivolities as well.
-At the turn? Roast pig. Yes, a barbecue between holes nine and ten. There's a silent auction at the turn as well, though I haven't gotten any real indication as to what is being auctioned off or anything.
-Marines stationed at each hole to yell at golfers as they're taking their shots. . .and make them do push-ups if they hit it poorly.
-A Slip-n-Slide on the fourteenth hole. The fourteenth hole is a Par 5. If you fail to reach the green in regulation (which, for a Par 5, means three shots), you have to take a ride on the Slip-n-Slide. Apparently this happened to former UFC Champion Chuck "The Iceman" Liddell at last year's tournament. . .although I'm guessing that had he decided he just didn't feel like doing it, nobody would have argued too much.
-Speaking of Liddell, there are celebrities all over the place. Last year's luminaries included Liddell, Jim McMahon, Jay Glazer, and Jeremy Roenick, among others. My guess is that there will be some Vikings there as well.
-Oh, and there's a $1,000,000 hole-in-one contest that kicks off at 10:30 PM.

If you're in the general vicinity of Ancala Country Club, you can get in on the golf action by going to the Homes For Wounded Warriors website (which you can get to by clicking the picture there). The fee for the tournament is $500, or $250 if you have a valid military ID. I was actually hoping to get in on things this year, but scheduling conflicts have prevented me from doing so. Oh, well. . .hopefully I'll be there for the third annual tournament in 2012. All of the proceeds, obviously, go to Homes For Wounded Warriors.

If golfing isn't your thing, through the website you can also contribute to Homes For Wounded Warriors by purchasing t-shirts, or simply making a monetary donation.

Gotta give some serious respect to Jared Allen for doing this sort of thing. I know it means a great deal to the people that it benefits, and nobody could pull this off quite like #69 can.