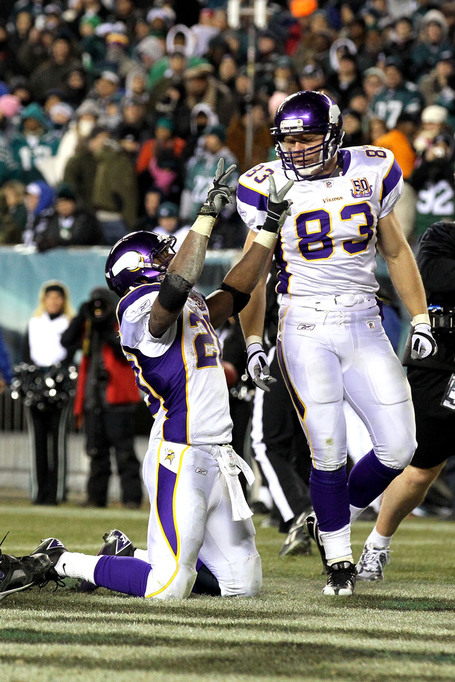 You have to love him.

Earlier today, thanks to Rob Brzezinski- normally, the ‘quiet one’ in the ToA- working his arse off, the Vikings have officially signed all of their drafted rookies, including first round QBotF Christian Ponder. This means that the Vikings can be rest assured of no holdouts during training camp. Edit- thanks to adamgvm for providing this info: Ponder's contract is 4 years, $11 mil, fully guaranteed. (Not too bad for a first round QB- thanks rookie wage scale!)

Speaking of training camp holdouts, you know how it’s practically a tradition for players in the final year of their contracts to hold out until an extension is finalized? Yeah, apparently one Mr. Adrian Peterson is not one for tradition. It’s been reported that he has no intention of holding out during training camp while his contract is renegotiated to include an extension, and HC Leslie Frazier confirmed that today.

Kinda nice to see a player not pull such a stunt. Does it have its purpose to hold out from time to time? Yes, it does. The NFL is a business and the players have obvious, vested interest in their contracts. But sometimes- it’s just stupid. It’s almost like some players hold out to just avoid having to go to training camp. If you know that the team you’re playing for is going to extend you, and especially considering the current circumstances have not allowed for teams to do that until very recently, then there seems to be considerably less cause to hold out. (*cough* Chris Johnson *cough) Again, however, Adrian Peterson has the nickname "All Day" for a reason. Blast him all you want for missing some optional OTAs last year so he could attend a parade in his honor, and blast him all you want for those ‘slavery’ comments a bit back during the lockout. When push comes to shove, the man has shown who he is, what he stands for, and what he’s made of. And that’s a man who shows up to training camp because that’s what he’s supposed to do, and because his team is relying on him. After all- he is still on contract for one more year. (And be rest assured, it will be for far longer pretty soon.)

Speaking of awesome people who don’t act like prima donnas, I now point to Christian Ponder, QBotF… and second-string (OK, for the Webb fans, assuming he beats Spiderman out for that) QB for the season opener. Some people have bemoaned the fact that Frazier has recently stated that it’s pretty much a lock that Donovan McNabb will be our starter come opening day. You know who isn’t one of those people? Christian Ponder.

Per the man himself-

"The guy deserves a starting job. He’s been in the league for a while," Ponder said of McNabb. "My mentality is to be able to go in and compete and try to get that job from him. He deserves to be the starting quarterback. Somewhere down the road I’m going to push to take that over and we’ll see."

Ataboy… those are the right things to say. I said it before when it came to Ponder organizing some workouts, and how he handled it when some vets declined to show- the man will make a great leader for the Vikings one day. Will that day be season opener? It’s looking like it won’t be. But regardless- it will come. And Ponder is willing and ready to earn it.

Our future is in good hands- be it AP’s or Ponder’s. SKOL!