Friday At Mankato--Defense Ahead Of Offense, Michael Jenkins Looks Good, And For The Last Time, Joe Webb Is A QB.

Share All sharing options for: Friday At Mankato--Defense Ahead Of Offense, Michael Jenkins Looks Good, And For The Last Time, Joe Webb Is A QB.

Hi kids!  Your humble correspondent has had quite a day.  First off, before I go any further, I want to say thanks to Jeff Anderson, Darrell Jackson, and  the Vikings Public Affairs staff.  They have gone out of their way to make sure we...and when I say we, I mean you guys, because you're why I'm doing this (well, okay, it's cool as hell to be standing and talking football with Jim Kleinsasser, but you know what I mean)  get all of our needs met.

I'm still waiting for that 6 year, $35 million dollar guaranteed contract that I asked about earlier, but I'm not complaining, really I'm not.

I came away with several impressions of the afternoon practice, and I think I got some of your questions answered.  Today, I looked hard at the QB's, the WR's, and stood in awe of Adrian Peterson.  Dude is an absolute freak, and if today was any indication, he is going to have a monster year.  Just a man among boys at times out there, and there are a lot of men on the defense; Peterson is just unreal.

Let's talk about quarterbacks, because that's where a lot of the questions lie with the Vikings.  Not going to talk a lot about McNabb.  He's a veteran, he looks good, and he looks relaxed.  I think he'll be fine.  And WR Michael Jenkins is happy to be catching footballs from him. 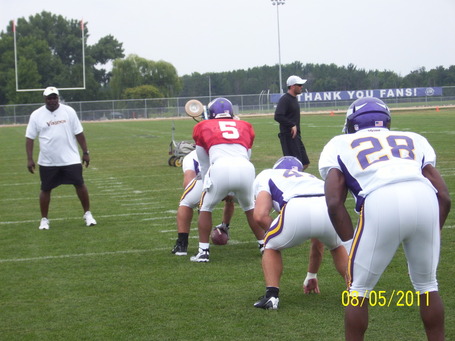 1st team backfield during afternoon warm ups.  Yeah, I was that close.

"(He throws a) great ball.  He always puts it in a position where either you or no one can catch it, and that's all you can ask for is an opportunity to go get it when it's thrown to you."

Christian Ponder.  I had the privilege to cover the Vikings at training camp in 2006 for a now defunct website, and as many of you know, that was the first year of Brad Childress' tenure as head coach.  It was also Tarvaris Jackson's, and the difference between the two seems vast.  And I'm not talking about on the field.  I mean, I am, because I think Ponder is going to be pretty good, but I want to focus on the other stuff. 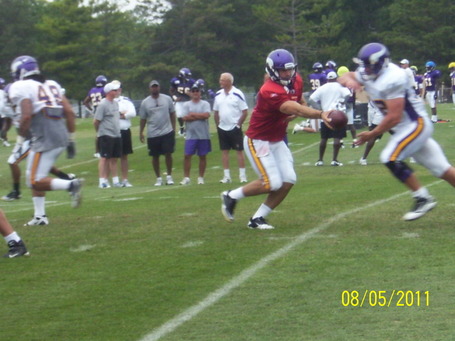 In 2006, Jackson seemed uncomfortable with the spotlight and attention that was thrust upon him as the almost dreaded Quarterback Of The Future.  I don't know if that was made worse by the serious tone of the camp that Brad Childress set, but it was there, and Jackson struggled the whole camp.  Mistakes seemed to bother him, and he just never looked or played comfortably.

I say that to mention the difference between the two.  Ponder, even when he makes a mistake, doesn't give off the body language of a guy that's got a lack of confidence, or is uncomfortable in his role; whatever that 'it' factor is a quarterback needs to be successful, he has it.  Now, that 'it' factor doesn't mean he's going to be great, but it does give him a leg up on guys that don't have that inner confidence.  And it doesn't come off as cocky, but more of a belief in himself.  I think the Vikes have a good one with this guy.

Joe Webb:  After watching today, Joe Webb isn't going to be moved to wide receiver.  Just stop it with that talk; it ain't happening.  I don't think the Vikings were seriously considering it, because Webb looks, feels, and plays like a quarterback.  And he actually had the highlight of the day, with a little assist from Adrian Peterson:

Just put the Joe Webb to WR wish/fantasy/delusion to rest, okay?  Not happening

Webb is another guy that gives off that 'it' factor, and although I don't see the Vikes putting him wide, I do envision putting in a Wildcat package for him.  He's a great athlete, and they need to figure out how to get him on the field.

But not as a wide receiver.

Speaking of wide receivers, it looks like the Vikings are going with Percy Harvin, Jenkins, and Bernard Berrian as the top three guys right now.  If I had to handicap it right now, the other two guys that are going to make the roster are Greg Camarillo and Jaymar Johnson.  Jenkins had a very good day today, making several nice catches.  He's a big guy, and although he's new to the team, he's not new to the offensive scheme, and sees himself as a guy that can do a little bit of everything.  When asked if he saw himself as an outside guy or a slot guy, he said:

"A little bit of everywhere.  In this offense, with the receiver position we can all rotate around, and make plays down the field.  I'm excited to be a part of that."

And the Vikings were doing that all afternoon.  There was no set formation where guys were consistently lined up at one position, to include Harvin.  And although Jenkins doesn't feel that the delay in practicing hurt him, there's still a lot to do.

"We're still heavy in the playbook studying, and for me, coming from Atlanta, this is an offense I'm familiar with."

All that said, the defense is still ahead of the offense.  New LT Charlie Johnson was pretty much owned by Jared Allen, as was rookie Demarcus Love.  Two points of view on that, though.  One could be that Allen is going to rip it up this year, and he's going to be hard for anyone to stop, or the offensive line is going to be a big concern.

I will say, as the team got later in to the practice, Johnson seemed to hold his own on the first team offense, and I will say this:  if the offensive line can gel, the Vikings are going to put some points on the board.  Adrian Peterson is just a monster, and I like what I've seen from the receivers so far.

It was a whirlwind day, and I'll have posts about Kleinsasser and the defensive backs up in the morning, but we'll give you one more video before we check out.  Lorenzo Booker made a nice field reversal in the goal line offense: