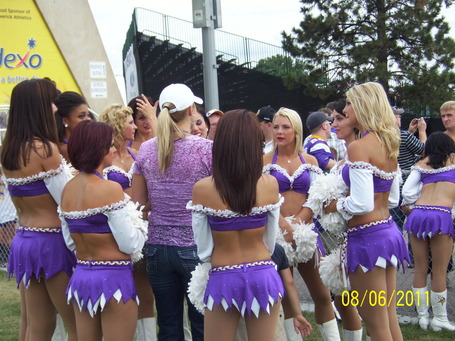 And football was played, too

Just got back from the Saturday night open practice, and it was one part county fair, one part Friday Night Lights High School Football, and one part NFL.  Blakeslee stadium holds approximately 8,000, and it was packed.  Jam packed.  Over 9,000 football starved Viking fanatics packed Blakeslee to watch the beloved Purple and Gold.

Memo to Governor Dayton, Speaker Zellers, and Senate Majority Leader Koch:  That's 9,000 voters who want to see a new stadium.  And they are a small sampling.  Get the damn bill passed, okay?  All right, enough of that.

First video:  Get a load of the crowd!

The team came through the gates to a very nice round of applause, and started out with special teams drills.  Ryan Longwell nailed 6 in a row from varying distance, and you get the feeling he's just dialed in already.  When they went to kickoff return, Percy Harvin wowed the crowd on his first return, taking it to the house.  Coach Frazier has talked about what a great leadership role Harvin has developed, and Harvin has been migraine free for over 6 months.  He has looked very good in camp, and took the second one to the house as well:

Marvel in the awesomeness of Percy Harvin

The rest of the night, after the jump, with tons of video.

When the Vikes went to a full 11 on 11, the offense struggled.  It looks like the offensive line will be, from left to right:  Charlie Johnson, Hutch, Sully, Chris DeGeare, and Phil Loadholt.  I think part of the strugggles can be attributed to learning a new system pretty much on the fly, and part of that is that I really like how the defensive line is playing.  Jared Allen is having a phenomenal camp, and the depth on the defensive line looks surprisingly good so far.  Everson Griffen looked good, as did Brian Robison and Christian Ballard.

One guy who looks like he is going to have a freak of a year is Adrian Peterson.  Whether he's motivated to get a new contract or not, he looks like he's in mid-season form.  Why yes, yes I do have a video of AP:

Simply the best, better than all the rest...#22 is Simeon Castille, by the way

I'm not too concerned with the stats on the night, because it really doesn't matter if Donovan McNabb went 1-6 or 11 for 11; he's going to be the starter, barring injury.  The key to the offense is going to be the play of the offensive line, and to date, it's been lacking.  I've noticed a little improvement from yesterday, and Charlie Johnson seems to be incrementally better, but there's a long way to go.  If the line can give McNabb time, he'll make plays.  One guy that has impressed me is TE Kyle Rudolph.  He's big, catches everything thrown at him, and he's real athletic for his size.  This two play sequence shows Rudolph catching a ball in the flat and turning upfield, and he's a lot faster than I thought.  The second play is me bailing at the end because I thought Bernard Berrian was going to run me over.

Rudolph has impressed in camp so far.  My camera work, not so much

It also looks like Toby Gerhart is going to be used a lot more than he was in his rookie year.  He's looked okay, but when you come in after Adrian Peterson, it's hard to look as redonkulous as AP does.  Add to that the offensive line getting schooled by the d-line early on, and you don't make a lot of highlight plays.  But here, Gerhart does make a nice catch and turns it upfield.  Oh, and note Cedric Griffin matching up on Berrian, he looks pretty good for a guy nine months removed from ACL surgery.  A healthy Griff will go a long way to shoring up what was a porous secondary:

So, where do the Vikings stand one week into camp?  At quarterback, it's Donovan McNabb and everyone else.  I've seen both Christian Ponder and Joe Webb working with the second team, and I give the edge to Webb.  Ponder is still trying to adjust to the NFL, and you can see that Webb has more experience.  That said, Ponder has that 'it' factor I talked about yesterday, and he's really an impressive kid.  His arm is a lot stronger than advertised, too.  He's a guy that's instantly likeable and someone you want to root for.

The offensive line, like I mentioned earlier, will be Charlie Johnson, Steve Hutchinson, John Sullivan, Chris DeGeare, and Phil Loadholt.  They are behind the power curve, and if they don't get it going, the Vikings quarterbacks will get killed.

At wide receiver, right now it's Harvin, Michael Jenkins, and Berrian.  If you make me choose the 4th and fifth guys, I'm going with Jaymar Johnson and Greg Camarillo.  Harvin, Jenkins, and Johnson have been the most impressive, and I can see a scenario where Johnson might move past Berrian on the depth chart if he keeps playing the way he has.  Very instinctive guy, catches everything, and has the speed to match Berrian for the deep threat the Vikings want.  I know some guys like Emmanuel Arceneaux, and when the Vikes signed Devin Aromashodu there were folks that thought it was a good signing, but I haven't them step up and make plays like Johnson and Camarillo have, so they need to put something on tape pretty quick.

On defense, it looks more and more like Erin Henderson will take the weak side LB spot that Ben Leber used to hold down.  On the line, I'm really impressed wit their play so far.  I'm not sure if it's they're playing well or the offensive line is playing poorly, but Robison, Kevin WIlliams, Remi Ayodele, and Jared Allen look to be a solid line.

In the defensive backfield, well, we'll see.  I think the cornerback position will be fine, as long as Cook and Griff are healthy.  They've both looked good in camp so far, and so has Husain Abdullah, for that matter.  It's the other safety position that concerns me, and we'll see how it plays out.

So, the Daily Norseman Party Bus is loading up and heading home tomorrow.  Hope you all enjoyed the camp coverage, and thanks to the Minnesota Vikings and the good folks at SB Nation and Samsung for footing the bill.

SKOL, and bring on Tennessee!!