The Off Season Prospectus, Which Is Like The Stock Market Report, Only Different

Share All sharing options for: The Off Season Prospectus, Which Is Like The Stock Market Report, Only Different

The worst on the field performance in Minnesota Vikings history--and that's saying something when we factor in Les Steckel--leads us towards the most unsettling off season the franchise has ever faced, for several reasons.

At least at the conclusion of the Les Steckel debacle, we were fortunate enough to have Bud Grant come back and steady the ship for a season, getting the team back to respectability, and then handing it off to Jerry Burns, all the while playing in a stadium that was just a couple of years old...and state of the art.

We have no such security blanket this time around.

There are some tumultuous changes ahead for this franchise, and we will see wholesale changes from top to bottom.

Well, we SHOULD see wholesale changes. Changes...take it away, Ziggy Stardust David Bowie:

Our Off Season Stock Market Prospectus Report, after the jump.

If any of you have stocks, 401(k)'s, IRA's, or something similar, at the end of the year you get this prospectus thing in the mail, which is like a year end report, and in it it tells you how awesome that stock was, even if it lost 67%.

This has been a challenging year to be a Vikings fan. From the stadium, to bad coaching, poor performance on the field, and injuries to key personnel, Vikings stock dropped precipitously from a Jan 2010 high.

How do we get back to that point in time, a half second before Brett Favre threw that fateful pick, when we were all sure we were going to the Super Bowl? Let's look at some key decisions that need to be made for the Vikings to turn it around and get back to the top.

1) Solve The Stadium Issue, One Way Or The Other: Mentally, I've gone to a place where I am of the belief the Vikings will relocate. Sorry to say that, but that's where I am. If something does get done, I'll be ecstatic, don't get me wrong, but there seems like there are too many hurdles to overcome with the lease expiration now upon us. This is what I ask of the Vikings: If you leave, don't drag it out. Announce it and just go. It will be better for everyone that way. It will give me time to accept the fact I will never give two hoots about the NFL again, and I can focus all my football efforts on college ball.

2) Re-structure The Front Office: There needs to be one guy that is in charge of football operations. Period. There's no doubt that the current 'Triangle of Authority' has made some good moves--generally solid first round draft picks, a few gems in later rounds, and solid free agent acquisitions. But there have been some mistakes as well, and those seem to overshadow the good--bad to horrid draft picks from the second round on, questionable moves at the QB position, and the Randy Moss fiasco. I have to believe that if there had been a GM running the ship, the Vikings wouldn't have either pursued Favre and traded for Sage Rosenfels in 2009, and they wouldn't have traded Moss only to turn around and release him one month later.

If owner Zygi Wilf decides to keep Rick Spielman and make him the bona fide GM, fine. If he wants to bring in somebody else to be the GM, that's fine as well...but there needs to be one guy that speaks for the team for football moves. That's not to say that the coaching staff doesn't have input, but the old saying of 'if you have two QB's, you don't have any' very much applies to the GM position--if you have two (or three), then you don't have any. The VIkings need one.

3) Speaking Of Quarterbacks...: Christian Ponder was drafted to be the quarterback for the Vikings for a long time, but you can't deny the effectiveness of Joe Webb. You can make an argument for or against either guy, and you can use game film to back up any one of those arguments. Both guys have looked good at times, both guys have looked bad at times. They both have one win this season, both have looked like guys that can lead the team...and both guys have looked shaky. Look, I like them both, but the Vikings are going to have to pick a guy. I know they want to give Ponder every chance to win the job, and that makes sense seeing as how they drafted him in the first round. But you can't deny Webb's athleticism or playmaking ability (when he's not in the ridiculous Webbcat).

Leslie Frazier needs to play this one down the middle. As the Vikings head into the off-season, they need to make this an open competition, and let the guy that performs the best win the job. Recent Vikings history has shown that when a guy is anointed as the starter, it doesn't go well coughTarvarisJacksoncough.

4) Speaking of Leslie Frazier...: Yes, he should be back for 2012. The last thing the Vikings need is to get into the 'fire a coach every two years' cycle, as that just leads to constant turmoil and strife. But Frazier needs to make some adjustments on the coaching staff. Yes, there have been injuries, but I think Fred Pagac needs to be replaced. The Vikings got burned by the same plays, week in and week out, and the amount of adjustments made seemed minimal.

As for Bill Musgrave, I think he deserves another year. Unlike Pagac, who has been on the staff for several years, Musgrave had no off-season to install the offense. As the season wore on, he seemed to get creative in using Percy Harvin, and by the end of the year Harvin was a legitimate run/receiving/return triple threat, and they did a good job of keeping him relatively healthy. Were there problems in not using Adrian Peterson at times? Sure, but overall, I think he deserves another shot. But for the offense and defense to be effective...

5) A Lot of Roster Turnover Is Needed: Some teams don't rebuild, they reload. Some teams are in a perpetual state of rebuilding. For many teams, it's a cyclical thing, like it has been for the Vikings since 2000. They've been to the playoffs four times since then, won three division titles, and have gone to 2 NFC Championships--but they've also posted records of 3-13, 5-11, and 6-10 (twice). On offense, as the offensive line goes, so goes the offense. A solid line makes either Webb or Ponder better, and either Toby Gerhart or Adrian Peterson a 1,000 yard back. They need another receiver to complement Percy, and a healthy Michael Jenkins will be an asset. If you told me the Vikings were going to have a brand new starting five on the line, I'd tell you that was a good start.

On defense, the secondary needs a complete rebuild. On the defensive line, there are some playmakers there besides Jared Allen and Kevin Williams. Christian Ballard has looked good at times, as has Eversen Griffen. MLB E.J Henderson will probably not be in Minnesota next year, and his leadership will be missed. The Vikings have the makings of a decent secondary, assuming they pick third and the Rams take LT Matt Kalil. Winfield will be back, with the third pick the best player on the board is LSU CB Morris Claiborne, and if Chris Cook comes back they could be in business.

Right now, I'm not smart enough to see who's available in free agency that the Vikings would have a realistic chance of getting. Wilf has no reservations to go out and get somebody if the staff says 'we need this guy', but it's also critical for the Vikings to have a home run draft. For too long, the second round and on has yielded little in terms of value and return on investment, which is a large part of the reason the Vikings find themselves with so many holes to fill today.

A few key free agent signings and a solid draft and the Vikings are well on their way to turning this thing around, but another bad draft and it will be several seasons before they make the climb back. 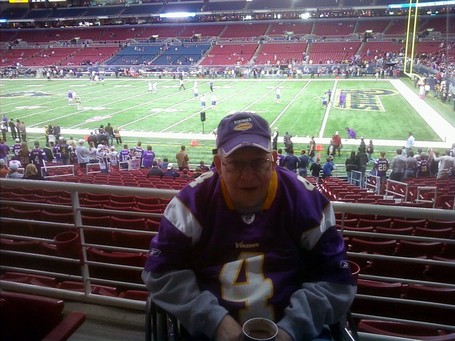 Finally, Your Don Glover Moment Of Zen: So at the conclusion of the game, my Dad and I sat in the living room for a couple minutes, and didn't really say much. So I ask him "well Dad, what do you think about next year?" He paused for a moment, looked at me, and said: