DCPurple did a hell of a lot of research for this post, from the looks of things. It deserves to be noticed. - Chris 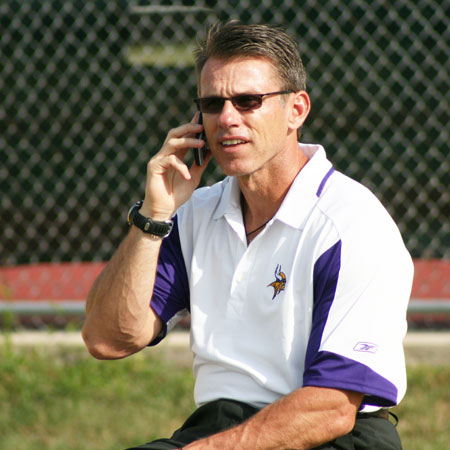 I've wanted to take a closer look at Rick Spielman's actual record with the Vikings, so I ran the figures and thought you folks might be interested in what I've found. He may not be fully responsible, but as Personnel Director, he certainly had a piece of it.

I've looked at it before but only for something specific, and as you all know, when you look for something, you're probably going to find it. This time, I'm trying to look over the whole thing. The data is primarily drawn from www.wikipedia.org, www.vikings.com, and www.nfl.com . Some of it was, frankly, a surprise to me. It's probably not 100% complete, either, there's some gaps that I can see and it doesn't cover walk-on talent at all. Spielman probably had some input even with the walk-ons, and with re-signings, and the few trades, because if nothing else, as ‘Personnel Director', he had to be involved with figuring out salary offerings, just as I expect that all of the coaches had some input or recommendations on draft choices. I understand why they tried to do this ‘by committee', but having an ultimately accountable person is critical for any organization.

I'm not going to claim that it's entirely objective. I have my opinions about the RESULTS of his choices, (and SBN ate my pretty color coded ratings, lol), and my summary is also subjective. But the data is there, you be the judge. I consider a 1st string position to be a successful pick in most cases (100% success), 2nd string is ok (50% success), 3rd string is a fail (25% success), as are any picks that are gone now (0% success).

In May of 2006, Spielman replaced Fran Foley. That means he had nothing to do with the 2006 draft, so he's not on the hook for T-Jack, Ryan Cook or Greg Blue, but neither does he get credit for Greenway, Griffin, or Edwards.

AD, Rice, and Robison are all clearly excellent picks. But I took Rice away because he's no longer a Viking and I put part of that on Spielman for, IMO, bungling the contract negotiations. Waiting until the final weeks of a contract before renegotiating it may seem like a great idea for applying leverage, until you do it with a guy who has great options elsewhere. All of the rest are utterly wasted picks, they may as well have been thrown away.

Tyrell Johnson was the Viking's first pick in 2008 because they lost their #1 in the KC trade for Jared Allen. I think that may also be why they stuck with Johnson for so long, he was a huge mistake.

Guion appears to be a solid backup. That's not a bad value for 5th round. I still think Sullivan shouldn't be more than a backup Center, but it is what it is. I'm also still disappointed in Jaymar Johnson; Cris Carter's evaluation of the young man gave me a lot of hopes for him. But here we are, 4 years later, and he still can't crack 3rd string for the Cards.

This is Spielman's best draft. Every one of them is still on the team, 1st or 2nd string. And that's kind of sad, considering what we're seeing from Load, Asher, and Sanford, despite them being starters.

Brinkley, on the other hand, will likely be a starter next year. Before his injury, he showed that he could perform at a high level.

This draft is a mixed bag. Cook was finally turning the corner and beginning to look like a real CB when he got derailed by his off the field antics. When I look at his scouting reports, it shows that he was a real reach in the second round. Also, he was projected more as a Safety, and considering all the red flags he raised with his multiple academic suspensions, it's really not surprising that he's in trouble now. I hope he can turn it around, for the Viking's sake.

DeGeare is stuck on the Practice Squad, despite how pathetic the Vikings O-line is. That tells me all I needed to know about him. Shuler was also a Practice Squad guy BUT the Vikings are now supposed to be a 2-TE set team so 4 TEs is not unreasonable. More, since K-Sauce has retired and Shanko may not return, Shuler's stock is rising.

The 2011 draft is the most difficult to judge, not just because we don't have enough time to see the guys clearly, but also because of the sheer number of injuries the team sustained which propelled some of these guys up to the front of the depth chart before their time.

I don't think Ponder was a reach at all, the man clearly has what it takes and I'm glad he's in Purple. But could the Vikings have done better? We'll be debating that for years to come.

And in the end, it comes down to this. One or two great picks that work out are to be expected, even my grandmother could have done as well by reading Mocking the Draft. We expect much better from a professional. And even more from a man in the Viking's organization.

There's no way to be sure that a player will work out, either immediately or 3 years down the road, but scouts, coaches, and GMs look for indications that give them the best shot at drawing the right conclusions. We'll never know how many Peyton Mannings were never drafted or decided to go on to be lawyers instead of quarterbacks. It almost seems like a crap shoot, except... I don't think that's entirely the case. And I'm sure that NFL scouts have access to reams of data and databases and data mining applications that would boggle our minds, when it comes down to assessing players, and they have the eyes of the coaches who bring dozens of years of talent-spotting experience to the table. Bottom line, there's not a lot of excuse for consistent poor performance at the professional level, particularly across the long-term.

Spielman does really well at selecting RBs. 100% so far. But how difficult was it to decide to take Peterson when he miraculously fell to the Vikings? How difficult was it to pick Gerhart from amongst the RBs, the man who many said should have been the Heisman winner? How hard was it to spot Kyle Rudolph, the top-rated TE in the draft? Harvin was another flyer, but there was no question about his talent. Those were all no-brainers, and those are most of his ‘star picks'.

In my mind, the only real question remaining is; how much input control did Spielman have over the past 5 years or so? How much of the fiasco that is the Viking's draft history, actually belongs on Spielman's plate, or was a gift from Chilly and others? That's the question that I think Wilf is answering now, by making Spielman the GM. At this point, it's the only way to be sure. I just wish it wasn't the Viking's who's 2012 draft will be on the craps table.

Will Rick Spielman be a successful GM for the Vikings?