Where We Gauge Interest In Another Possible Charitable Endeavor

Share All sharing options for: Where We Gauge Interest In Another Possible Charitable Endeavor

Yes, I'm totally stealing this idea from the folks at Mile High Report, our Denver Broncos site, but it seemed like such a great idea that I thought we could use it to benefit a good cause of our own.

The folks at MHR have found a site that will facilitate the creation of a "squares" game for people to participate in for Super Bowl Sunday. For the uninitiated, here's how the "squares" game works.

The game board is comprised of a 10x10 grid, which gives a total of 100 boxes. People can purchase so many boxes by putting their initials (or, in this case, your Daily Norseman user name) in the squares. So, the board would look something like this: 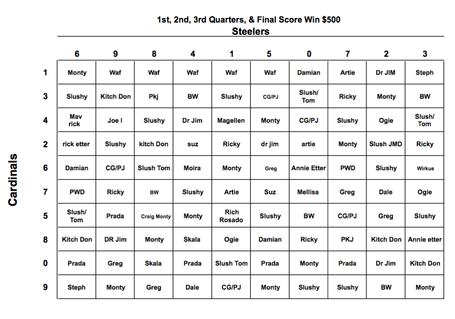 (Picture via The Monty Minute)

When the squares are filled, numbers are pulled for both sides of the grid, as you can see across the top and down the left-hand side. Those numbers coincide with the score of the game. For example, if the final score turned out to be (AFC Team) 27, (NFC Team) 21, the person that had the square that lined up at the intersection of the "7" for the AFC and the "1" for the NFC would be the winner. (That's why the numbers are pulled after the filling of the grid, so that people can't claim the more favorable digits.)

Yes, I'm guessing that a lot of folks have done a "squares" pool before. I'm just making completely sure in case we have folks out there that have not.

So, here's what I was thinking. $20 per square for 100 squares would put us at a total of $2,000. $1,000 of that would be donated to a charitable cause. In this case, I'm partial to Jared Allen's Homes for Wounded Warriors, but I suppose that's something that could be discussed.

The other $1,000 would be distributed to the members that win the pool in the following manner:

Obviously this would be done by PayPal, since mailing checks and such would be a pretty big inconvenience.