The Case For Kalil (Plus Championship Game Picks)

Share All sharing options for: The Case For Kalil (Plus Championship Game Picks)

We're now less than 100 days away from the NFL Draft. Between now and April 26, there will be roughly 80 bajillion mock drafts (exactly zero of which will be completely accurate). There will be leaks. There will be rumors. There will be tweets that lead millions of people to believe something that's totally false. (Oh hi Rob Lowe!)

But amongst all the misconception, misunderstanding, and misinformation that's sure to bombard the NFL world in the next 3+ months, I can guarantee you one thing: the Minnesota Vikings need to draft Matt Kalil with the #3 pick in the 2012 NFL Draft.

OK, fine, I'll elaborate a little. While there are plenty of intriguing players available with picking so early in the draft, I'm convinced that Kalil will be the best choice for the Vikings. He fits one of the team's biggest needs and will be able to improve many facets of the offense almost immediately. Nobody should assume Kalil will be an elite tackle right away, but the guy is NFL ready. He's 6'7", 295 pounds, and possesses amazing athleticism for a man his size. Kalil might not be the second coming of Jackie Slater, but there's a very good chance that he'll be a very good NFL lineman for a long time.

Drafting a tackle with the third pick probably won't grab many headlines; let's discuss why the Vikings should pass on some of the top future draft picks that have been hogging the spotlight lately.

Don't misunderstand my fawning over Kalil as dismissal of the other candidates. I believe that both Andrew Luck and Robert Griffin III have very promising NFL careers ahead of them. But drafting a quarterback in the first round two years in a row? A team with as many holes as the Vikings just can't do it. Even if Luck and RGIII are the second coming of John Elway and Steve Young, they wouldn't be able to accomplish much with the kind of blocking that Minnesota's offensive line provided in 2011.

Besides, are you really ready to give up on Christian Ponder after less than a dozen games? It's a ridiculous notion. The guy had no offseason to prepare and had exactly one dependable receiver to throw to. To top it all off, he had an offensive line that for the most part blocked defenders like the captain of the Costa Concordia drives cruise ships.

Many will point to Ponder's injuries and inconsistent play down the stretch as to why we should take Griffin. (Let's face it, Luck isn't gonna be there by the time the Vikings pick.) I think Ponder being banged up and playing poorly at the end of the season is exactly why we should draft Kalil. If Ponder has to spend another season running for his life, I'm afraid he'll develop what I like to call David Carr Syndrome--otherwise known as DCS.

What's DCS you ask? Just think back to David Carr's lackluster NFL career. He came into the NFL with lots of promise and was thrust into the starting role on a lousy team. He showed flashes of greatness and put up decent numbers, but for the most part he was too worried about getting sacked rather than focusing on making plays as a quarterback. (Sound like anyone you know?) His concerns were justified--he was sacked a whopping 249 times in his five-year career with the Houston Texans. By the end of his tenure there, he had become too shell-shocked to be an effective starting QB. Sure, Carr's still in the league, but his DCS will most likely keep him from being anything more than a backup.

I don't want Ponder to develop DCS, and Matt Kalil is the surest way to prevent that. I wouldn't be furious if the Vikings selected Justin Blackmon or Morris Claiborne with the third pick, especially if the Rams snatch up Kalil in front of us. They both fill a major void on the team and have tons of potential. But I believe Kalil is the closest the Vikings can come to a sure thing. After an awful 3-13 season, a sure thing sure would be nice heading into 2012.

Enough looking over three months ahead--let's take a peek at the NFL's near future with my Conference Championship picks. (Home teams in ALL CAPS.)

PATRIOTS over Ravens: I know we aren't supposed to put too much stock into how the teams played last week, but holy hell did the Ravens look pedestrian in their victory over Houston. I know Baltimore has had the Pats' number lately, but I can't pick you to outscore New England when it seems like your only two offensive plays are "stretch play to Ray Rice" and "bomb it down the sideline to Torrey Smith and hope for the best". Patriots 31, Ravens 20

49ERS over Giants: I know, I know--it's the 2007 Giants all over again. New York is peaking at the perfect time. Nobody can stop their pass rush. You can't spell "elite" without "Eli". We're destined for a Super Bowl XLII rematch. But I go exactly .500 with my picks every single playoff weekend, and I just can't pick the Ravens, so I'm going with San Francisco even though everything is pointing towards the G-Men. Of course that means by switching to the 49ers I probably guaranteed yet another .500 weekend of picks, but whatever. As long as we don't have to hear about the Harbaugh Bowl for two weeks I'll be OK. 49ers 24, Giants 20

And since SOPA tried to prevent it, let's finish it off with your Gratuitous Picture of the Week! 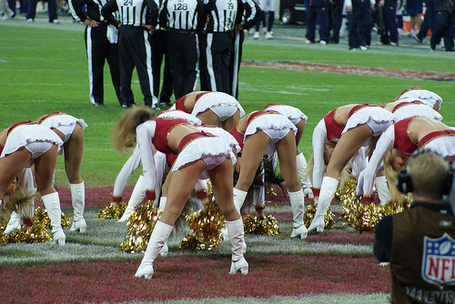