Forgive me for not getting to this story earlier--the holidays, work, travel, yadda yadda yadda. Better late than never.

Daily Norseman reader Brian S. sent me this story from Yahoo! last week. As most Vikings fans are aware of, Donovan McNabb took jersey number 5 from punter Chris Kluwe when the way-too-veteran quarterback came to town for his disastrous stint in purple. In exchange for his troubles, Kluwe asked for two favors:

Simple enough, right? McNabb sort of fulfilled his first obligation by mentioning Tripping Icarus twice before he was released. The second and obviously much more important condition? Not so much. According to the article, McNabb had yet to donate to the muscular dystrophy charity.

Not cool, Donovan. Your legacy has already been tarnished enough thanks to your brief stint with the Vikings--do you really want to make it worse by reneging on a charity?! If "C'mon Man" wasn't such a played out phrase in the NFL landscape, I'd totally say that right now. Hopefully he'll make it right in the near future.

But enough about washed-up quarterbacks--let's talk about playoff quarterbacks! After the jump I'll run down my Wildcard Playoff picks.

(As always, home team in ALL CAPS):

Bengals over TEXANS: I've gone back and forth on this pick roughly 687 times, and no matter what side I switch to, I hate my pick. Ultimately, I think Andy Dalton will make fewer mistakes than T.J. Yates. Let's just show the Gratuitous Picture of the Week before I change my mind again. Bengals 16, Texans 13 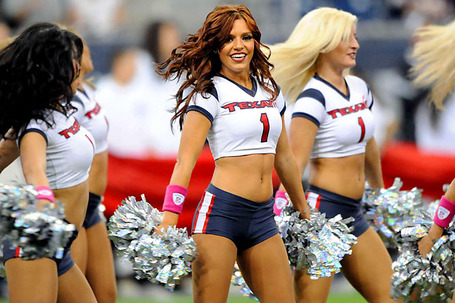 "The rookie QBs will miss some passes, so instead stare at our [CENSORED]!!"

GIANTS over Falcons: Another game I've flip-flopped on throughout the week. I think the Giants are the better team, but that's the problem--they usually don't win when they're the better team. I think the Curse of Tony Gonzalez lives on because the Falcons can't decide who they are on offense. What, you don't know about the Curse of Tony Gonzalez? He's 0-4 in his career in the playoffs. Don't worry, I was surprised when I found out too. Giants 30, Falcons 24

Steelers over BRONCOS: Sure, Pittsburgh is banged up. But Tim Tebow would need a swarm of locusts and about three other plagues to help him do anything against the Steelers D. Steelers 24, Broncos 10

Disclaimer: I can almost guarantee that my picks will go 2-2. I do it almost every single playoff weekend. Hopefully you can pick against the two I get wrong and have an undefeated weekend!