The 4-1 Vikings are one of the biggest surprises of the NFL this year, gaining confidence with every win. So why is the upcoming game against the Redskins so scary?

Everyone has something that they're irrationally afraid of. Snakes, flying, heights, needles, tight spaces, germs...the list goes on and on. These things pose no risk to us 99% of the time, yet that 1% is enough to make us freak out at the mere thought of them. Most of us know that our wild fear makes no sense. We just can't help it.

Sometimes our fears can be caused by something we saw in a movie or TV show. I remember watching the awful 1988 movie Uninvited one night with my parents and younger sister when I was about 9 years old. It was the classic basic cable horror movie that USA Network would throw on during the weekend: low budget, awful special effects, even worse acting. The plot of the movie was...well, I'll just let the movie's IMDB page give the synopsis:

"A mutated killer cat finds its way on-board a yacht."

Yup. That was it. This normal-looking house cat would wander around the ship when all of a sudden a monster would crawl out of its mouth and kill people. Don't believe me? There's even a trailer on YouTube!

I thought it was pretty funny at the time, but my sister was petrified. Being three years younger and an avid cat lover, she had nightmares about the B-flick horror movie for weeks. She knew that a monster wasn't going to come flying out of our cat's mouth to kill our family, but she didn't look at our poor cat the same for quite a while.

Personally, I probably have a mild form of arachnophobia. I don't scream like a teenage girl at the sight of spiders or cobwebs or anything like that. But I do swear like a sailor and gyrate as if I was just hit by a taser if I feel something creepy-crawly on my skin. It's not like I was attacked by a swarm of fire ants when I was growing up--the sensation just creeps me out.

You got it--none other than Robert Griffin III.

We all know that RGIII is good. We saw him win the Heisman last year. We saw him rack up over 360 yards of total offense in his pro debut. We've seen him keep the Redskins in every game despite his beat-up defense allowing the fourth-most points in the NFL through five games.

But I am straight up terrified of the guy. Every time he drops back on Sunday I'm going to get the horrible feeling that he's about to run for 40 yards or effortlessly flick a pass to a wide open receiver. I feel like the Vikings will be playing against the real-life version of Madden '04 Michael Vick. I don't even care that he's coming off a concussion and that it's only his sixth game as a professional football player. My fear of RGIII has nearly put me in the fetal position and we're still three days away from the first snap.

Maybe it's just the venue of FedExField (yes, there are no spaces in the name--I checked). We all remember the lump of coal we received last Christmas Eve in the form of Adrian Peterson's exploded knee. The Vikings won that game, but the victory knocked them out of the top two draft spots. It was nice to get the draft picks from Cleveland when they moved up for Trent Richardson, but it would have been a lot nicer to get the draft picks that Washington gave St. Louis to draft RGIII. (Yep--the 2011 Vikings couldn't even win right.)

And what if AP was at 100% now instead of only nearly back to full strength after his knee surgery? Would he be running away (literally) with the rushing title? Would the Vikings be undefeated? We'll never know thanks to that one fateful hit in Washington last year. Taking our fear theme even further, you can bet your ass that I'll cringe every time Peterson is tackled awkwardly on Sunday. "Ohpleaseohpleaseohplease just get up...don't be hurt..." THAT'S gonna be fun for three-plus hours.

On the other hand, the win last year was the Vikings' third straight victory in Washington. The Vikings had a 4-12 record away from home the past two seasons but half those road wins came in our nation's capital. Minnesota hasn't lost there since the infamous Randy Moss "walk off the field" game that ended the 2004 regular season.

Meanwhile, the Redskins have been mailing it in at FedEx lately (no pun intended). They have lost an astounding eight consecutive home games. Is recent history due to repeat itself or are these streaks finally coming to an end on Sunday? I fear that it might be the latter.

There are plenty of other statistics and facts that point to a Vikings victory this week. Washington's defense is really beat up and among the bottom in many every defensive categories (26th overall, 31st against the pass). The Vikings defense is playing wonderfully and is a top-ten unit in points and yards allowed. The Redskins already have a dozen players ruled out of the game via injured reserve or injury, including key components like Brian Orakpo and Brandon Meriweather. The Vikings are relatively healthy outside of injuries to Mistral Raymond (out) and Jerome Simpson (questionable).

But that's the thing about irrational fears. No matter how much you try to convince someone that their fear doesn't make any sense, they won't budge. I have visions of RGIII buying time with his legs and then finding Pierre Garcon and Santana Moss all alone behind the Vikings' secondary. I keep picturing the Vikings making inopportune mistakes and committing drive-killing penalties like they did in Indianapolis. I can't shake the feeling that this game is going to serve as a reality check that the Vikings aren't quite ready to take on all comers just yet.

Which is why I'm succumbing to my scelerotachodecaphobia this week. Hopefully my fear is just as stupid as that old USA Network cat movie.

(* = Since we have Thursday night games every week, I have to write my weekly picks article on Wednesday night. All signs are pointing to RGIII starting on Sunday as I write this. But if it turns out that RGIII can't go and my scelerotachodecaphobia won't be tested, I reserve the right to change my pick to the Vikings by 10 before game time.)

Here are the rest of my Week 6 NFL picks (home teams in ALL CAPS):

Steelers over TITANS: Does NFL Network require at least one hopelessly inept team for each Thursday night game? Or is it just a coincidence?

FALCONS over Raiders: You might want to start Roddy White and Julio Jones if you own them in fantasy. Just a hunch. This is my suicide pool pick of the week, now back above .500 at 3-2 after successfully picking the Giants last week. Since this game will probably be a breeze, let's go straight to your Gratuitous Picture of the Week! 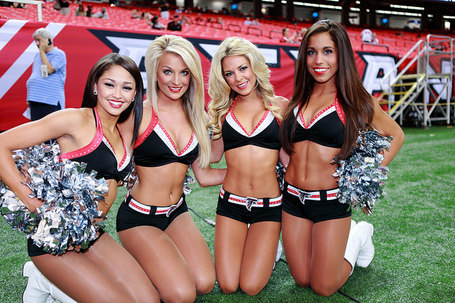 "Against the Raiders we'll get win six, but stare at our dance moves not our..." (Image via farm9.staticflickr.com)

Bengals over BROWNS: I so wanted to pick a Cleveland upset here...but then I remembered that Cleveland has lost a zillion division games in a row. The Browns are like the Vikings were heading into this season, except they're still terrible.

DOLPHINS over Rams: I thought this would be a battle of 1-4 or 0-5 teams, but Miami and St. Louis are actually respectable. I'm not convinced the Rams can do it on the road yet.

JETS over Colts: Because #TebowStrong > #ChuckStrong. (And because this seems like a big letdown game for Indy.)

EAGLES over Lions: Whoever turns the ball over less than five times wins?

BUCCANEERS over Chiefs: Brady Quinn is going to remind us exactly why he was backing up Matt Cassel in the first place.

RAVENS over Cowboys: Who will catch more touchdown passes from Tony Romo--Dez Bryant or Ed Reed?

CARDINALS over Bills: Buffalo can't stop anyone. Arizona has no running backs and Kevin Kolb. Another classic case of stoppable force against moveable object! I'll take the Cardinals at home because they still have Larry Fitzgerald.

Patriots over SEAHAWKS: The 12th Man can't defend the highest scoring team in the league. If the replacement referees were still in Seattle? Then sure, fans could absolutely come on the field and play defense. But now? Probably not.

49ERS over Giants: I usually love picking the G-Men on the road, but Jim Harbaugh is probably using the word "revenge" to his team about 2.48 million times this week.

Packers over TEXANS: Desperate team, short week for Houston...recipe for an upset. Maybe I'm wrong, but my fear this week isn't reserved only for the Vikings game. After two amazing weeks of NFL picks where I went a combined 24-5, I fear that I'm due for a clunker this week. If this pick is part of a 5-9 debacle, so be it!

Broncos over CHARGERS: I think I have the Broncos figured out: they can't hang with the top teams in the league but they can beat anyone else. I think I have figured out that the Chargers are not one of those top teams. And if there's anything to be afraid of, it's choosing San Diego and realizing that you picked Peyton Manning to play poorly in two straight Monday Night Football games. Scary.