Week 7 Preview: Vikings vs... The Vikings

The Minnesota Vikings have a favorable home match up against the depleted Arizona Cardinals. But their biggest opponent might be themselves.

Share All sharing options for: Week 7 Preview: Vikings vs... The Vikings

The Minnesota Vikings will meet the Arizona Cardinals in a game between the most surprising 4-2 teams in the NFL on Sunday. Normally it would take exhaustive statistical analysis and intricate breakdowns of specific position battles to decipher which team has the upper hand between such evenly matched teams.

Not this week. I think it's pretty simple: the Vikings will probably win if they can keep their biggest opponent of the 2012 season at bay. And no, that opponent won't be wearing red and white on Sunday. Through the first six games of the year, the Vikings' biggest foe has been obvious:

In their four wins, the Vikings have a +2 turnover differential (even with the two late Toby Gerhart fumbles against San Francisco that thankfully didn't impact the game) and have committed a grand total of 16 penalties.

In their two losses, the Vikings have a -3 turnover differential and have committed the same amount of penalties in half the time--16.

To quote the great philosopher Brodie from Mallrats, it's not like we're talking quantum physics here. The Vikes have a talented team, but they're not good enough to win if they can't get out of their own way. And that's why the Vikings worry me a lot more than the Cardinals do.

I don't mean to discredit Arizona. You don't just fluke your way to a 4-0 start in the NFL. They have one of the most impressive defenses in the league. They haven't allowed more than 21 points in any game this year. Larry Fitzgerald is still one of the best (if not the best) wide receivers in the game. And they haven't exactly played cupcakes either: all six of the teams they have played in 2012 currently have a record of .500 or better, even after the Cardinals beat four of them.

But the Cardinals fly into Minnesota with lots of broken wings, cracked beaks, and dull talons. Their top two running backs, Beanie Wells and Ryan Williams, are out for the year. Sure, William Powell looked good against Buffalo. And LaRod Stephens-Howling is a big play waiting to happen. But they weren't the starters at the beginning of the year for a reason, folks.

It gets worse when you look at Arizona's quarterback situation. John Skelton got hurt in the first game of the year and gave way to Kevin Kolb. Now Kolb is out for about six weeks as Skelton takes the reins again. Skelton's stats on the year through two games of limited action? A completion percentage of 42%, zero touchdowns, two interceptions, and a quarterback rating of 36.5. No, not the Total QBR the ESPN keeps trying to shove down our throats--he only rates 17.68 on that scale. It's the old school rating, where simply throwing every pass incomplete would actually improve what Skelton has done thus far.

So the team that won their first four games of the year is going to look pretty different when they step out on Mall of America Field. However, the Vikings still need to keep the football out of the hands of the following two Cardinals players at all costs:

If the Vikings can minimize the touches for Fitzgerald and Peterson while making sure they aren't beating themselves with untimely mistakes and penalties, I honestly don't see how they can lose this game. It's a good thing that the field turf at the Metrodome is absorbent, because the Vikings defensive front should be drooling all over the place at the chance to face Arizona's beleaguered offensive line. Arizona shouldn't be able to run against the Vikings' D. Only Robert Griffin III has done that so far, and thank heavens that we don't have to see that freak of nature again. I'll be shocked if our Daily Norseman game thread isn't full of "He went to Jared!" and "ROBISON!!!!" and "Yeah Everson!" comments after numerous sacks of Skelton.

Minnesota's offense figures to face a much greater challenge, but it's not like the Cardinals defense is impenetrable. Arizona is among the league leaders in sacks and points allowed but towards the middle in yardage allowed per game. If the Vikings can take care of the ball and, you know, actually score a frickin' touchdown or two when they get into the frickin' red zone, I think they'll be able to put up enough points for a comfortable win. If Jerome Simpson is able to go, watch out for a big play or two. It feels like he's due. After all, his famous front flip last year was against the Cards.

Simple enough, right? If the Vikings play the brand of football they are capable of playing they should take care of business.

They just need to make sure that the guys in purple and gold don't beat them.

Onto the rest of my Week 7 NFL picks (home teams in ALL CAPS):

49ERS over Seahawks: Home teams are 4-1 in the Thursday night games this year. The Niners are going to be pissed after getting embarrassed by New York last week. The Seahawks won't have the 12th Man magic to help them. Add it all up and it's my suicide pool pick of the week, now 4-2 on the year after Atlanta edged Oakland last week. (Now watch Seattle win by two touchdowns because this pick makes too much sense.)

BILLS over Titans: These two teams have been outscored by a total of 145 points this year, yet they have a combined record of 5-7. Doesn't it feel like they should be about 2-43? FOOTBALL MAKES NO SENSE SOMETIMES.

COLTS over Browns: Cleveland winning twice in a row is like NBC having two pilots in the same season that make it more than three episodes without getting canceled. In other words, it just doesn't happen.

Packers over RAMS: Funny how every single Packers fan in the world came back from vacation last Sunday night, isn't it? That must have been it, because they were oddly nowhere to be found until then. I guess Bora Bora doesn't have good wi-fi yet.

Saints over BUCCANEERS: The Bucs looked pretty solid last week. Too bad they have to play a lower-level NFL team this week--that's a big step up in competition from whatever Kansas City is putting on the field these days.

PANTHERS over Cowboys: I have a weird hunch that Cam Newton is going to put up a giant "Eff You" game to silence some of the Sophomore Slump talk. I have a much stronger hunch that the Cowboys will manage to screw the pooch late in the game again.

TEXANS over Ravens: If this game was last week? AFC CHAMPIONSHIP PREVIEW. Now that the Ravens lost half their defense and the Texans got whooped on national television? WHO WILL BE ABLE TO STOP THE BLEEDING? Gotta love how quickly story lines can turn around in the NFL.

Jaguars over RAIDERS: So there are only two late games on Sunday. Two. And this is one of them. I picked Jacksonville because...oh hell, who cares why. Let's just show our Gratuitous Picture of the Week and move on. 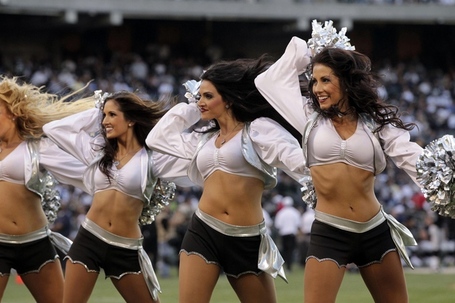 "This match up is really lame, so just watch us instead of the game!" (Image via cdn2.sbnation.com)

PATRIOTS over Jets: I suppose the Jets could win. They have had New England's number over the past few years and the Pats are really struggling to close out games. But I'm choosing the Patriots out of spite for Shonn Greene, who inexplicably ruined my perfect season in one of my fantasy leagues last week. There's nothing worse than getting pummeled by a guy that hasn't done squat the entire year. (Yes, everyone that went against Jordy Nelson last week, I feel your pain too.)

Steelers over BENGALS: You've all heard by now that the Vikings are "hosting" the Steelers in London next year. Over/under on terrible "Big Ben the player/Big Ben the clock" puns leading up to the game next September: 3.8 billion. Take the over.

BEARS over Lions: I'll be rooting for Detroit to bring the douchiest out of Jay Cutler in front of a national audience, but I don't think the Lions have it in them. Let's just hope Ndamukong Suh doesn't drive to Soldier Field, amiright?!