Week 8 Preview: What To Expect When You're Expecting (More)

A surprising 5-2 start has raised expectations in Minnesota. Are the Vikings ready to handle them?

Share All sharing options for: Week 8 Preview: What To Expect When You're Expecting (More)

This week, I finally got to share some exciting and important news with everyone on Facebook. The Minnesota Vikings are 5-2!

Wait, everyone knew that already. There was some other exciting news I shared too...oh yeah, I remember now! My wife and I are expecting our first child in April. I suppose that's pretty important too.

My Facebook profile has predictably exploded with likes and comments since we made the big announcement. To nobody's surprise, our friends and family have congratulated us and shown an unbelievable amount of support already. But I gotta be honest: it's a little weird to get comments like "You're going to be a great dad!" and "You two will make such wonderful parents!" I mean, of course I hope I'm a great dad and I know at least one of us will be a wonderful parent (she's called my "better half" for a reason). I'd like to think that I have been a good husband, son, brother, and friend thus far. Then again, I have been cruising through life at a pretty comfortable pace. It's pretty simple to keep my current lifestyle going smoothly.

There's so much more at stake now--I'm going to be responsible for the upbringing of another human being. The bar has just been raised. People are naturally going to expect more of me than they did a few months ago.

If you think about it, the Vikings have entered a similar situation as they enter their Thursday night game against the Tampa Bay Buccaneers. Nobody expected the Vikes to make a lot of noise this year. They were supposed to fly under the radar as they rebuilt toward the future. This Week 8 game is the only nationally televised match up on the Vikings' slate this year and that's by design. They weren't supposed to be a big story. But suddenly the Vikings have been propelled into the national limelight thanks to their surprising 5-2 start. They were expected to cruise through this season at a comfortable rebuilding pace.

There's so much more at stake now--if they beat Tampa Bay they have a very legitimate shot at making the playoffs. The bar has just been raised. Fans are naturally going to expect more of the Vikings than they did a few months ago.

Even with greater hopes for the team, Vikings fans shouldn't expect an easy win against the 2-4 Bucs. This is a team that had the Giants dead to rights in New York before succumbing to a classic Eli Manning comeback. The following week, they had one of the worst offensive performances of the NFL season yet still had a chance to win late in Dallas. The week after that, the Redskins beat them on a last-second field goal. Last week, they were literally inches away from two crucial scores that would have turned the tide against the Saints. I know that the old Bill Parcells adage says you are what your record says you are, but the Bucs are a pretty darn good 2-4 team.

Vikings fans shouldn't expect for Adrian Peterson to have a repeat of his NFC Offensive Player of the Week performance against Arizona either. Tampa ranks 25th in overall defense, but they're the very best in the league in opponent yards per carry (3.1). The Bucs have allowed only one team to rush for over 100 yards this year. That team happens to employ Robert Griffin III, and we all know how that guy can affect a defense's rushing statistics.

I'm going to the game Thursday with my old roommate who happens to be a huge Bucs fan. I've mentioned it here before, but he used to call Tampa's rushing defense "The Sub-Zero". He was referring to how the defense looked like the Mortal Kombat character used his "ground freeze" move against them as they slid all over the field against the rush. Now the only thing that's Sub-Zero about them is opposing rushing totals.

However, the Bucs D is still 25th overall because they're second to last against the pass. We should expect the Vikings to be able to throw all over the Metrodome, especially with Aqib Talib still under suspension. Ronde Barber has made a successful transition to safety, but he's also 74 years old. You can definitely throw on the Buccaneers. But as you might expect, the success of the Vikings' offense depends largely on one person: Christian Ponder.

I tweeted after Sunday's game that Ponder needed to take his defense out for a nice steak dinner, because nobody should win an NFL game after completing only eight passes for 58 yards. Ponder has thrown two interceptions in each of the last three games after going the first four games without a pick. He has been held under 250 yards more often than not in a league where quarterbacks practically put up 300 yard games by accident. He needs to get out of his recent funk in a big way if the Vikings expect to move the ball against the Buccaneers. It starts with making better decisions and ends with making better passes. It can't get any worse than it was last week, but how much better Ponder plays will be a big factor in the expected outcome.

The expectations are pretty similar when we look at the other side of the ball. The Vikings have been nearly as stingy against the run, provided that said running isn't a RGIII draw/scramble or a LaRod Stephens-Howling stretch play. So the Bucs will probably need to look to the air to move the chains as well. Josh Freeman had an awful start to his 2012 season but has blown up lately. He has 1,047 yards passing with 7 touchdowns and 2 interceptions in his last three games. Those are Madden-level numbers even if they were run up against three of the worst defenses in the league.

If the Vikings expect to be taken seriously in the 2012 playoff race, they need a win on Thursday. The second half of the schedule is brutal. Four games against the Packers and Bears. Road games in Seattle, St. Louis, and Houston. The Lions looking for revenge. The Vikings have some of their toughest football ahead of them so they can't afford to drop winnable games at home.

In the end, I expect a back and forth battle with lots of momentum-shifting big plays through the air. I expect a lot of trash talk and a lot of nervousness in the stands between my friend and I in the Metrodome. But I expect that the trend of home teams winning on Thursday night continues (5-1 so far this year) thanks to Ponder finding his weapons like Percy Harvin and Kyle Rudolph more frequently than he has been lately.

It certainly would be a nice "baby bump" into the second half of the season, no?

Guarantee: As soon as our kid is born, you better believe that I'm posting a picture of that little guy or girl in a Vikings onesie on Daily Norseman within the first few days after he or she is born!

BEARS over Panthers: Cam Newton handles losing football games like I handle losing board games to my wife. In other words, it's incredibly immature and nobody wants to play another game with you after you're done pouting.

Chargers over BROWNS: Unless of course, Norv Turner is blatantly trying get fired. Nothing else has worked so far, but a loss to Cleveland coming off a bye might just do it.

Seahawks over LIONS: Detroit isn't going to win until Matthew Stafford stops his dumb new strategy of "looking for the open man" and goes back to "blindly throwing it up for Calvin Johnson." It worked for Daunte Culpepper and Randy Moss all those years. If it ain't broke...

PACKERS over Jaguars: Chad Henne! Rashad Jennings! On the road against a blazing hot Green Bay team! The easiest suicide pool pick in the history of suicide pool picks! (I'm 5-2 now on the year after San Fran came through over Seattle.)

Colts over TITANS: What a troll fantasy move by Chris Johnson last week. Sure, the teams that stuck with him were finally rewarded, but they're still only 1-6.

Patriots over RAMS (in London): Aww, bloody 'ell, this game is in the UK, just like our blokes in purple'll be next year! I'm pickin' a right proper Pats rogering, I am! New England'll be on the pitch in Olde England and be all sixes and sevens...on the scoreboard! You can put a thousand pounds and fifty quid down at Ladbrokes on that one mate! Now let's go have a pint!

JETS over Dolphins: No matter which team you pick in this game, I can guarantee you won't feel good about it. Time to just post the Gratuitous Picture of the Week and move on. 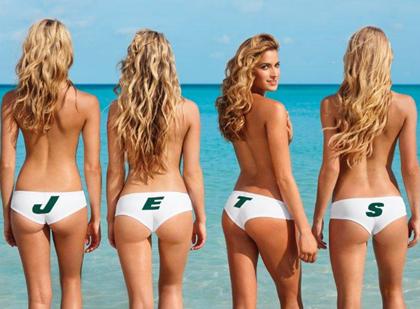 EAGLES over Falcons: Andy Reid is something like 167-0 coming off a bye week. Atlanta has escaped with too many narrow wins to keep the undefeated season going much longer. Philadelphia is actually favored. And it feels like the right time of year for Chris Berman to do his dumb champagne popping sound effect after the last undefeated team goes down.

STEELERS over Redskins: This game is going to feature more scrambles than Denny's. Zing!

Raiders over CHIEFS: Pop quiz: how long have the Chiefs held the lead in 2012? Answer: zero minutes and zero seconds. Their only lead was their overtime score in New Orleans. Don't worry, KC: at least you have the Royals. Oh...right.

Giants over COWBOYS: I picked against the G-Men for their last road game. I'm not making that mistake again.