Adrian Peterson is back, in case anyone was still curious. And check out that block by Jerome Simpson, would you?

After a long touchdown by Doug Martin. . .who else. . .the Buccaneers held a 30-10 lead over the Minnesota Vikings. Adrian Peterson then decided he was going to put the team on his back, and as you see there, he took it 64 yards for a touchdown to make it 30-17.

There's still 15 minutes of football left in this one, and the Vikings have a pretty pissed off Jared Allen on his side. Why is Jared Allen pissed off? This is why, courtesy of Donald Penn. 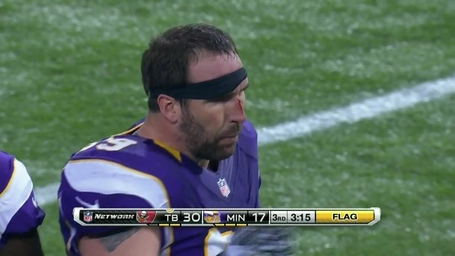 And that came as a result of this:

Should be an interesting 15 minutes of football.

Can the Vikings make what would be an epic comeback in this one? We'll find out soon enough. Enjoy the fourth quarter, folks!