I Smell A Trap

Exploring some concerns about the upcoming "easy win" against the Tennessee Titans.

Share All sharing options for: I Smell A Trap

Three weeks ago, the Vikings lost in the last seconds to the Colts, largely thanks to undisciplined play and the resulting bazillion penalties. Two weeks ago, the Vikings placed their foot firmly on the throat of the San Francisco 49ers and never relented. This last week, the Vikings did glorious battle against a divisional foe in their own home and came away the victors.

I don't recall actually who was favored in the Colts contest... call me a homer but I feel like it should have been the Vikings, especially considered their patchwork O-line at the time. I can tell you for sure however we were the underdogs against the 49ers and the Lions, and that we are the favored team as the Titans come to visit us this week.

...and somehow, that has me worried. Maybe it's just that nagging VFPD, something that will likely haunt me even a few weeks after we eventually win a Super Bowl because I won't be sure it's not just a really elaborate dream. But something... something just doesn't seem right about this. What's that, Admiral Akbar? You have something you want to say? 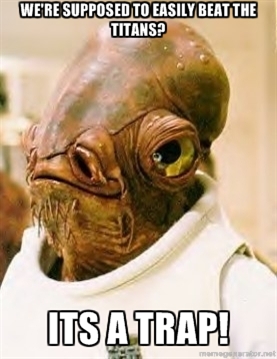 A trap?! Oh no! Trap games as we all well know are when a strong team enters a game heavily favored against a much weaker foe, and yet everyone has a sneaking suspicion that things are about to go horribly awry. And then they do. Last year's Packers- Chiefs matchup would be a great example: I know a Packers fan who called that loss three weeks in advance, he was able to see the trap coming from that far away.

There are a great variety of reasons that trap games happen. Sometimes teams just get really arrogant, and fail to take their foes seriously (like the 49ers did with us). The underdog treats the upcoming game like it's the Super Bowl whereas the on-paper-better-team doesn't even really pay attention to the game film. Sometimes there are just factors that analysts overlook, because they get too caught up in the pure x's and o's and fail to see the underlying themes that can affect the outcome. For example, a backup QB or a new QB taking over... people so, so often forget how well QBs do in that situation because teams have a tough time preparing for them, as little to no game film on them exists.

And sometimes a young team gets cocky, filled with pride after tough wins, and believes they can ‘take the next game off' because hey, it's not like the opponent is supposed to win anyways.

Is this team perfect? Heck no. Those three repaired weaknesses I listed above still need some work before taking that next step. In reality the WR corps and the O-line still needs a bit more new talent infused to become elite, and the secondary is filled with younger guys who need a bit more time to mature into their full potential. Christian Ponder's no Tom Brady yet. And Blair Walsh did miss that one field goal (although as I mentioned in the comments thread of my compliment sandwich piece, I really have little to no issue with that).

That last paragraph there is the thing this team needs to focus on. This team is not great. It's very good... but not great. Not yet. I think there is potential for this team to rise to greatness even in this very season. However, that game against the Colts still haunts me a bit, and I hope to some degree it still haunts our locker room, because it was our fault we lost. No, I'm not going with the ‘the better team lost' cliché here- I'm just pointing out that if we could get half of the penalties against us in that game back, we would have won it. Someone mentioned in the game threads (sorry, I forgot who, feel free to take due credit in the comments) that we didn't shoot ourselves in the foot that game: we howitzered our leg off. It was the classic young, undisciplined team issue that took the game away from us.

We responded the following week with one helluva disciplined, calculated and surgical dismantling of a great team. (Who in turn responded by damn near sexually assaulting the New York Jets last week themselves.) I've got to give the coaching staff- yes, even Bill Musgrave- a lot of credit for that, alongside of course cornerback/ motivational speaker Antoine Winfield.

Now they have the opposite problem on their hands. They were able to get a young team to rebound solidly from an ugly loss right into a beautiful win, but now they must get a young team to continue from another solid win without getting overconfident and arrogant. Should we win? Absolutely. But can the Titans beat us? Yes, equally absolutely. They absolutely can. (Absolutely.) This is the NFL, any given Sunday and all that blah blah blah. And let's not forget just how bizarre this season has been already, where the Cardinals can go from a solid win against the Patriots to having to duel overtime against the Dolphins just two weeks later.

Ted mentioned in his ever articulate Stock Market Report that the last portion of this season will test the Vikings to their fullest extent. Right now we can applaud our team for beating a divisional opponent on the road, something they haven't done since the Carter administration. (That might not be entirely accurate but it sure feels like it is.) And we can applaud the fact that we sit uncontested atop our division (unlike the claim of some dumb writer who thought that the Bears could contest it with a win against the Cowboys), a full game ahead of the Packers. Honestly, I can see us at the least splitting the series with the Bears if not outright sweeping them, but I'm not going to sleep on the Pack. But if the team gets swept up in the euphoria that I am currently high on, then we're going to crash and burn quicker than the Hindenburg. If we're going to the playoffs this season then we've got to enter that last stretch with as many W's as this team can humanly manage right now, and that all starts with not just beating teams we're not supposed to beat- but by also beating the teams we are supposed to beat.

This young team needs to keep their heads on straight. Whether that leadership and guidance comes from the coaching staff, veteran leaders, or a combination thereof doesn't matter. We need to go out and curb stomp the Titans, and not let up on the pressure one bit. No "playing not to lose" until halfway through the fourth quarter this time: we need to run up the score as much as possible, to put the game away as early as we can. We need to- we must- show that we can utterly destroy mid to low tier teams to take that next step towards greatness.

And above all else, the Vikings need to treat this upcoming game like the trap game it absolutely could be, and not start scribbling ‘W' next to it until the final gun sounds on Sunday.