Week 5 Preview: Change For A Quarter?

Daily Norseman previews the Vikings' Week 5 matchup with the Tennessee Titans. The first quarter of the season was better than expected for Minnesota; can we expect more of the same?

Share All sharing options for: Week 5 Preview: Change For A Quarter?

The Minnesota Vikings have had a share of first place in the NFC North division for the entire 2012 season.

But then again, we're Minnesota fans. We don't just have our guard up--we have a steel-reinforced fortress up. We remember the 2003 Vikings that started 6-0 and still missed the playoffs. We remember the 1998, 2000, and 2009 teams that looked amazing until petering out in the NFC Championship Game. We remember the Super Bowl losing teams of the 1970's. Around these parts, the success of the Vikings is directly proportional to how much the fans nervously wait for the other shoe to drop. And honestly, you can't really blame us--the worst eventually has come to fruition one way or another every year.

So why would this year be any different? The 2012 Vikings weren't supposed to make much noise in the playoff race, yet they have already matched their win total from last year a mere month into the season. Is this a classic case of the Vikings getting our hopes up only to bring them crashing back down, or is this team a legitimate contender?

NFL coaches love to break the NFL year into "quarters". There are four 15-minute quarters in a game, and there are four four-game "quarters" in a season. (I know--it's a pretty thrilling mathematical analogy. Like Calc III-level stuff, right?) If a team "wins" all four quarters of the season, they're basically guaranteed a spot in the playoffs. So naturally, NFL personnel and media alike tend to reflect back every four games and assess where each team is at. We're no different here at Daily Norseman. Ted already gave a quarterly Stock Market Report and Chris discussed how the team has exceeded early expectations at the quarter pole. And here I am continuing the trend in the weekly preview. There's no debating that the Vikings had a great first quarter in their performance and in the standings.

Still, this is the Vikings we're talking about. Kyle wrote that the upcoming game against Tennessee might be a trap game. Can a team that couldn't hold onto double-digit halftime leads in the first three games last year really be expected to hold onto their tenuous first place position this time around?

Well, maybe. Just look at last week's game in Detroit. The offense could only muster 227 total yards against the shoddy Lions D. Last year? That's a blowout loss for the Vikings. This year? The defense held firm and the special teams had two huge plays in the victory. The lack of firepower shows that this team has a lot to improve upon, but winning without their "A" game could be a sign of a good team with a good game plan.

Or was it more about a bad string of opponents instead of a good game plan? Doubters are quick to point to the Vikings' lackluster schedule. The win over the 49ers was undoubtedly impressive, but it's not like the Jaguars and Lions look like elite teams right now. Plus the Vikes lost to the Colts. Even if the Vikings get a home win over theTitans on Sunday afternoon, people will still say that the 4-1 record was built on mostly the dregs of the league.

Are the Titans as bad as their one crazy overtime win and three blowout losses imply their are? It's a valid question because our friends over at Music City Miracles have asked that exact question to their readers. Let's just say that optimism isn't exactly running high in Tennessee right now.

But in the NFL, all it takes to turn frowns upside down is 60 minutes of football. Keeping with the spirit of our theme, let's look at four key facets of the game on Sunday that will help decide how each team kicks off their second quarter.

First quarter: Adrian Peterson and Chris Johnson. What a difference 13 months can make. AP and CJ2K were the top two NFL running backs heading into the 2011 season. Now Peterson is fighting back from reconstructive knee surgery and Johnson has been running like he had about four surgeries. Johnson finally broke out with 141 yards against the Texans last week, but most running back could have run backwards every play and still had a better average than Johnson had his first three games. AP seems to be improving every week and his 122 total yard performance against Detroit was easily his best of the year. Both teams will likely look to establish the run early; the star running back that can keep his momentum moving forward best will create a big advantage for his team.

Second quarter: Christian Ponder and Jake Locker Matt Hasselbeck. Barring a miraculous recovery for Locker's shoulder injury, it looks like we'll see Tennessee's backup quarterback on Sunday. That's a big advantage against most teams, but Hasselbeck is one of the best second-stringers in the league. In fact, some Vikings fans might consider Locker the easier option to face. Hasselbeck's veteran presence and decision making might be just the thing to penetrate Minnesota's defense. Ponder needs to keep the chains moving against the Titans defense better than he did last week. Speaking of which...

Third quarter: Vikings offense and Titans defense: We might call this matchup "the stoppable force vs. the moveable object". Nobody has allowed more points than the Titans this year. They're second to last in yards allowed. They've sacked the quarterback only six times. If the Vikings can't move the ball at home against the Titans, their offense is fundamentally flawed.

Fourth quarter: Special teams: Both the Vikings and Titans have shown off potent return units. Blair Walsh and Rob Bironas have hit 15 of their 18 attempts this year. Titans punter Brett Kern has the best net punting average in the league, and we all know that Chris Kluwe is still awesome. Even though the Vikings are fairly large favorites, I think that we're going to have another uncomfortably close finish on Sunday. The special teams play could make the difference.

This is a game the Vikings should win. If they hope to have a repeat of their first four games in the second quarter of the season, then they need to prove they belong by taking care of business against the Titans.

And now for the rest of my Week 5 NFL picks (home teams in ALL CAPS):

RAMS over Cardinals: Arizona can't keep this up forever. I think their luck runs out and Greg Zuerlein hits an 85-yard field goal at the gun to end the Cardinals' dream start. (Seriously, I can't believe that Walsh might only be the secondbest rookie kicker in the league.)

BENGALS over Dolphins: Miami has been feisty this year, but they must be exhausted from losing all those overtime games.

Packers over COLTS: I'd love to watch the Colts win one for the gipper this week on a multitude of levels, but I just don't see it. Get well soon, Pagano.

Ravens over CHIEFS: Hey Matt Cassel: those fans in Kansas City aren't saying boo, they're saying....oh wait, yes, they are booing. Loudly. At you. But keep up those garbage time touchdowns to Dwayne Bowe!

GIANTS over Browns: This game might be closer than we think. After all, the Giants defense is obviously terrible--they couldn't force a single turnover from Michael Vick last week. That said, I'm still choosing New York as my suicide pool pick of the week, now 2-2 on the season after the Ravens won last week.

STEELERS over Eagles: Did you guys know that both of these teams are from PENNSYLVANIA?! I bet the talking heads will remind you of that fact about 2.3 million times on Sunday.

Falcons over REDSKINS: It's really too bad that Brandon Meriweather and Aldrick Robinson were seriously hurt in their pregame collision last week. Otherwise I could have watched that video on a loop for about three days straight. Any team that unlucky can't possibly beat the undefeated Falcons.

PANTHERS over Seahawks: Cam Newton has to be taking this matchup with Russell Wilson personally, right? Isn't Wilson just a remixed version of what Newton was last year without the gaudy stats? Carolina knows their season is over if they lose this one. I expect them to play accordingly.

Bears over JAGUARS: Jeez, it must be nice to beat up on crappy AFC South teams all year like Chicago. Oh wait...

PATRIOTS over Broncos: There will be other players on the field outside of Tom Brady and Peyton Manning, but don't expect to hear about them. The media is already treating this one like Mozart and Beethoven are getting together for one last symphony.

49ERS over Bills: It's pretty tough to get to 50 points in Madden, yet the Bills are allowing an average of 50 points per game to the AFC East. Since this one will probably be a blowout, here's your Gratuitous Picture of the Week! 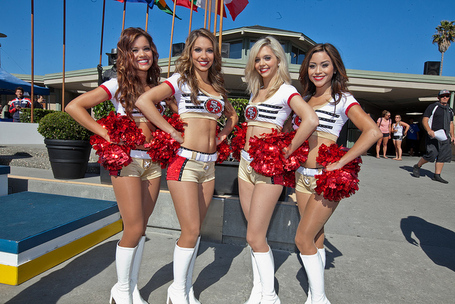 On our opponents, we'll score fifty; aren't our outfits super nifty? (via farm8.staticflickr.com)

SAINTS over Chargers: Eaux and five would be outstanding to watch on national television, but I think Drew Breeshas one of those "I don't care if we have no defense, I'm passing for a million yards and 5 touchdowns" kind of games.

Texans over JETS: The MetLife Stadium crowd is going to be rocking on Monday. Unfortunately for the Jets, it's going to be all boos. Over/under on shots of Tim Tebow on the sideline with his helmet on waiting to get in the game: 47.