The Minnesota Vikings visit the Seattle Seahawks with both teams coming off bad losses. Which team can survive to stay in the playoff hunt?

So how many professional wrestling fans do we have in the house tonight??

...wait, what are all those cricket noises?

I apologize in advance for stepping on the toes of our Fearless Leader Chris, because the realm of professional wrestling is definitely his forte. He has provided match-by-match coverage of Wrestlemania for SB Nation Minnesota in the past. He's constantly referencing pro wrestling in his articles and Facebook status updates. ("Good God, that's Joe Webb's music!") Hell, we even played SongPop against each other a couple weeks ago and he chose "Pro Wrestling" as his musical genre. (I shouldn't need to tell you who won that round.)

But I used to be a pretty big fan of WWF and WCW in high school, so I still know the basics. When I think about the upcoming match up between the Minnesota Vikings and Seattle Seahawks, an old tried and true WWE gimmick keeps coming to mind: the Loser Leaves Town match.

For the uninitiated, Wikipedia defines the Loser Leaves Town match as follows:

Loser Leaves Town is a generic term for any match where the loser has to leave the current promotion or brand. These matches were most often held during the "territorial days", when wrestlers frequently jumped from company to company. It is held with somewhat greater frequency (though still not nearly as common as in the old days) in WWE, where the losing wrestler typically leaves the brand (Raw or Smackdown), only to go to the other brand.

Obviously the loser of Sunday's game won't be forced to leave the NFL or switch conferences or play a game in a different country next year or anything like that. (Oh wait, that's right: the Seahawks already changed conferences and we're playing in London next year. But you get the point.) However, the team that fails to come out victorious will have to leave one major aspect of the 2012 season: the NFC playoff conversation.

"Whoa whoa whoa, Eric," you say. "The loser will be either 5-4 or 4-5 with plenty of season left. Aren't you jumping the gun a bit?" Perhaps, but I really don't think I'm making an overzealous statement by saying that the loser probably won't make the playoffs.

Just look at Minnesota's and Seattle's respective divisions. In the NFC North, the Bears are a game and half ahead of the Vikes and the Packers have already caught up to them after a horrid start. Minnesota's two divisional rivals have won a combined eight consecutive games. It isn't any easier for Seattle. They're two games behind the 49ers, a team that might never allow another touchdown the way they're currently playing defense.

Now let's look at their respective schedules after this game. The Vikings have an absolute gauntlet to run through their last seven games. Four games against the aforementioned Packers and Bears. At Houston. At St. Louis, a team that has been very tough at home*. (* = Non-London) And a rematch against Detroit, who just beat Seattle and is playing better. Seattle doesn't have as tough of a slate, but they still face San Francisco again along with back-to-back trips to Miami and Chicago.

I figure that it's going to take ten wins to make the playoffs in the ultra-competitive NFC this year. Do you see five wins in seven games for Minnesota after this week if they lose? How about six wins out of seven for Seattle? I don't either.

So which team will bodyslam the other out of the playoff picture? Let's break it down.

It's fairly obvious which team possesses the better defense. Seattle is allowing the fifth fewest yards per game and third fewest points per game. The Seahawks have a solid front seven anchored by a hard-hitting, opportunistic secondary. If you haven't seen much of Brandon Browner this year, go out and find some of his highlights on YouTube. You'd swear he was the progeny of former Minnesota Vikings great Joey Browner. (I checked; I'm pretty sure he isn't.)

The Vikings are a respectable 11th in the points and yardage categories but are coming off games where they got gashed by perennial superstars LaRod Stephens-Howling and Doug Martin. (Could you catch the sarcasm coming through there? I hope so.) They have allowed a combined 74 points in their last two losses.

The offensive side of the ball has been a mixed bag for both squads. Russell Wilson has provided plenty of excitement and big plays, but he can still look like the rookie that he is pretty often. Seattle has failed to score 20 points in five of their eight games this year. They haven't found much consistency through the first half of the season on offense.

Meanwhile, the Vikings' offense is saying, "Consistency? Never heard of it." At times it looks like the Vikings can move the ball at will. At other times we can get...whatever the hell that was last Thursday against Tampa Bay. Yeesh.

The only constant for each offense lies at running back. I can guarantee you that both Marshawn Lynch and Adrian Peterson are going to make a lot of defenders sore on Monday. Our game threads on Sunday are going be full of the phrase "BEAST MODE" with good reason.

Since we have two pretty evenly matched teams with similar strengths and weaknesses, we should get a pay-per-view quality game. In the end, I have a bad feeling that we won't be screaming out many Ric Flair-like WOOOOOO's on Sunday. The Vikings have proven to be Ultimate Warriors after their first two losses this year, but I think Seattle's stifling D and very tangible home field advantage will chokeslam the Vikings Undertaker-style. Unless Christian Ponder can quit playing like a CM Punk and Percy Harvin does his best Jon Cena "you can't see [or tackle] me", I don't see the Vikings scoring enough points to pin the Seahawks. And bah gawd King, making the playoffs from here on out will be Hell In A Cell. (Or Dome.)

Now for the rest of my Week 9 NFL picks (home teams in ALL CAPS):

CHARGERS over Chiefs: Even if the Vikings lose on Sunday, we can still be glad that we don't have to cheer for these two underachieving nightmares.

Broncos over BENGALS: These two teams are headed in opposite directions faster than two giant magnets with the same polarity. Yep, I just made a third grade science joke. Would you expect anything else from a guy that just made 30 pro wrestling analogies?

Ravens over BROWNS: Baltimore is going to struggle against NFL offenses the rest of the year with all their injuries. Good thing Cleveland doesn't have one of those.

PACKERS over Cardinals: Last week it was Jacksonville. This week it's Arizona. Why does Green Bay get all the easy home games? Oh yeah, we already did that--never mind.

Bears over TITANS: Good thing opposing quarterbacks are so good at throwing touchdowns to the Bears, because Jay Cutler still isn't.

COLTS over Dolphins: "This game has serious AFC Wild Card implications." Crap. I had that joke waiting for this game since Week 1, but now it's actually true.

Panthers over REDSKINS: If I keep picking Cam Newton to have a breakout game it has to happen eventually, right? Why not do it to prove a point against the new and improved version of himself and a crappy Washington defense? (Note: When the Panthers inevitably crap the bed again, forget I ever said anything.)

Lions over JAGUARS: We're sending Jacksonville to England the next four years? I thought Roger Goodell was trying to gain fans overseas.

TEXANS over Bills: I play Chris this week in the Daily Norseman fantasy football league and he has Arian Foster. Can I just forfeit now? I'm making this my suicide pool pick of the week, now 6-2 (five game winning streak!) after the Packers took care of the Jags last week. Since there's no actual analysis to add to this surefire blowout, how about the Gratuitous Picture of the Week? 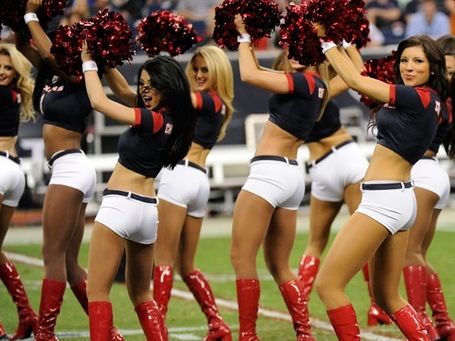 "Just watch our moves to get your thrills, 'cause even we'd score 30 on the Bills!" (image via a1hh.com)

RAIDERS over Buccaneers: I know, I know. The Bucs looked pretty great against us last week and have an extra three days of rest. But Tampa has suffered a lot of injuries and obviously has problems focusing on the game plan. How else do you explain all the Adderall?

FALCONS over Cowboys: Ohh, Dez Bryant. His hands are letting the team down even when he's making catches.

Eagles over SAINTS: Instead of a Loser Leaves Town match, can we make this a Loser Leaves National Media match? I'm sick of hearing about these two crappy teams all the time.