The Vikings head into their bye week on a good note, but Daily Norseman never takes a week off from NFL picks. Or talking about Christian Ponder.

After [number of games played] grueling games, the [team name] have a bye this week. Many think that the bye week came a little too [early/late], but the [team name] players and coaches think that the bye came at a perfect time. "It gives us some crucial time to rest up and heal some of our injuries," explained [name of head coach]. "I think we'll enjoy the week off and then hit the ground running next week."

"I'm really excited to head home and chill for a little while," said [name of star position player]. "It's a good opportunity to rest those bumps and bruises, spend some time with my kids, get my body right."

Meanwhile, [name of offensive/defensive lineman] is excited to spend some time with Mother Nature. "I've been waiting to go hunting for a while now. Me and my [brothers/buddies] are heading to [player's home state] to kill a bunch of [deer/birds/other big game]. It should be a ton of fun."

It remains to be seen whether or not the [team name] will be able to [keep their momentum going/turn their season around] after the bye. But one thing's certain: everyone at [name of the team's home offices] is enjoying the one-week reprieve from the grind of the NFL season.

I'm not saying all NFL bye weeks are created equal, but they're pretty darn close. The Vikings happen to have theirs this week, which sucks for us fans, especially those of us that usually write a weekly preview in this space. It was certainly nice for the Vikes to head into their off week on a positive note. That doesn't change the fact that they still have the same daunting final six games ahead of them, but at least we can still say those magic cliched words: "they control their own destiny". Since there's no actual game to break down this week, let's talk about the Vikings' biggest lightning rod through the first ten weeks of the season: Christian Ponder.

The play of the Vikings' second-year quarterback has had more ups and downs than a Craftmatic bed at a brothel. One week Ponder will look like he's laying the foundation of a brilliant career. He makes great touch passes, runs for big first downs, and avoids crucial mistakes. The next week he's making Tim Tebow look accurate and Joe Webb the most popular man in Minnesota since Paul Bunyan.

Ponder is part of what makes the Vikings absolutely maddening to watch at times this season. He and his teammates have the talent to beat just about anybody. For instance, we saw them handle San Francisco from wire to wire. We watched them utilize all three phases of the game in sweeping the Lions. We witnessed them put away teams they "should" beat like Arizona and Tennessee.

But there is definitely a Mr. Hyde to their Dr. Jekyll. (Or is it the other way around? I'm never sure who the bad one is supposed to be in that analogy.) As I mentioned last week, you haven't really arrived as an offensive rookie in 2012 until you have pummeled the Vikings. Their losses have ranged from "we really had a shot to win" to "we really should have turned the TV off". The degrees of failure have usually started with the quarterback position.

Christian Ponder has been a perfect microcosm of the Vikings as a whole in 2012: equal parts entertaining promise and maddening inconsistency. We know he can make the necessary plays to win games, so why the heck can't he do it more frequently?

Hmm, let's think...maybe it's because this is his only his second year in the league!

It's easy to overlook youth in the "MUST WIN NOW" quarterback era that the NFL is entrenched in. About a quarter of the teams in the league are starting first- or second-year signal callers. Ponder is practically a grizzled veteran by some standards with his 20 career starts. But NFL quarterback is still one of the toughest professions to learn in sports regardless of how many youngsters the league is currently trotting out. Even the all-time greats needed a few years to hone their craft before making The Leap.

Which is why I just shake my head when our site gets inundated with comments like "If Ponder plays poorly again this week, I think it's pretty obvious that he's not the answer long term." Really? As Cheri Oteri used to say with her recurring character on Saturday Night Live, "Simma Down Now". This is still the very beginning of what will hopefully be a long career. I'll admit that I've been guilty of a few single-serving instant overreactions after certain boneheaded plays and ugly losses. It's part of being a passionate fan. But we all have to remind ourselves where Ponder and the Vikings are overall. Ponder has improved in just about every conceivable statistical category over last year (even with his clunkers) and his team has already doubled their 2011 win total. There are still growing pains aplenty but at least the team is heading the right way if you look at the big picture. And remember, Ponder is just one of many major contributors on the Vikings that were roaming various college campuses a couple years ago.

Will Christian Ponder turn out to be the quarterback we've all been hoping for in Minnesota? I honestly have no idea. What I do know is that there are plenty more ups and downs to come. Let's just root for more peaks than valleys as our Beloved Purple attack their tough post-bye schedule.

And now for my Vikings-free Week 11 NFL picks (home teams in ALL CAPS):

Dolphins over BILLS: Miami is coming into the short week more rested. They obviously took last week against Tennessee off while the Bills clawed and scratched their way to a heartbreaking loss against New England. Dumb move, Buffalo!

FALCONS over Cardinals: Every time you see an incredible looking girl with a douchey guy, just call the girl a "Larry Fitzgerald". In other words she's wasting her amazing talents with someone that will never allow her to realize how great she could truly be. Just like Fitz and the Cardinals quarterbacks.

COWBOYS over Browns: My suicide pool pick of the week, now 8-2 on the season after Pittsburgh survived on Monday night. I'm obviously stupid to trust the Cowboys this much, but I've already picked all of the dependable teams.

Packers over LIONS: Clay Matthews is out on Sunday thanks to a bad hamstring. I told him to stretch before hanging up all those Fatheads in such hard-to-reach places.

Bengals over CHIEFS: I chose this game based on the unexpected high points that each team enjoyed last week. For Cincinnati it was "We broke a four-game losing streak and beat the defending Super Bowl champions!" For Kansas City it was "Hey we actually had a lead!" Yeah, Cincy's was just slightly better.

RAMS over Jets: Oh noes, somebody on the Jets called Tim Tebow "terrible"! Um, guys? We've all been calling your whole team terrible for a solid month now.

REDSKINS over Eagles: Yeah, Andy Reid is in pretty big trouble. In fact, I have a sneak peek of what his post-game press conference will look and sound like:

Buccaneers over PANTHERS: See, Vikings fans? At least Christian Ponder isn't going completely backwards in his development like a certain quarterback from his draft class. So he's got that goin' for him. Which is nice.

TEXANS over Jaguars: Houston is currently getting 99.34% of the picks on ESPN. To the 0.66% that picked that Jags, I have one of the two following statements: A) Picking Jacksonville just to be ironic isn't funny. B) That's nice that you're supporting your son on the team even though he's facing certain defeat.

Saints over RAIDERS: Ugh. Fine. I'll admit it. New Orleans is playing some pretty good football lately. But they're still not making the playoffs dammit! And since I have nothing nice to say about the Raiders at this point, how about I show something nice instead in the form of the Gratuitous Picture of the Week? 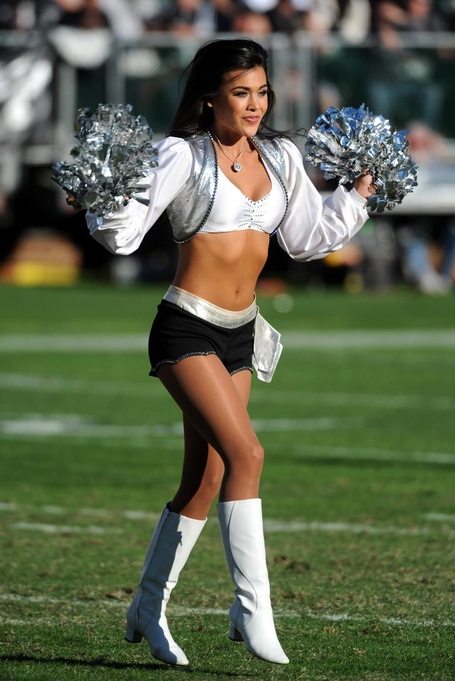 "I know you're all New Orleans haters, but we can't beat 'em, we're the Raiders!" (image via coedbc.files.wordpress.com)

BRONCOS over Chargers: San Diego has always had Peyton Manning's number, but it looks like nothing will stop Norv Turner's Farewell Tour.

PATRIOTS over Colts: If it wasn't for Chuck Pagano's inspirational battle with Leukemia, I would have a really hard time calling the Colts a "feel-good" story. They won a dozen games a year for a decade, then suck for one year, and now they're already good again? Not fair, guys.

Ravens over STEELERS: Well that escalated quickly. Big Ben's injury went from playoff-threatening to life-threatening, which unfortunately changed this game from toss-up to no-brainer.

49ERS over Bears: They should rename this one the Nucky Thompson "Where's The Pony?" Concussion Bowl. (Boardwalk Empire fans will appreciate that one if they're caught up on the current season.) I'm guessing that Colin Kaepernick vs. Jason Campbell isn't exactly what ESPN had in mind when they put this one on the slate.