Minnesota Vikings fans have quite a bit to be thankful for this season. Our team was 2-8 heading into Week 12 last year, coming off a bad home loss to the Raiders, and in the midst of what would become a six-game losing streak.

The current season hasn't always been a cornucopia of great football but the 2012 Vikings have already doubled their 2011 win total before the bye week. It's still true that a grueling schedule and unfavorable tiebreakers against Tampa Bay and Seattle mean that this team still has an uphill battle if they want to make the playoffs. That said, I think we can all be thankful that we're not already focusing on next year's draft like we were last Thanksgiving.

Thanksgiving...mmm, turkey. Mashed potatoes. Stuffing. And gravy. Sweet, decadent gravy. Sorry, we're getting too close to the Meal of the Year for me to keep my focus solely on football. So how about we combine the annual tradition of giving thanks with previewing Sunday's match up at Soldier Field?

For starters, I'm thankful for Minnesota's 2012 draft class. It feels like Rick Spielman and his staff got up incredibly early on Black Friday and made it to almost every sale before all the premium gadgets were snatched up by the masses. Matt Kalil has been a rock on the left side of the offensive line. Harrison Smith has been the hard-hitting center fielder that the secondary desperately needed. (Side note: Kalil and Smith gotta have some sort of wager on Saturday's USC/Notre Dame game, right?) Blair Walsh's cannon of a leg has been automatic on both field goals and kickoffs. Josh Robinson and Jarius Wright have made some big contributions over the past few weeks. Heck, even Audie Cole has become sort of a cult hero. If you're looking for why the Vikings have improved so much this season, take a look at the major contributions their rookies have made this year.

Of course another gigantic reason for Minnesota's success has been everybody's favorite cyborg, Adrian Peterson. I'm thankful that AP's regenerative powers make the guys from Terminator 2 look like little kids nursing owies. The physical and medical specimen wearing #28 has come back from a catastrophic knee injury to lead the league in rushing through ten games...by a lot. He averages 112.8 rushing yards and about 3.4 "holy sh*t" plays per game. I could gush about him for ten more paragraphs, but the bottom line is that I'm extremely thankful Adrian Peterson still dons the purple and gold.

I'm also thankful for Christian Ponder's resilience. Let's face it--the guy has put up some stinkers that rival a fraternity bathroom after a three-day keg and taco party. The amount of online scorn he faces can reach Lohan levels at times. But it never seems to bother him. Case in point--after Ponder's bounce back performance in Detroit, one of his first statements was "I'd like to thank my girlfriend, because obviously she has a big impact on how I play." So obviously he hears the criticism, but he still doesn't take himself too seriously. I'm thankful that our second-year quarterback is improving...and not named Blaine Gabbert.

Speaking of quarterbacks, I'm thankful for the Bears' iffy QB situation heading into Sunday's game. I'm writing this on Tuesday night due to the holiday so your guess is as good as mine right now as to whether or not Jay Cutler will play. As Chris reported on Tuesday evening, Cutler himself isn't sure if he'll play. I'm thankful that there's a possibility of Jason Campbell on the field along with a bevy of cutaways to Cutler's disinterested douche-face on the sidelines.

No matter who lines up under center for Chicago, I'm incredibly thankful for the Bears' terrible, horrible, no good, very bad offensive line. What the 49ers defense did to them on Monday night was almost criminal. The "San Francisco Smith Sandwich" (Aldon and Justin) had more shots at Campbell than the Division 3 basketball player that scored 138 points had at the hoop. J'Marcus Webb and Gabe Carimi have acted as little more than road signs to the quarterback at times this season. Remember how we said that Jared Allen and Brian Robison were drooling before the Arizona game? Lining up across from Chicago's tackles should have the same effect. I'm thankful that the Vikings have a defensive line that should cause a lot of trouble.

While the Vikings should get a solid pass rush all day, we all know which defense has taken center stage this year. The Bears are ridiculously good on that side of the ball. They get to the quarterback. They tackle well. They take the ball away at an alarming rate, and when they do they have the uncanny ability to turn it into instant points. They're the reason that Chicago started 7-3 yet has the 30th ranked offense in total yardage. If the Vikings aren't careful with the ball on Sunday, it will get ugly in a hurry.

However, I'm thankful that the Bears defense isn't invincible when they aren't causing turnovers. San Francisco proved that the formula for taming the Bears defense isn't too complex: ball security + mobile quarterback making quick, accurate throws + balanced, unpredictable play calling = victory. The Vikings are certainly capable of all these things. Whether or not they can actually execute them remains to be seen.

Before I make my prediction, I'm thankful that I went back and did a bit of research. Guess how many times the Vikings have won in Chicago since 2000? Exactly once. One. Freaking. Time. And that one time was AP's rookie year when he went off with a Herculean effort of 224 yards and 3 touchdowns. The one thing I'm least thankful for is that this game is at Soldier Field. The Vikings have sucked in the Windy City for the past decade.

I'm regretfully thankful that I have Brandon Marshall on one of my fantasy teams, because I think he's going to present all sorts of problems for the Vikings secondary. I'm thankful that the Vikings have shown they can still win despite big games from big-name wide receivers, but points are going to be much tougher to come by than they were against Detroit. Matt Forte's ground game doesn't worry me much, but I have a bad feeling that he could burn an overeager Minnesota defense with screen passes out of the backfield.

I'm thankful that the Vikes are probably due for a win in Chicago. I'm thankful that the Vikings are coming off a bye while the Bears are coming off a short week. Unfortunately, I still don't trust this team to avoid critical mistakes on the road. I see Devin Hester, a.k.a Kluwe Kryptonite, breaking one of his patented big returns. I see the Chicago winning the turnover margin and the game in a wild, back-and-forth division battle.

But maybe by Sunday of Thanksgiving weekend, the Vikings will be proving this turkey wrong and stuffing this pick back up my gravy hole. You can be thankful that I've been wrong on 2 of my last 3 Vikings predictions.

I'm thankful that it's time for the rest of my Week 12 NFL picks (home teams in ALL CAPS):

Texans over LIONS: I'm thankful that my fantasy defense is going against the turnover machine that is Matthew Stafford. (C'mon, Houston D. You owe me after allowing that many points to freaking Jacksonville!)

COWBOYS over Redskins: I'm thankful that I'll be too busy hating myself for eating too much to hate myself for trusting the Cowboys to slow down Robert Griffin III.

Patriots over JETS: I'm thankful that the Pats can finally put the Jets away for good this week so we can go back to giving zero sh*ts about the circus in New York.

BENGALS over Raiders: I'm thankful that this game isn't on Thanksgiving because it would set a world record for most simultaneous naps in front of the TV.

BROWNS over Steelers: I'm thankful that I can finally pick the Browns to win since Pittsburgh is probably rolling into town with Charlie Batch and the reanimated corpse of Plaxico Burress.

COLTS over Bills: I'm thankful that the Colts were brought back down to Earth last week so they won't be overconfident and screw this one up.

Broncos over CHIEFS: I'm thankful that my suicide pool pick each week will likely be "pick whoever's playing against the Chiefs", which is pretty easy. I'm now 9-2 on the year thanks to Dallas coming back to beat Cleveland last week.

Seahawks over DOLPHINS: I'm thankful that if Seattle continues to struggle on the road, getting this pick wrong will help out the Vikings' playoff chances.

BUCCANEERS over Falcons: I'm thankful that Atlanta has obviously used up all their good fortune this season, making it easier for me to pick the upset.

Titans over JAGUARS: I'm thankful for the Gratuitous Picture of the Week, because I sure as hell don't want to analyze this game. 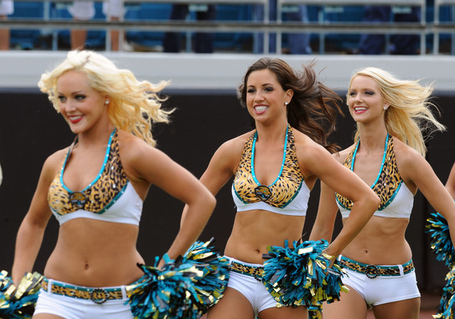 "You should give thanks this holiday, because you're not a Jags fan--yay!" (image via www4.pictures.zimbio.com)

Ravens over CHARGERS: I'm thankful that this could finally be the last season we'll have to see Norv Turner's creepy turkey neck in HD.

49ers over SAINTS: I'm thankful that San Francisco should prove to be way too physical for New Orleans, because I'm sick of all the "Here come the Saints!" stories.

Rams over CARDINALS: I'm thankful that our quarterback situation is infinitely better than the one in Arizona.

GIANTS over Packers: I'm thankful that the Giants have had Green Bay's number over the past few years. Very, very, thankful.

Panthers over EAGLES: I'm thankful that Eagles fans are so disgruntled that they're making awesome videos like this: